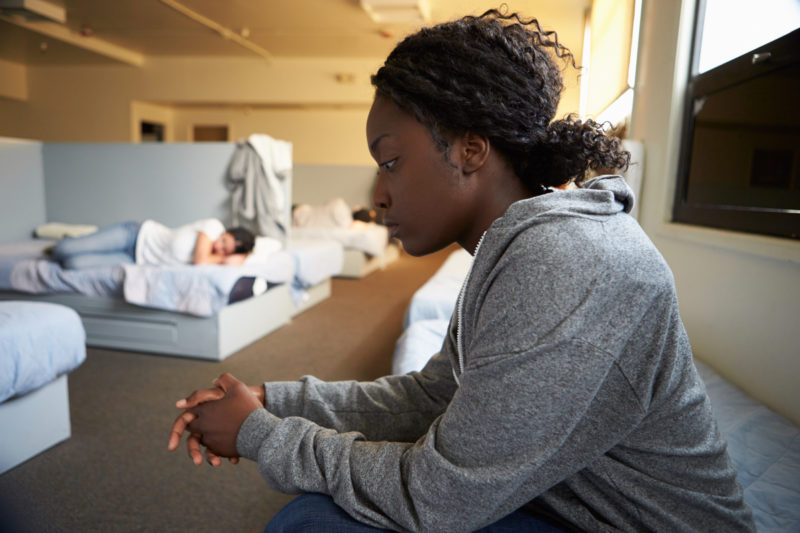 Black people are overrepresented among the homeless population. Shutterstock

For more coverage on housing justice, check out our Special Report.

Charessa Freeman, a 25-year-old Black woman and mother to a young daughter living in the Washington, D.C., metro area, has been in and out of homelessness for three years. Freeman was living with her mother when her daughter was born, but had to leave eight months later because her mother was moving and the new place wasn’t big enough for all of them. Since then, she has been in and out of housing.

The last thing a mother needs to worry about is where she and her child will sleep at night, but Freeman is not alone. Poverty, gentrification, and interpersonal violence, among other things, contribute to housing instability for expecting and parenting moms, especially for moms of color, who are disproportionately affected by both it and negative birth outcomes. Evidence indicates housing instability is associated with low and very low birth weight, preterm delivery, infants that are small for their gestational age, and maternal and infant mortality.

Homelessness and housing instability are urgent issues affecting pregnant and new parents that warrant the attention of policymakers and care providers in the United States. However, they are often overlooked in public conversations about maternal and infant health outcomes.

Housing instability is defined as having high housing costs (those greater than 30 percent of monthly income), living in overcrowded or low-quality housing, unsafe housing, frequent moving, living with family and friends, and homelessness. On any given night in 2017, more than half a million people experienced homelessness. Meanwhile, some 7 million people are at risk of homelessness, largely due to unaffordable housing.

Black people are overrepresented among the homeless population. Representing only 12 percent of the general population, Black people account for 41 percent of the measured homeless population, no doubt an effect of historical and ongoing racial discrimination that pervades U.S. education, employment, and housing systems. Furthermore, Black homeless moms have worse birth outcomes than other homeless people—a reflection of the negative maternal and infant health outcomes Black people experience overall as a result of systemic oppression.

In Washington, D.C., Aza Nedhari, co-founder and executive director of the perinatal family support organization Mamatoto Village, reports that around one in three of her clients, like Charessa Freeman, are homeless or at risk of being homeless at the time of intake into her program, meaning they are often months behind on their rent and will soon be evicted. For her pregnant clients, Nedhari said housing is one of the first things her organization addresses. “That’s an urgent need,” she told Rewire.News. “It takes about a week. By the end of that week, we’ve gotten her somewhere so she’s not sleeping on the bus, sleeping on the sofa, sleeping in her car, different places that people sleep.”

Mamatoto Village cared for Freeman when she was pregnant and recently helped her secure housing, for which Freeman is grateful. “I really felt supported and like my life mattered and my child’s life mattered. They were there for whatever I needed. It’s a very caring environment and you feel like people are there for you,” she told Rewire.News.

Nedhari and her team of community health workers recognize the importance of stable housing to good birth outcomes. Among other things, homelessness makes it difficult for expecting families and parents to obtain quality, affordable care if they’re forced to relocate to a community without such access.

Importantly, a Los Angeles study found that the severity of homelessness was predictive of preterm birth and low birth weight beyond the person’s ability to access prenatal care and other risk factors. Meaning that, the experience of homelessness and housing instability affect pregnant people beyond their ability to access health care. For example, inconsistent access to food and the mental stress of not having a permanent residence can take its toll.

Other facets of housing instability cause harm to pregnant people. One study found that neighborhood blight was associated with poor birth outcomes. In the study, community level housing damage, property disorder, and vacancy were associated with increased likelihood of preterm birth, birth weight, and small size for gestational age. Housing instability is also identified as a risk factor for maternal mortality or death from pregnancy-related causes.

Gentrification greatly contributes to the displacement and housing instability of people of color. Nedhari said that D.C.’s rapid gentrification is affecting her clients. “It drives up cost of housing and rent. They end up evicted and displaced. Trying to get out of the homeless cycle is not easy. They really struggle to get enough resources to be able to get a place …. Some leave the district altogether, some are homeless.”

Nationwide, gentrification pushes people out of their homes to create space for wealthier, and most often white, residents. Generational poverty may make this pattern of eviction and displacement seem like the norm. “For some families in D.C., there are generations of poverty where being evicted is a normal part of the experience. That is not normal. It’s not normal to be evicted out of your home. It should not be like, ‘This happens to everybody,’” Nedhari said.

Sometimes, public housing programs benefitting low-income families can have the effect of supporting population displacement, which can lead to the needs of those displaced communities being completely overlooked. Jessica Roach, co-founder and executive director of Restoring Our Own Through Transformation (ROOTT), recalls examples of how Black communities in major cities were and are still being displaced. “When evaluating where Section 8 vouchers and subsidized housing is offered and available, we need to be cognizant of how this can also create a displacement of population, therefore skewing data by simply moving demographics. We have seen examples of this in Chicago with the closing of subsidized housing like Cabrini Green, in Columbus, Ohio, with the closing of Poindexter Village, and revitalization of areas like Weinland Park. By moving folks out of a neighborhood, it gives the illusion via statistics that health disparities have been addressed versus the reality of those that formerly represented those numbers are no longer counted because they are not there.”

Even as gentrification continues to take its toll, there is a need for housing programs that work, especially for expecting parents and families. In D.C., Community of Hope helps families move from shelters into housing they can afford. One of 13 rapid re-housing programs in the district, Community of Hope’s in-house services support 211 families each month with their housing, employment, and health needs. Dana Looper, program director for rapid re-housing at Community of Hope, said they work to meet each client’s specific needs, including pregnant individuals. “Several of our clients do expand their family, but pregnancy is not a happy event for everyone. We check in with how they’re feeling. We go over what their needs and concerns are. We look at what those things are and help them work through that,” Looper said.

Meeting client needs while they’re in the program can range from something as simple as providing a humidifier for better breathing to helping them deal with intimate partner violence. Looper continued, “We want to make sure the housing environment isn’t causing stress to their pregnancy.”

Expecting families are connected to Community of Hope’s in-house health and birthing center where they can enroll in group prenatal care and have their health care needs met. There, moms are supported from pregnancy through the child’s first year. Community of Hope also partners to make sure material needs like diapers, wipes, formula, and pack-and-plays are met.

Other housing programs across the country also support growing families. For example, the Boston Public Health Commission identified housing instability as having an impact on maternal health and birth outcomes through their home visiting program and partnered with the Boston Housing Authority to create a program specifically for housing-insecure pregnant women who also have medical risks. In addition to getting participants placed in housing, the program, Healthy Start in Housing, provides intensive case management services where public health nurses and case managers provide education, tools, and resources on tenant rights, budgeting, and community resources. A 2014 evaluation indicated that the program led to improvements in participants’ physical and mental health.

In Ohio, a pilot program, Healthy Beginnings at Home, seeks to reduce infant mortality by improving housing stability among pregnant women. The program will provide pregnant women with housing assistance and connections to health care and social services for 24 months, and is designed to determine whether housing stability leads to improved birth outcomes.

While these efforts to house pregnant individuals and families are necessary and welcome, program implementers must design them so that people are stable and thrive after the program ends. Nedhari and Roach have questioned whether many short-term housing programs lead to long-term stability.

Nedhari said, “There needs to be more accountability on the side of systems providing services in helping people to maintain that place after the year is over. After a year, the rent goes up to the market rate. If TANF [welfare] is your primary source of income, that’s not enough to cover rent and utilities at the same time.”

Roach agreed. “Rental assistance, in particular with ‘pilot’ programs, create a short-term fix versus long-term stability. If policy is not enacted concurrently with these programs that will price-fix or stabilize rental increases based on inflation rather than gentrification, at the end of the pilot, what safeguards are in place? Private landlords will be free to raise the cost of their rental properties, leaving the opportunity for a ‘rebound’ effect of instability.”

The solution? Like maternal health broadly, Nedhari said that the issue of homelessness can’t be treated in a silo. “You can’t treat as a symptom without looking at the whole disease. Otherwise, you create chronic cycles of homelessness.” Systems-level policy change that addresses unequal distribution of resources such as education and life-skills training, jobs, health care, child care, and transportation will be required to see better outcomes in the long term.