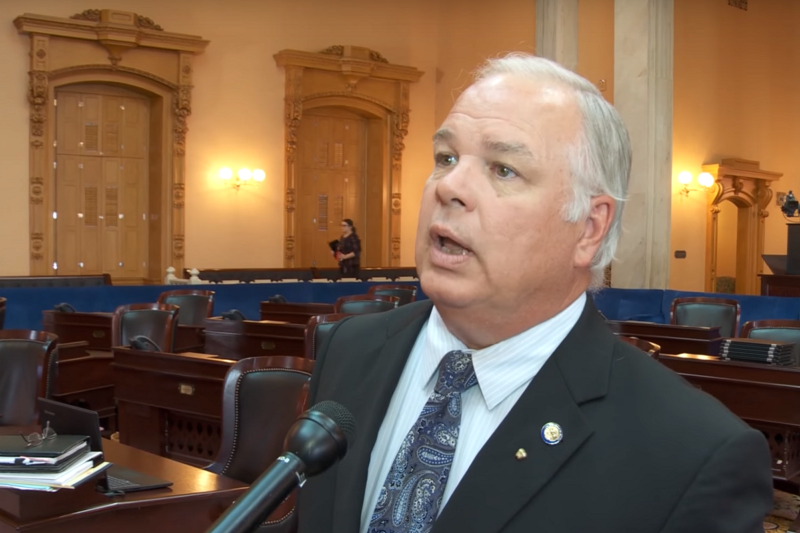 When State Sen. Joseph Uecker (R-14) testified on behalf of the bill to the House Health Committee back in January, he invited members to join him in "protecting the dignity of human life" and before the vote he stated the bill would "honor the dignity of the unborn." Ohio Senate Republicans / YouTube

The Ohio House Health Committee voted last week to advance SB 28, a bill that would amend state law to require clinics that perform surgical abortions to unnecessarily dispose of any fetal remains by cremation, burial, or entombment. SB 28 already passed through the Ohio Senate earlier this year. If enacted, clinics would be responsible for absolving the additional cost—and in some cases, the person seeking abortion care could be responsible for the financial burden.

Health-care providers already must follow state-specific guidelines on the disposal of medical waste, including embryonic tissue. Fetal disposal laws, however, attempt to make a distinction between fetal remains and other medical waste, which creates unnecessary and onerous financial and logistical barriers for clinics and physicians.

While Ohio is the first state in 2018 to advance a fetal disposition bill, it is likely that other states will follow suit—continuing a pattern that has been decades in the making. Indeed, Mississippi has also introduced a fetal tissue bill, SB 2148, which would require remains to be disposed of by burial or cremation.

Fetal disposition bills began to gain traction in 2015—likely thanks to a push from the anti-choice legislation mill Americans United for Life—but reproductive rights advocates have been fighting against them for decades. In fact, this is not the first time Ohio health-care providers and patients have been faced with this issue. In 1982, the Akron Center for Reproductive Health challenged an ordinance (passed in 1978) that required physicians to dispose of fetal remains in a “humane and sanitary manner.”

Just a few years later, a case was brought to Minnesota courts challenging a 1987 law that requires all hospitals, clinics, and medical facilities in Minnesota to provide a “dignified and sanitary disposition” of fetal remains from abortion or miscarriages “by cremation, interment by burial, or in a manner directed by the commissioner of health.”

Planned Parenthood of Minnesota and Dr. Mildred Hanson challenged the law in 1989. The district court found it unconstitutional, ruling that the language was vague and infringed on a woman’s right to an abortion. A permanent injunction was placed on the law that year, but the State of Minnesota appealed; in 1990, the U.S. Eighth Circuit Court of Appeals reversed the district court’s ruling, ending the injunction.

Reproductive health and rights advocates worry that unlike Minnesota, which has had decades to accommodate to the law, newer bills could undermine access to abortion care for those most vulnerable in states like Ohio. The barrage of targeted regulation of abortion provider (TRAP) laws in recent years have made states like Ohio even more vulnerable to these kinds of attacks.

“Ohio politicians are on a crusade to ban abortion in the state …. This bill is yet another attempt by Ohio politicians to interject government into personal, private medical matters between a woman and her doctor,” said Jerry Lawson, CEO of Planned Parenthood Southwest Ohio Region, in a statement to Rewire.News.

“It’s designed to drive up costs,” said Gabriel Mann, communications manager for NARAL Pro-Choice Ohio, to Rewire.News. “There’s no reason for any of this and it puts abortion access out of reach for lower income women.”

Other similar battles have been fought in Indiana, Texas, and Arkansas. In fact, in January, a federal judge in Texas blocked a similar fetal burial law, SB 8. This is the second time Texas has tried to undermine reproductive rights through a cremation or burial rule—the first time was through the state Health and Human Services (HHS) Commission directly. A U.S. District Judge also struck the HHS rule down in 2017, determining that it, according to the Texas Tribune, caused “undue burden” and had potential for “irreparable injury.”

As far as Mann is concerned, the unconstitutionality of these bills has already been determined by the courts—and pursuing legislation is simply a waste of taxpayer dollars.

“These variations of TRAP laws place an undue burden on access and are blatantly unconstitutional,” Mann said. “These kinds of unconstitutional restrictions won’t get through the courts here in Ohio.”

Like other TRAP bills, advocates say this legislation is meant to shut down clinics with cost-prohibitive requirements. In the wake of the Ohio bill’s advancement earlier this year, Joanna Saul of Planned Parenthood Advocates of Ohio told Cincinatti.com that if funeral homes or cremation facilities won’t work with them, “Abortion providers could be forced to close, restricting or even eliminating access in the state.”

Most precursors to SB 28 have been blocked as unconstitutional. But as more conservative judges are appointed under President Trump’s administration, and more states propose similar legislation, that outcome isn’t guaranteed. And because of the multifaceted and sometimes subtle ways in which these bills are written, their passage could have pervasive and widespread consequences in addition to state-specific clinic closures.

For instance, fetal disposition bills also serve to both shame women and move towards a cultural shift to fetal “personhood.”

When state Sen. Joseph Uecker (R-14) testified on behalf of the bill to the House Health Committee back in January, he invited members to join him in “protecting the dignity of human life” and before the vote he stated the bill would “honor the dignity of the unborn.”

In a press release by NARAL Pro-Choice Ohio, Deputy Director Jaime Miracle underscored the true intentions of bills like SB 28. “This bill isn’t about making sure women have options, it’s about limiting which options exist,” he said. “The only thing the bill sponsors care about is shaming women who chose to have an abortion and the medical professionals who provide abortion care.”

With that in mind, it’s noteworthy that Ohio’s proposed SB 28 not only requires abortion facilities to dispose of fetal remains by cremation or burial, but also expands the overall language of the state law related to abortion to include zygotes and blastocysts (in addition to the previously specified embryo and fetus).

A zygote is the first stage of development for a fertilized egg—once it becomes a blastocyst, it implants itself on the wall of the uterus. It’s only then that it becomes an embryo. Including earlier stages of fertilization in a bill about fetal burial could have secondary consequences. This language, or its equivalent, is often used in fetal personhood laws. For example, you might remember last year when congressional Republicans tried to push a fetal personhood bill through that would classify life as beginning at “the earliest stage of development.” A bill like that could, in turn, outlaw abortion and some kinds of contraception.

The push for fetal disposition laws is taking place on multiple fronts—in government agencies, state legislatures, and courts. Strategies to push back also have to be coordinated. It is not enough to hope that the courts will strike down these unconstitutional bills and policies if passed; reproductive rights activists have to continue to submit public comments, meet with state legislators, and inform people about the harm these bills pose.