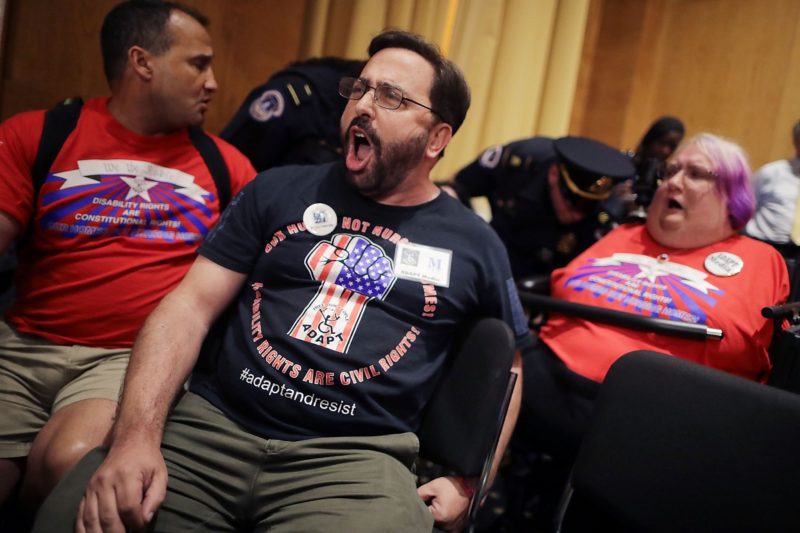 Because disability transcends all identities—including race, ethnicity, immigration status, religion, gender identity, and sexual orientation—all issues are "disability issues," and all assaults by the Trump administration are personal for people with disabilities. Chip Somodevilla/Getty Images

Donald Trump promised voters that he would be unlike his predecessors. And his first year in office has made that clear: It has been marked by incessant and unprecedented assaults on the rights of people from historically marginalized communities, including people with disabilities.

Of course, there were signs before the presidency of what was to come. During the election, a survey revealed that the majority of people found Trump’s most offensive action to be the time he apparently mocked a reporter with a disability. On multiple occasions, Trump’s properties have been investigated for violating the Americans with Disabilities Act (ADA). And shockingly, Trump once had a child with a disability removed from one of his campaign rallies.

And his first year has followed that pattern: It has threatened nearly every facet of life for people with disabilities.

“It feels like the clock is being rolled back due to the attacks on the rights and policies that have been won over the past decades,” Vilissa Thompson—a social worker, disability consultant, and writer in South Carolina, as well as the founder of Ramp Your Voice! and co-host of the Wheelin’ & Dealin’ podcast—told Rewire. “It is disheartening that we have to take a stand on the basics: education, health care, et cetera. Instead of doing what it needed to fix gaps, the current administration is doing what it can to widen them.”

Rebecca Cokley, senior fellow at the Center for American Progress, agreed, saying Trump’s first year has “been chaotic and exhausting and feels like we are drinking from a flamethrower.”

Cokley noted that the attacks on vulnerable groups have been multi-pronged: “We are in a constant state of pivoting from one fight to the next and when we have a chance to take a breath on disability issues, they’re back attacking women’s issues, and vice versa.”

One of the main attacks on autonomy for people with disabilities was Republicans’ fight against the Affordable Care Act (ACA), egged on by the president. Over the summer, people with disabilities, particularly members of the grassroots group ADAPT, gained national attention for successfully battling the repeated attempts to repeal the ACA. Beginning with a “die in” staged outside the office of Sen. Mitch McConnell (R-KY) in late June, ADAPT held dozens of direct actions—at both the U.S. Capitol and congressional offices across the country. For people with disabilities, saving the ACA was a matter of life and death.

Last week, the Trump administration delivered another blow to health care by allowing states to impose work requirements for people who receive Medicaid. Despite the GOP’s claims, Medicaid work requirements will likely harm people with disabilities and will result in fewer disabled people receiving Medicaid.

“The work requirement proposed by some states for people receiving Medicaid is alarming AF to me as a disabled person. I’ve had people tell me disabled people shouldn’t worry because there will be exemptions. As someone on Medicaid, I know these programs vary widely and there will be people caught up or mistakenly classified. Guidelines, regulations, and good intentions are always mediated by individuals who have their own interpretation of what’s right,” Alice Wong, founder and director of the Disability Visibility Project, told Rewire via email.

Wong also fears cuts to other services aimed at low-income people that would likely target people with disabilities. “I’m not a policy expert, but I have a feeling there will be an accelerated and coordinated attack to dismantle various safety programs in the name of ‘reform,'” she said.

The disability community is also contending with multiple attempts by both Congress and the administration to undermine the ADA, the 27-year-old civil rights law for people with disabilities. Currently, Congress is considering the ADA Education and Reform Act of 2017 (HR 620), sponsored by Rep. Ted Poe (R-TX). Despite its name, if passed, this legislation will impose significant barriers to enforcing the ADA and will likely decrease compliance by businesses. This dangerous bill has passed the House Judiciary Committee and is awaiting a full House floor vote.

Moreover, the DOJ officially withdrew pending regulations that explained how the ADA applies to websites—something advocates have been trying to get passed for seven years.

In addition, proposed budgets by the administration have included drastic cuts to funding and staff for offices that enforce civil rights at the DOJ, the U.S. Department of Education (DOE) and the U.S. Department of Housing and Urban Development (HUD). These proposed budget cuts unmistakably demonstrate that enforcing civil rights laws—including those that protect people with disabilities—is not a priority of the Trump administration.

Students with disabilities were also not safe from attacks by the U.S. Department of Education. Even before becoming DOE secretary, Betsy DeVos demonstrated her lack of concern for disabled students when she struggled to answer basic questions about the Individuals with Disabilities Education Act (IDEA) during her Senate confirmation hearing. DeVos is a staunch proponent of increasing the availability of private school vouchers, which disability advocates and families fear will harm disabled students. In addition, in October, the DOE withdrew 72 guidance documents that detailed the rights of students with disabilities. Currently, DeVos is contemplating rescinding an Obama-era guidance aimed at ensuring that school discipline policies do not discriminate against students of color as well as disabled students. Further, DOE recently announced its intention to delay implementation of another Obama-era rule designed to ensure that students of color are not overrepresented in special education. Without these regulations, states will be allowed to continue to inappropriately educate students of color.

In December, the GOP passed—and Trump signed into law—the Tax Cuts and Jobs Act of 2017, hailing this tax reform bill a win for everyone. While this bill will leave wealthy people far better off, people with disabilities will likely face greater tax burdens and decreased opportunities to live the life they choose. The bill includes massive cuts to Medicare and other safety-net programs and eliminates tax incentives for small businesses to modify their facilities to ensure accessibility for people with disabilities. Moreover, because the law includes a repeal of the ACA’s individual mandate, health insurance premiums will undoubtedly climb, leaving them unaffordable for many—including people with disabilities.

Because disability transcends all identities—including race, ethnicity, immigration status, religion, gender identity, and sexual orientation—all issues are “disability issues,” and all assaults by the Trump administration are personal for people with disabilities. For example, the ever-growing attack on immigrants by the administration has implicated the disability community in numerous ways. In October, federal immigration officials made headlines after detaining Rosa Maria Hernandez, a 10-year-old girl with cerebral palsy, after she underwent surgery. Last week, federal officials announced that the government would deport Yancarlos Mendez, who is the sole caregiver of Ricky Solis, a 6-year-old boy with paraplegia.

“Trump’s cruelty toward disabled people trying to access the American dream has been relentless, and it’s been hard,” Colleen Flanagan, a disability rights activist and co-founder of the political action committee Disability Action for America, explained to Rewire.

As Thompson told Rewire, “It is overwhelming to wake up and wonder what is next on the Administration policy ‘hit list.'”

But Trump’s first year has also shown the power and resilience of people with disabilities. “Seeing the power of the disabled community come together and proclaim our humanity and demand to not be dismissed [was] empowering. We are showing how influential we are, which resulted in shake-ups politically,” Thompson said.

Wong agrees, explaining to Rewire that Trump’s actions have raised society’s awareness of disability rights, and that’s a good thing: “The one upside is that a lot of folks suddenly realize they have a lot at stake along with older adults and disabled people. The attempts to repeal the ACA showed how the need for affordable, basic health care cuts across almost every population. We are all going to lose unless we fight together.”

As we begin the second year of Trump as president, people with disabilities are keenly aware of what’s at stake. Flanagan believes that the 2018 midterm elections mark an important turning point: “This year we must mobilize the disability vote. To win the fight for disability rights, we need to elect leaders who value disability rights. This year, the disability vote will take revenge on the elected officials who used supports and services that millions of people with disabilities depend [on], as a bargaining chip. The disability vote won’t forget the elected officials who refused to listen during town halls, and ignored our phone calls, emails, and tweets that asked them to use their power to save healthcare for the many and not just the privileged few.

“We will remember in November and we will make them regret underestimating the power of the disability vote,” Flanagan concluded.

Disability has historically been a bipartisan issue. However, it is clear that things have changed and the Trump administration and the GOP writ large are comfortable waging war on disability rights. It is equally clear that people with disabilities are not backing down.