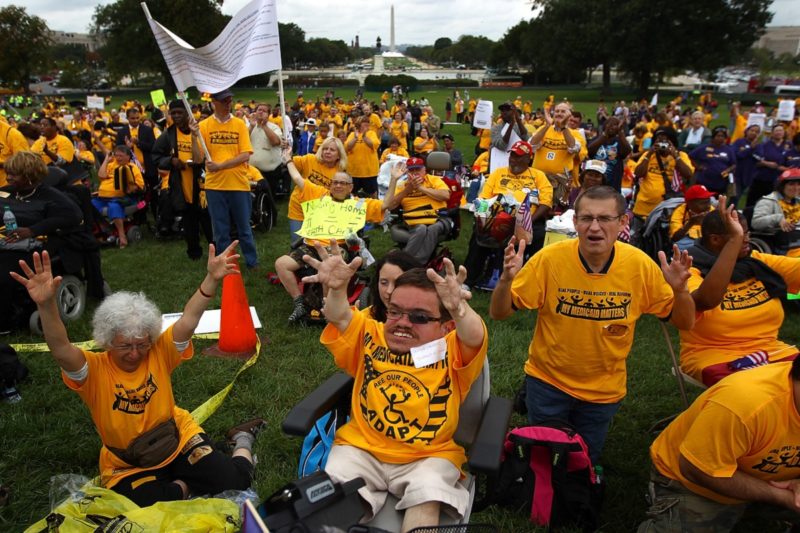 Remember when then-candidate Donald Trump assured voters that he would not cut Social Security, Medicare, or Medicaid? Apparently, this was just one of countless broken promises. Although he has not yet imposed any explicit cuts, on Thursday, the Trump administration took another step toward undercutting these essential social programs: It issued guidance allowing states to impose work requirements on Medicaid beneficiaries. This staggering and unprecedented change in health-care policy is expected to adversely affect millions of people in the United States, particularly those with disabilities.

Republicans have unwaveringly asserted that work requirements will only apply to people who are “able-bodied.” This claim is simply untrue. The disability exception promulgated in the new rules only covers people who receive Supplemental Security Income (SSI) or Social Security Disability Insurance (SSDI). In other words, anyone who has a disability and does not receive SSI or SSDI would likely need to adhere to the new work requirements, should their state implement them.

“While [Thursday’s] guidance exempts people on SSI and SSDI from work requirements, millions of other people with disabilities access the [Medicaid] program on the basis of income or other non-disability characteristics,” Ari Ne’eman, an Obama administration appointee to the National Council on Disability and author of a forthcoming book from Simon & Schuster on the history of disability in the United States, told Rewire.

To receive SSI or SSDI, a person must meet the Social Security Administration’s (SSA) stringent definition of disability: “the inability to engage in any substantial gainful activity (SGA) by reason of any medically determinable physical or mental impairment(s) which can be expected to result in death or which has lasted or can be expected to last for a continuous period of not less than 12 months.” Put differently, one’s disability must be deemed so significant that they are unable to work in any type of job.

According to Rebecca Cokley, senior fellow at the Center for American Progress, “Cancer survivors, some chronic conditions, people with mental health disabilities, and those who are substance abuse survivors will likely still be impacted, as often these are folks who get Medicaid, but don’t meet the qualifications for [SSI or SSDI].”

Qualifying for SSI or SSDI is no small feat and most people who endure the lengthy application process do not ultimately receive benefits. In fact, fewer than four in ten applications for SSI and SSDI are ultimately approved. Moreover, applicants often are forced to wait years and go through many appeals processes before receiving SSI or SSDI; 10,000 people died last year while waiting for their appeal to process. Nonetheless, people with disabilities “will be forced to navigate a byzantine bureaucracy to qualify for [the work requirement] exemptions,” Ne’eman said.

The Trump administration’s new work requirements will negatively impact people with disabilities in countless ways, including how they are cared for. According to Ne’eman, “Work requirements also severely burden family caregivers, who may be providing substantial unpaid labor to help support a parent, child, or sibling to remain in the community” and who themselves may be receiving Medicaid.

Notably, data from the Kaiser Family Foundation demonstrates that nearly eight in ten adult Medicaid recipients live in working families and a majority are employed. Among those who are not working, most reported impairments that limited their ability to work—although the foundation noted that those qualifying for Medicaid on the basis of SSI were not included in the survey. Other reasons for not working include caring for a loved one or one’s home (30 percent), attending school (15 percent), inability to find work (6 percent), and being retired (9 percent).

Although this is the first time the federal government has allowed states to impose work requirements for Medicaid, similar rules have previously been implemented for other programs such as the Temporary Assistance for Needy Families (TANF), also known as welfare, and the Supplemental Nutrition Assistance Program (SNAP), previously referred to as food stamps. “We saw in previous attacks against TANF and SNAP even though it was claimed that the disability community wouldn’t be impacted, they were,” Cokley told Rewire.

Indeed, research has consistently demonstrated that TANF recipients who are penalized for failing to meet a work requirement are more likely to have a disability compared to those who are not penalized. For example, researchers found that people with severe but temporary disabilities who receive TANF are generally not exempt from work requirements and often lose benefits for not complying, despite facing considerable barriers to employment because of their disabilities.

According to the Washington Post, ten states have been “waiting for federal permission” to implement this program, and others are close at hand. On Friday, Kentucky became the first state to have its Medicaid work requirements approved. People with disabilities successfully saved the Affordable Care Act for millions of people. Now it’s time for others to join the fight and stop the Trump administration’s disastrous work requirements.