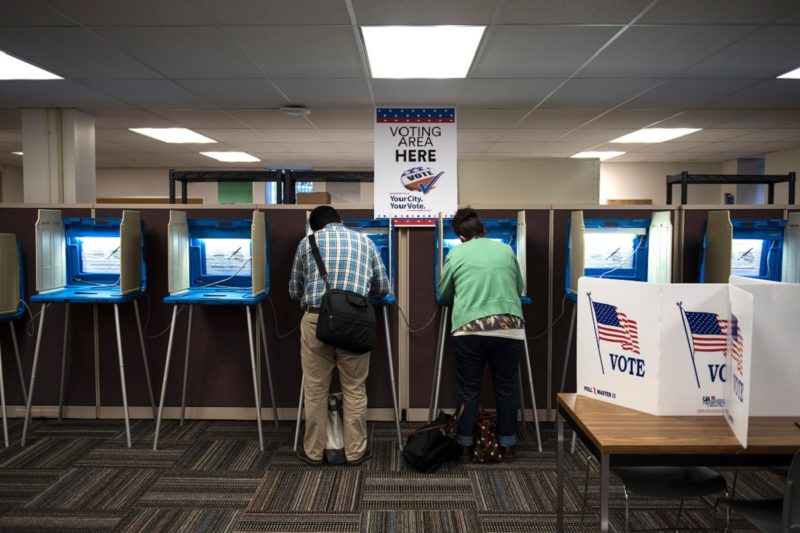 Vanita Gupta, president and CEO of The Leadership Conference on Civil and Human Rights, suggested that the true aim of Trump’s efforts was to lay the groundwork for policies that could keep some eligible voters from the ballot box. STEPHEN MATUREN/AFP/Getty Images

Though there is no proof of widespread voter fraud, a statement released by the White House Office of the Press Secretary cast blame for the commission’s demise on the “many states [that] have refused to provide” it with information despite what it claimed was “substantial evidence of voter fraud.”

“Rather than engage in endless legal battles at taxpayer expense, today President Donald J. Trump signed an executive order to dissolve the Commission, and he has asked the Department of Homeland Security to review its initial findings and determine next courses of action,” the statement said.

Trump blamed “Democratic states” for refusing to comply with the commission’s inquiries in a Thursday morning tweet, though according to CNN, 44 states—some of which are run by Republican officials—said they would not turn over some or all of the information requested by the probe. The president called for voter identification laws to be implemented.

Courts have found that such laws have intentionally discriminated against voters of color. Voter ID laws keep many from the polls and disproportionately hurt voters with low incomes, the elderly, and people of color.

Voting and civil rights advocates cheered the dissolution of the commission, which faced a series of lawsuits, but some noted that its demise did not necessarily mean the end of the Trump administration’s inquiries into the matter. The administration could also still move forward with voter suppression efforts such as voter roll purges or voter identification laws.

“It is clear from the White House’s statement this evening that American voters still need to be protected from this administration’s hostility to voting rights and secure elections,” Karen Hobert Flynn, president of Common Cause, said in a statement reacting. “The first question among many is what the commission intends to do with the data that it has already collected from the states.”

Vanita Gupta, president and CEO of The Leadership Conference on Civil and Human Rights, suggested that the true aim of Trump’s efforts was to lay the groundwork for policies that could keep some eligible voters from the ballot box. “The sham commission was a political ploy to provide cover for the president’s wild and unfounded claims of mass voter fraud, and to lay the foundation to purge eligible voters from the rolls,” Gupta said in a statement.

The “Presidential Advisory Commission on Election Integrity” was led in part by Kansas Secretary of State Kris Kobach, who implemented voter suppression efforts in his home state, such as a law requiring proof of citizenship to register to vote. According to the New York Times, “Kobach insisted in an interview that the commission’s work would not end but rather would be transferred to the Department of Homeland Security, one of the federal agencies charged with ensuring election integrity and one that he said critics would find more difficult to target.”