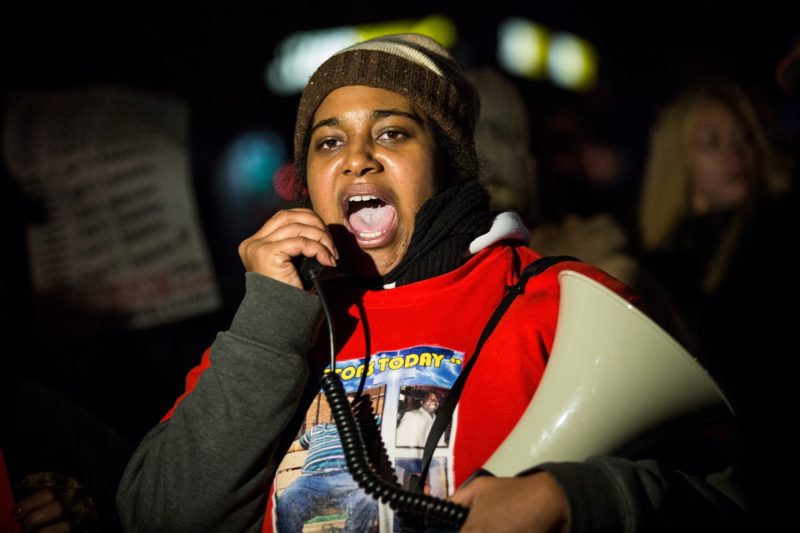 Diagnoses like those of Erica Garner tell stories of individual health risk factors. But diagnoses themselves don’t conceptualize the root cause of disease or death. Andrew Burton/Getty Images

Erica Garner was a “strong Black woman.” For many, she epitomized this seemingly positive stereotype by choosing to use her tragedy and loss to work toward systemic and structural change. She carried the weight of her community and, as the stereotype goes, persisted despite unimaginable stress and setbacks.

But “strong Black women” are not immortal.

On December 30, Erica Garner died at age 27 after her second heart attack since giving birth to a son in August. According to media reports, her cause of death was peripartum cardiomyopathy, a rare condition generally occurring during late pregnancy and the postpartum period; it is a weakness of the heart due to multiple factors, including exposure to stress.

Erica Garner was the daughter of Eric Garner, who was choked to death by a New York City Police Department officer in 2014  and whose death gave us one of the most haunting refrains of the Black Lives Matter movement: “I can’t breathe.” In the wake of her father’s killing, Erica Garner became a diligent activist who spoke with relentless fervor about law enforcement violence and police racism. But, quite frankly, her work and loss were likely factors in her premature death. Erica Garner’s life and death, as well as her family’s public struggles for justice, are powerful, yet unfortunate proof that those struggles manifest in the bodies of those already battered by racism. And while we do not know details about her pregnancy, postpartum care, or overall health, there is no denying that the stress of her father’s death, compounded by her search for real accountability, had a significant impact upon Erica.

Her experiences of grief, trauma, and the hard work of resistance—and the tolls they took—are a valid and necessary portion of the conversation about Black maternal health and well-being.

As the founder and director of Restoring Our Own Through Transformation (ROOTT), an Ohio-based Black woman-led reproductive justice organization focused on maternal and child health, I see the impacts of structural racism on the health and well-being of Black women and families every day. Even when we make strides in addressing health disparities that stem from scarcity of resources, education, and more, Black women’s risk of death and injury during or after pregnancy do not significantly change. They remain three to four times higher than our white counterparts. We cannot educate or pay our way out of the racist policies, institutions, and behaviors that have been created and upheld intentionally for the 400-year history of Black people in the United States. We cannot buy enough homes or enough access to the best prenatal care to change our outcomes without acknowledging and addressing racism as a health risk factor rather than Black race.

Simply living in this reality, within the ever-present reach of state violence, causes us harm and even death.

Black people know that racism and the stress it brings can kill. We wrote the proverbial book on this topic—with our bodies, activism, and scholarship. We know that stress is a major contributor to Black infant and maternal mortality. Dr. Amos Wilson—an Afrocentric scholar, psychologist, social caseworker, and probation officer—discussed this from several lenses, including the dynamics of power and racism in psychiatry, beginning in the late 1970s. University of Pennsylvania Professor Dorothy Roberts spoke specifically to the racism that compromises reproductive freedom in Killing the Black Body more than 20 years ago. Even in the late 19th century, activist Ida B. Wells talked about lynching, which often required law enforcement complicity and can arguably be compared to the current atmosphere of rampant state violence upon Black people. Black Panther Fred Hampton pushed the radical groups, the Puerto Rican Young Lords organization and the leftist Young Patriots (not to be mistaken by white nationalists with a similar name), to understand how capitalism—in U.S. politics, health care, and almost every other arena of public life—is intertwined with racism and shapes individual or community health.

We don’t need to get the memo that our white neighbors, journalists, and public health scholars are now just reading. But even with some health researchers and providers making connections between racism and police violence, far too many have been slow to acknowledge racism, stress, and law enforcement bias as key structures undermining Black health.

Many public health studies often lack a truly holistic and race-conscious analysis of how we got here, as if poor health occurs spontaneously in a vacuum. For example, it’s common to say there’s a lack of stable housing among Black Americans. But, in truth, that housing instability is part of a system of “redlining” that disallowed urban Black populations from purchasing homes, while facilitating homeownership among white, “low-risk” populations that lived inside “green-lined” areas.

Then, there’s how major health organizations, institutions of higher learning, and health education for everyone from high schoolers to patients talk about individual risk factors. It’s not enough to say that African Americans are at higher risk for conditions such as obesity, diabetes, and high blood pressure without explaining why. Such a frame misleads us to believe risk is biological, as if Black women and people are inherently broken and unhealthy rather than affected and sickened by oppression. And that race, not racism, is largely to blame.

But we are at a turning point, as recognition about the intersection of violence and health grows, however slowly. And it’s a Catch-22. While we need more research that looks at the total health and life experiences of Black women, others are commoditizing our struggle. Emerging research of non-Black scholars acknowledges stress and racism’s impact over the life course and the “weathering” or breakdown of our bodies. Within this emerging research is something very old: a system that establishes non-Black voices as more valid than our own. Those of us who are Black women and men are shaking our heads as we read these “revelations” or utilize them as citations because they only validate what we inherently know.

These theories are now echoed in what the medical and public health fields term as epigenetics, a much debated term positing that genetic changes or changes in how genes express themselves—some due to stress, environment, or other factors—can be passed on to future generations. Before this terminology was developed, some thinkers called it “cell remembrance.” For example, today, a disproportionate number of Black people being killed or sexually abused by the hands of law enforcement, while historically we have been terrorized by the Ku Klux Klan, which also connects to the infamous slave patrols that were precursors of modern law enforcement. All of which speaks to our intergenerational experience of abuse and trauma—and high levels of stress and ill health.

I believe that our bodies remember the mental, emotional, and physiological impact of the stress due to racism experienced now and in the past. It is a story we carry, the same story that Erica Garner carried after her father was killed by the hands of an officer charged to serve and protect.

Diagnoses like those of Erica Garner tell stories of individual health risk factors. But diagnoses themselves don’t conceptualize the root cause of disease or death. Nor do they explain the complex reasons why we are mourning the loss of another young mother who should be home, enjoying her newborn and family. The diagnosis is simply the Band-Aid covering a festering wound. The only way to get to the source is to tear off the bandage, expose racism’s wound to air, and clear the infection that has already become systemic.

The author would like to acknowledge the contributions of D.L. Wingard, MPA, to this article.