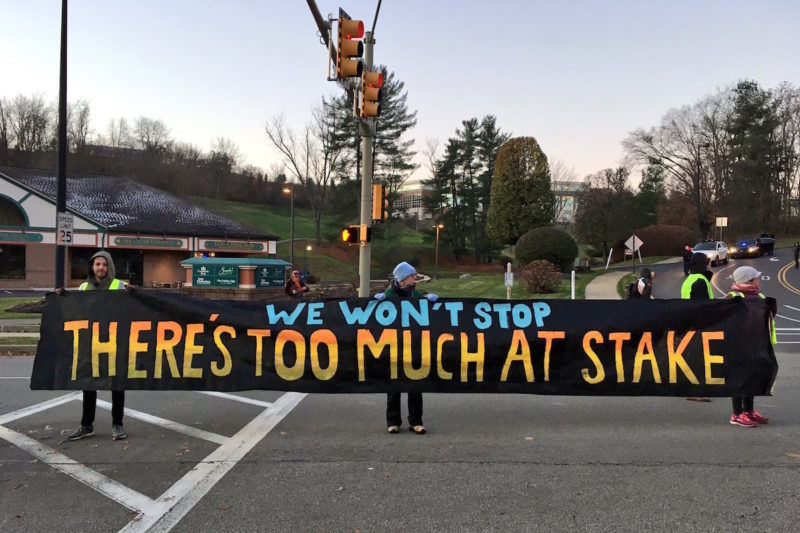 Many of those who gathered are part of the Stop ETP (Energy Transfer Partners) coalition and were in attendance at the three-day #PeopleVsOilGas Summit, which ended that day. Rising Tide North America

A group of approximately 75 frontline and grassroots organizers gathered on Monday at the Southpointe office park in Cecil Township, Pennsylvania, to confront the resource extraction industry. As they marched through the area, they targeted and broke homemade signs at the offices of MarkWest Energy Partners, EQT Corporation, Range Resources, Appalachian Midstream Partners, Rice Energy, and Consol Energy.

“We are sending a strong message to Consol—and to any other corporation that wants to destroy the resources within our area—that we will not stand down when our constitutionally protected rights to clean water and clean air are threatened, and that we will continue to fight for these same rights no matter what they throw our way because the future of our community depends on us,” said Sarah Martik, a community organizer with the Center for Coalfield Justice, in a press statement about the rally.

Many of those who gathered are part of the Stop ETP (Energy Transfer Partners) coalition and attended the three-day #PeopleVsOilGas Summit, which ended that day. Held in Pittsburgh, the summit was one of the largest gatherings of those fighting resource extraction on Turtle Island (the commonly used indigenous term for what is known as North America). The coalition states on its site, “We are building a movement to #StopETP and protect our communities. Everywhere ETP shows up, we will be there to say NO.”

Energy Transfer Partners is the same company behind the Dakota Access pipeline and has one of the worst safety records in the industry, as well as a lengthy rap sheet of human rights abuses.

Lori Glover, of Alpine, Texas, has stood in opposition of Energy Transfer Partners’ Trans-Pecos pipeline. She said that ETP are “climate criminals” and that indigenous people’s “way and story is the right way for returning us to the balance we have to have in order to live together.” Native people are the caretakers of the land with ceremonies that honor the earth and the beings on it; as such we are inextricably tied to nature.

Earlier that day, six water protectors erected a tripod-shaped blockade to disrupt the morning commute to the office park. In a press statement, blockade participant Veronica Coptis of Rising Tide said, “On [a] daily basis I get delayed due to increased truck traffic and on several occasions have almost been run off the road and these energy companies operate in our communities with no accountability. These executives can no longer make the decision to sacrifice our communities for private profit without consequences.”

Two people—Patrick James Young and Ashley Funk—were arrested and charged with disorderly conduct and obstruction of highways. They were later released on $5,000 bail each and have a preliminary hearing on December 21.

November 20 marks the one-year anniversary of the brutal assault on the primarily indigenous water protectors at Standing Rock. Law enforcement shot people with rubber bullets and concussion grenades while also deploying tear gas and water cannons in subzero temperatures. Many water protectors, such as Mariah Bruce of the United Houma Nation, who used a pseudonym for safety concerns, are still suffering from the abuses of that night. Bruce was shot by law enforcement in her vaginal area with an unidentified object. Since that night she has suffered from chronic pain, bleeding, post-traumatic stress disorder, and struggles with walking.

United States-recognized tribal lands compromise a quarter of the nation’s on-shore oil and gas reserves and one-third of the western world’s low-sulfur coal, but only account for less than 5 percent of the United States’ energy production. Under the Trump administration and anti-indigenous policy, such as HJ Resolution 44, there is an imminent threat of further environmental racism and degradation that indigenous communities will suffer heavily from.

On the same day as the march and blockade, the Nebraska Public Service Commission issued TransCanada permits for an alternative route for the Keystone XL pipeline. Indigenous communities and farmers in the path of Keystone XL have stood in opposition since it was first proposed and denied in 2015 under the Obama administration. Phase one of the pipeline recently spilled an estimated 210,000 gallons of tar sands oil. This oil causes three times the carbon emissions as standard crude oil and is notoriously difficult to cleanup, as it sinks in the water rather than floating like crude does. It’s highly corrosive and acidic resulting in higher likelihood of spills and requires more energy and water to produce. Four gallons of water is used for every one gallon of oil that is produced, leaving behind toxic tailing ponds so large that they can be seen from space.

The danger of these lines was highlighted that same day when a high pressure gas line owned by Consumer Energy, a subsidiary of CMS Energy, exploded and burned in Orion Township, Michigan, forcing evacuations.

Water protectors’ work isn’t complete. There are currently numerous resistance camps across Turtle Island, some of whom are preparing for the long battle against TransCanada’s Keystone XL pipeline, as well as divestment campaigns and local organizations fighting lesser known, but still destructive pipeline and mining projects. Under the current administration we haven’t seen the last of these acts of resistance. They may have only just begun.