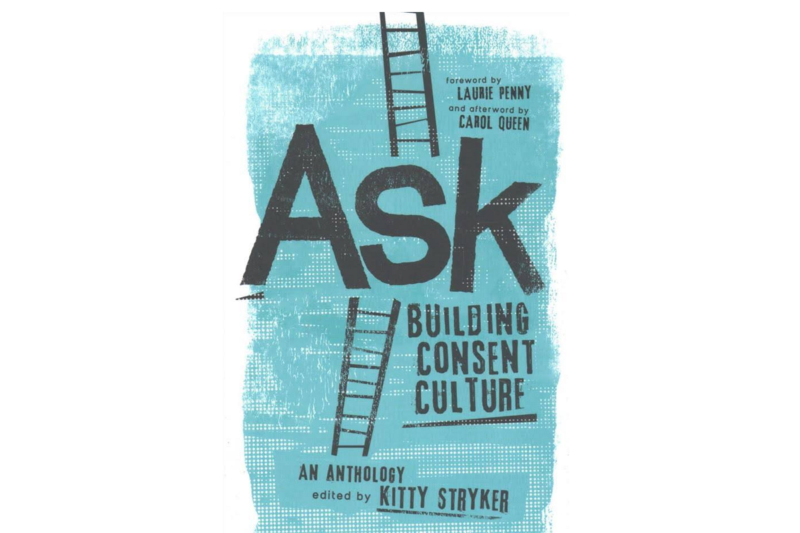 This collection explores what consent actually means and how it can be both fostered and derailed. Thorntree Press

As the current political moment has made abundantly clear, we’ll have to travel a long, twisty highway to move our society from the sexist paradigm known as rape culture to consent culture, a model in which respect for bodily autonomy and open, clear communication in romantic, platonic, workplace, or other interactions is prized.

Kitty Stryker’s Ask: Building Consent Culture anthology of 22 essays (Thorntree Press) looks at consent in numerous contexts: the bedroom, school, jail, workplace, home, hospital, and community. Its unique contribution, as noted in the foreword by British journalist and activist Laurie Penny, is in making “the essential links between consent at the individual and sexual level and consent at the level of law, society, and governance.”

The latter, of course, is far thornier than the former and while we can all probably agree that no one should be touched, fondled, or forced to engage in sexual contact against their will, the issues become even more complicated when consent moves into other spheres.

As Penny notes, “Sex is where it starts, but when is anything ever just about sex? The overriding of consent has become not just a social norm but a mode of governance. We have a president who has groped and bullied his way to power, overriding consent of the electorate just as he ignored the consent of the women he boasted of ‘grabbing by the pussy.’ We have a power elite perfectly happy to let him treat the voting public in the same way.”

That said, the collection is quirky and in no way comprehensive. Essays on white privilege, medical abuse, and the familial abuse of young transpeople–situations that impinge on a person’s ability to give meaningful consent—are touched upon, but don’t get the in-depth deconstruction they merit. Nevertheless, Ask makes a significant dent in covering subjects often ignored in conversations or debates about what consent actually means and how it can be both fostered and derailed.

Take mental illness. JoEllen Notte’s “Sex and Love When You Hate Yourself and Don’t Have Your Shit Together” is an honest appraisal of the psychological repercussions of social messaging that presents people with mental illnesses as incompetent and unworthy of love. Those who have a partner are posited as “lucky” to have found a saintly soul who is willing to put up with their ups, downs, delusions, or neediness. The result, she writes, is that many mentally ill people “surrender their right to true, enthusiastic, genuine, fully-embodied consent” out of desperation, fear, or outright gratitude that their mate hasn’t bolted.

Her sobering conclusion can be read as a trenchant reminder of the humanity at the core of every living being. “Going with the flow,” she explains, “is not consent. Trying to be unobtrusive is not consent. Being afraid to bother anyone with your problems is not consent. Not wanting to cause drama is not consent.”

“If we want to say ‘yes means yes,’ and make it mean more than ‘no means no,’ we need to go beyond the words to the lives that are shaping them,” she continues. “Someone who feels indebted to their partner, lucky to have them, in danger of losing them, is not delivering the same yes they would to an equal .… Someone who feels … they need to repress, hide, or stifle themselves lest they be cast out for being dramatic, may not say yes for the same reasons they would were they living out loud.”

Her advice is matter-of-fact, if difficult in practice: In her words, anyone involved with a mentally ill person needs to “decouple people from their illness—your partner and their illness are not one; they are more like an ongoing wrestling match.” How one does this is never explained, making the notion of consent in this arena troublingly vague.

Zev Ubu Hoffman’s “Sleeping with Fishes: A Skinny Dip into Sex Parties” is much more specific and moves into a social scene in which flirting is expected and sexual exploration is likely. Contrary to popular mythology, he writes, sex parties are not “anything goes” but are typically governed by a roster of behavioral limitations. Among them: Don’t get drunk, take photos, or use a cell phone; gossip about what was seen, heard, or experienced; and do not cruise aggressively. Although each party is different, he notes that rules—sometimes called a code of conduct or charter—are typically posted.

Should a boundary be inadvertently crossed, he adds, how it is dealt with is of paramount importance. “Don’t try to pretend that it didn’t happen or try to shift the blame onto [the accuser],” he cautions. “Give them the power to choose how to deal with it. A rap sheet of your mistakes is worth less than the recourse you pursued to take ownership of those mistakes .… It is about how you manage being told that you fucked up that matters. Apologize, ask what you can do to help others feel safe, and then do it.”

As a model of restorative justice, this is spot on, but I wish the collection included a deeper, more sustained look at how these ideas can be used to replace the punitive lock-’em-up-and-throw-away-the-key model of criminal justice that currently holds sway in the United States.

How can we ensure consent if folks feel too constrained or are unable to articulate their desires, reject unwanted advances, or deter harm? Some would suggest pursuing legal means—criminalizing those who refuse to secure clear-cut consent in every arena—but this, too, can be fraught. As AV Flox’s “The Legal Framework of Consent is Worthless” reports, “because the legal framework necessitates punishment for ‘justice’ to be served, it fails in actually creating a system for survivors to be supported, for harm to be addressed, for community intervention to prevent further harm, and for rehabilitation to occur for those who have harmed …. The well-being of people in our lives is not a legal matter, but an ethical one.”

This, of course, is true. At the same time, the claim that legal remedies are worthless seems exaggerated. Many rape survivors have attested to the trauma of having to repeatedly relive an assault during questioning by law enforcement or at a subsequent trial, and we have countless examples of a victim’s integrity being impugned as her sexual history is dissected on the stand.

Still, it seems like a giant leap to assume that this is how it has to be. Jail may, in fact, never result in the cultural shift that is necessary to stop rape or sexual assault and there are certainly racial and class disparities in sentencing—remember Brock Turner, the affluent, white Stanford University athlete who was caught having sex with an unconscious woman near a 2015 frat party and served just three months of a six-month sentence—but I’m not convinced that the legal system has no role to play, even if we discount incarceration as a desirable outcome.  Can’t the law be a tool that defines what is, and is not, acceptable, at least in terms of overt acts of physical force or harm?

Without a doubt, this issue deserves an anthology of its own. What’s more, parsing how best to handle offenders—a topic that Ask for the most part sidesteps—is also long overdue.

To its credit, however, the anthology analyzes what consent would look like in specific situations. Virgie Tovar’s “Fatphobia and Consent: How Social Stigma Mitigates Fat Women’s Autonomy” recalls being her photographed by a group of guffawing teenagers while on the subway. The teens, she writes, were apparently amused by her girth. “Just my body existing was funny to them,” she writes. “It has since made me hypervigilant while on the train. Now I consciously avoid two sets of commuter hours, attempting to weave around the 9 to 5 set who are heading to and from work, as well as the high school students who get out of school at 3 p.m.” Worse, this was not Tovar’s first or only brush with insulting strangers. Her advice: Recognize fatphobia and fat-shaming as bigotry, and stop treating the bodies of others as commodities for someone else’s entertainment. And, needless to say, don’t take cell phone photos of people you don’t know without first asking their permission.

Kate Fractal’s “Games, Role-Playing, and Consent” documents the norms governing theater-style, live-action, role-playing games (LARP), a subject I knew absolutely nothing about before reading this chapter. I found it fascinating. Fractal defines LARP as “an extended improv theater sketch with no audience but the players.” Participants are given written character and plot descriptions and, before each game begins, they meet to discuss issues that might come up in the scenario being enacted. “Traditionally,” Fractal writes, “before the game starts, organizers will have a round of introductions where everyone says who they are playing. Increasingly, I’ve seen organizers ask people to include in their introduction how comfortable they are with casual touch.” In one game, she continues, a woman playing a cat indicated that she was fine with petting, as long as her chest was untouched. Similarly, a man advised his cohort not to hug him unless they were friends in real life.

It seems so easy, so sane, that I couldn’t help but wonder if it is possible to transfer this type of communication to our everyday interactions.

But perhaps I want too much. Ask will undoubtedly be eye-opening for readers who’ve never given much thought to what a culture that truly respects human rights and bodily integrity would look like. It’s a good start, and as essay after essay treks across the prickly terrain of sexual and political consent, it reminds us that if individuals can learn to communicate, respect one another, get consent before engaging in physical acts, and respect boundaries if things change midstream, we may eventually be able to reach out more broadly to build the broad consent culture we need and deserve.