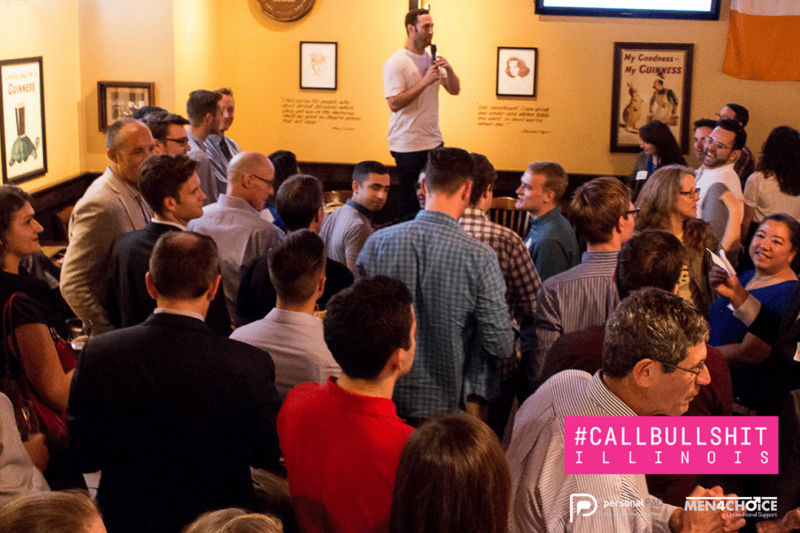 Oren Jacobson, co-founder of Men4Choice, speaking at the launch party for the #CallBullshit campaign. Oren spoke about Men4Choice's mission and vision and how men could get involved with the campaign by volunteering to knock on doors and host house parties. Men4Choice

People across the country are banding together to fight against anti-choice legislation, and Illinoisians are no exception. As Gov. Bruce Rauner (R) is set to decide the fate of a bill that would expand abortion coverage to Medicaid users and state employees, his male constituents are helping sound the alarm about his apparent abandonment of pro-choice promises.

Men4Choice, a concerned group of pro-choice allies, and the Illinois-based Personal PAC have launched a regional campaign, aptly titled #CallBullshit, to engage men on reproductive rights issues. As the campaign’s website says, “Men don’t have to put up with this bullshit. Why should women?”

In addition to putting pressure on Gov. Rauner to sign HB 40, the campaign aims to get men actively involved in a variety of abortion-related concerns, including a judge’s decision to halt an Illinois abortion notification law and the dearth of clinics in the middle of the country.

Rewire spoke with Blake Kelley, a Men4Choice board member, about the campaign, how men can be better allies and activists, and more.

Rewire: Reproductive rights have long been under attack, both nationally and in Illinois, where the #CallBullshit campaign is focused. Was there a specific incident that led Men4Choice and Personal PAC to galvanize and launch this campaign?

Blake Kelley: It’s no secret that historically, men haven’t been there to help women in the fight for their bodily autonomy. That hasn’t changed in the age of social media activism. It seemed whenever there was an attack on reproductive rights, women were the only ones talking about it, despite the fact that 75 percent of men in Illinois say they’re pro-choice. #CallBullshit is meant to specifically target these men, to encourage them to get educated and use their privilege to #CallBullshit on anti-choice policies.

Rewire: Why it is important for men to be involved in reproductive rights activism? And what role should they play as they get involved in this work (to avoid mansplaining an issue women have been working on for centuries)?

BK: Men need to get involved because bodily autonomy is a human right. When a man chooses to be silent on reproductive rights, he is choosing complacency with inequity. Silence is being comfortable with the privilege of not having to be concerned about the government regulating their bodies or the health risks of pregnancy.

Men need to understand foremost that their role in this fight is to be the support. This starts by listening; cis men [men who were assigned male at birth] will never have the same experiences women have when it comes to reproductive rights. But men can use their privilege to maximize women’s experiences and elevate their voices.

Rewire: What do you suggest to those men who are new to this space and want to create change under an aggressively anti-woman regime without perpetuating that same sexist, misogynistic ideology?

BK: Listen, get educated, and show up. Men can’t just show up one day and think they have the answers. We need to realize that we are new to this fight and there’s work we need to do: Educate ourselves, do our homework, and show up to support. Men can be supportive of women leaders and women-led organizations in this movement by showing up to knock on doors, being an abortion clinic escort, donating, sharing women’s voices on social media, and engaging with their male friends on why it’s important to be actively pro-choice. This also means calling out their buddies when they make a comment that is sexist or misogynistic.

Finally, chances are, men are going to make mistakes as they get involved. It’s going to happen and men need to learn to acknowledge mistakes, listen to the women who lead this movement, and learn to be better allies.

Rewire: What has the community’s response been to the campaign? Are men proactively and enthusiastically participating, or do you find it difficult to rally men on the issue?

BK: We’ve been blown away by the support. Men and women from all walks of life, including a lot of people we weren’t expecting, have come out to join the effort. We were excited to see roughly 100 people attend our #CallBullshit campaign launch in August. We’ve had over 12,000 one-on-one conversations with voters about reproductive rights. We’ve seen millions of impressions on social media and we’re just getting started.

Rewire: The campaign website lists several ways for men to #CallBullshit, such as by hosting parties and signing petitions. Are there specific actions that seem to engage men more than others? Why do you think this is?

BK: We all have different strengths. Some men are more comfortable talking about reproductive rights with their pro-choice buddies and some are comfortable talking about it with strangers when they go door to door. I think what’s important is creating multiple avenues to get men involved, to allow people to engage the way they think they can utilize their strengths. Once they get involved, people usually branch out and grow as activists.

Rewire: In your experience—with the #CallBullshit campaign or otherwise—what are the best ways to engage male allies in fighting for abortion access?

BK: In my experience, men aren’t engaging because they aren’t knowledgeable about the recent attacks on reproductive rights, and they don’t understand how to talk about the issue as a partner and an ally.

When I tell guys about the current trigger law in Illinois—which could make abortion and contraceptives illegal [and which HB 40 would overturn]—they almost always want to know more and how they can help. There are a lot of progressive, pro-choice men out there who don’t know what’s going on and don’t know the right way to engage as allies. Unfortunately, it’s not commonplace for a group of men to talk about abortion. But when one guy brings it up, it allows them to ask the questions they might have otherwise been uncomfortable asking before. We are here to instigate those conversations and teach men how to engage in those conversations the right way.

Rewire: Are there any plans to expand the campaign, perhaps regionally or nationally?

BK: Men4Choice is currently an Illinois-focused organization, but obviously, we’re not the only state where choice is in jeopardy or under attack. Men4Choice is just one small niche part of this giant pro-choice movement that we are seeing across the country. We know there are men in other states that care about these issues and would love to get them engaged, too.

Rewire: You have an event, called “Ma’am Up,” on Thursday. Tell us all about it!

BK: As someone who is queer, I’m really excited about our “Ma’am Up” event, focused on getting the LGBTQ community engaged. The event is in the heart [of] Boystown, the first officially recognized gay neighborhood in the United States. We will have speakers from LGBTQ-focused organizations there to show community support. The reality is LGBTQ rights and reproductive rights are not exclusive. This is a great opportunity to talk about the intersection of those identities, how it affects different people, and how we can work to bring both communities together.

This interview was edited lightly.