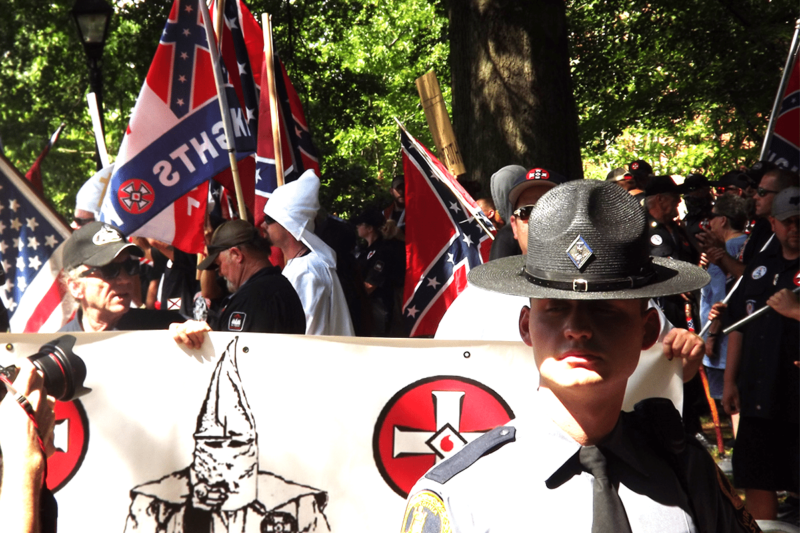 UPDATE, August 16, 10:32 a.m.: Members of the Oath Keepers say the group did not attend this weekend’s rally.

The tension is growing in Charlottesville, Virginia, as the small city prepares for the “Unite the Right: March on Charlottesville” gathering of so-called alt-right and white supremacist groups. City workers in orange vests on Thursday morning swept up cigarette butts around clusters of journalists in Emancipation Park, formerly known as Lee Park and the nexus of white nationalists’ obsession with Charlottesville.

“They bringing in the bomb-sniffing dogs tomorrow,” a city worker said as he cleaned under a bench.

At the University of Virginia’s Children’s Hospital, staff said they were preparing for a potential influx of patients beyond what the hospital’s emergency room can handle, said Alexander Prevost, spokesperson for the hospital. During last month’s Ku Klux Klan rally in support of the statue of General Robert E. Lee, which stands in the center of the former Lee Park, most of one level of the hospital was turned into an (unused) emergency treatment and triage center.

Citizens in the days before the Klan rally gathered at the public library for instructions on how to avoid and treat injuries caused by tear gas. On a stroll from the library to the post office, one passes newspaper boxes filled with the local weekly paper with the face of white supremacist Jason Kessler on the front page.

Nearly every conversation on the streets of Charlottesville today begins with talk of “the rally,” which all but a few dozen local residents vehemently oppose, regardless of their party affiliation. Charlottesville is preparing for the descent of a whirlwind of far-right and left-wing political organizations whose names would have been unrecognizable to most Americans not long ago.

The event was announced by Kessler, the criminally convicted leader of a small but vocal group of local white supremacists called Unity and Security for America. Kessler’s events typically draw between a dozen and thirty supporters from within the area. But as the Charlottesville debate over the Lee statue ballooned into a statewide election issue and then spilled into international media, Kessler has found himself hosting other groups and leaders from across the white nationalist spectrum.

Richard Spencer will be one of the major speakers at the rally. Spencer coined the term “alt-right,” involuntarily gave the world the “punch a Nazi” internet meme, and leads a group called the National Policy Institute. Spencer attended the University of Virginia and has appeared in Charlottesville before. He has about 150 dedicated followers who may follow him to Charlottesville this weekend.

Members of the KKK may return, along with members of other southern nationalist groups such as the League of the South.

White nationalists, including National Socialists and skinheads will be in attendance, though not all skinheads are necessarily racist (the skinhead subculture originated during the 1960s and 1970s in the multicultural union of Jamaican immigrants and white English dock workers).

The Proud Boys, who appear to be Trump supporters playing Fight Club, may return to Charlottesville in larger numbers after a trip this summer to hang out with Kessler. As an organization, the Proud Boys say they do not officially endorse racism. The group’s previous visit to Charlottesville was punctuated by disharmony and loud, public arguments over white supremacy between some of its members and Jason Kessler.

Somewhere in the middle are the Oath Keepers and members of various militias that tend to be pro-Trump but say they are opposed to white supremacism and fascism. The Commander of the Pennsylvania Light Foot has stated that he intends to bring his armed followers to the rally in order to protect the First Amendment rights of white nationalists while disagreeing with the politics behind the rally.

Most members of all of these far-right groups will come in from well outside the area. Groups like the KKK, militias, and the National Policy Institute do not have a meaningful presence in or around Charlottesville.

The largest subset of protesters countering the white supremacist rally is likely to be residents of Charlottesville, a liberal city that typically votes overwhelmingly for Democratic candidates. Most belong to no formal political group. Ordinary citizens came in droves to the KKK rally: high school students, grandparents, business owners, college professors.

The preeminent local organization opposing Kessler and the rest of the white nationalists is Standing Up for Racial Justice (SURJ). SURJ is well organized, with local numbers reaching into the hundreds. They have offered training to members and non-members in how to survive a protest, according to the group’s Facebook page. SURJ has additional groups around the United States and many of them are likely to pour into Charlottesville by the hundreds or thousands.

Black Lives Matter is a significant political force in Charlottesville. Some of its local members have made efforts to engage in constructive dialogue with opponents at past protests, alongside the more typical chanting and noise making of other groups. Black Lives Matter has substantial support from local white activists.

A local group of clergy from many denominations have asked for 1,000 clergy from around the country to join them in peaceful opposition to the white nationalist rally. Whether they will draw 1,000 remains to be seen, but religious attire could be a common sight at the rally.

Dozens of anarchists from Washington, D.C., came to Charlottesville for the KKK rally. Far more from even further away are likely to arrive for this larger rally. At the KKK rally, anarchists tended to direct protests toward police.

Members of Antifa, an anti-fascist group, are militant heroes to some and a scourge to others who are expected to arrive in Charlottesville, introducing an element of chaos and danger. Antifa has a history of seeking out violent confrontations with their opponents. Its members have repeatedly smashed windows and set fires at protests. It isn’t clear how picky they are about which windows to smash. Antifa membership often overlaps with other groups.

Most cryptically, a black bloc could arrive. A black bloc is not an organization so much as an approach to protesting—a group of people wearing all black with black masks in order to make it difficult to determine one person from the other in the event of illegal behavior by a few members. A black bloc at the inauguration of President Trump smashed windows, threw rocks, and set at least one vehicle on fire. The wearing of masks in public is illegal in Charlottesville unless for one of several proscribed reasons. Members of a black bloc in Charlottesville risk arrest before they even get started.

That is the worst-case scenario in the minds of many Charlottesville residents and business owners. Amid thousands of angry protesters fighting with white supremacists, they fear, a handful of Antifa or black-clad anarchists could begin smashing windows and lighting cars on fire and turn this peaceful city into something resembling a war zone.

In preparation for that, an array of police agencies are descending on the city with vehicles and equipment. The Charlottesville Police Department (CPD) handle ordinary law enforcement duties within the city. Most of CPD’s officers are trained in deescalation of conflict as an alternative to arrest and some are experienced in dealing with similar rallies in Charlottesville that have ended without mass arrests or the use of riot gear.

They will be joined by more than 100 Virginia State Police Officers. It was the State Police that brought riot gear and deployed tear gas at the KKK rally.

Sheriff’s deputies will participate in the law enforcement plan, but are typically assigned to duty immediately outside of the courts within a few blocks of the downtown area, where protests will take place.

Police officers from Albemarle County, which is the jurisdiction surrounding Charlottesville, are accustomed to working closely with CPD. Some will be answering routine calls within the city on Saturday, which is highly unusual.

The State Police will also have a SWAT team on hand. At the KKK rally, the tank-like SWAT vehicles were hidden in an enclosed government parking lot in case they were needed. SWAT members wore green, para-military uniforms and carried assault rifles. The vehicles were kept out of sight until their departure.

Many downtown businesses will be closed on what would normally be a busy day at the height of the tourism season. Some will board up their windows. If past white nationalist events are prologue, members of white supremacist groups are unlikely to be served by or allowed to enter any of the downtown restaurants. Signs declaring a side have become one of the most visible forms of downtown preparation for the rally. As some signs popping up outside popular restaurants downtown read, “If equality and diversity aren’t for you, then neither are we.”