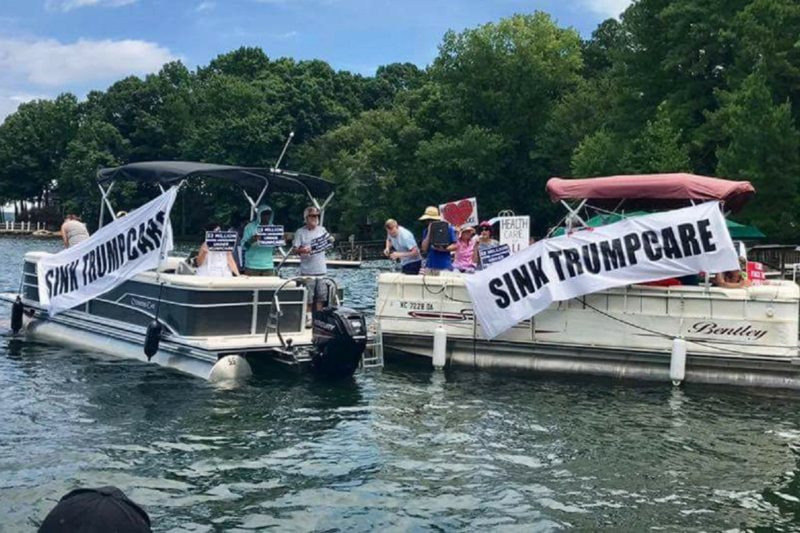 Why? Because for many of them, their senator holds the key between life and death. This week, the Senate is poised to vote on overturning the Affordable Care Act (ACA). According to many experts, it may come down to the wire, with as many as ten GOP senators opposing the plan and others remaining undecided. Sen. Tillis’ vote could help pass Trumpcare.

“My daughter will die without the Affordable Care Act,” said Sheila Hamden, a Charlotte resident and captain of one of the boats. Hamden’s daughter, who has a chronic illness that her family prefers not to disclose, floated in the warm lake water while her mother shouted through a megaphone at Tillis’ house.

“Senator Tillis, don’t let my daughter die,” Hamden called across the water toward Tillis’ 4,000-square-foot home in one of Charlotte’s ritziest suburbs.

Tillis was scheduled to attend a meeting nearby and was not home during the action, which I organized through my employer Progress NC Action (a 501(c)(4) political education organization) along with the political resistance group Indivisible, MoveOn, and the North Carolina NAACP, among others. However, his neighbors crowded nearby docks and gaped at the gathering.

Last week, co-workers and I had painted the banners on strips of muslin cotton, guided by an overhead projector. On the day of the protest, I tiptoed along the boat’s edges, tying the signs while my boat’s passengers—each of whom claimed to have a pre-existing condition or other personal reason for opposing Trumpcare—chided me to stay safe.

Donna Marie Woodson, a Charlotte resident and cancer survivor, said, “Since Tillis refuses to hold a town hall meeting [in person], we decided to go to him—right to his own backyard.”

Tillis was elected to the U.S. Senate in 2014 after serving as the speaker of the North Carolina House of Representatives and hasn’t held an in-person town hall since going to Washington. He has previously said he will not meet with groups of constituents.

“It has become apparent that some individuals, who are not really interested in meaningful dialogue, attend town halls just to create disruptions and media spectacles. This is particularly unfortunate because it leads to a scenario in which only the loudest voices in the room can be heard and very little meaningful discussion can actually occur,” Tillis wrote in a letter earlier this year.

Tillis did recently hold a virtual town hall, with constituents phoning in and joining online. Those gathered on the boats Friday said that’s not enough. They want him to see them and hear from them face to face.

But there was no sign that Tillis reached out to those he represents to seek comment about the impending vote. That’s why Connie Lazenby of Alamance County drove an hour and a half, covered herself in sunscreen, and rode a pontoon boat to Tillis’ $1.3 million lake house.

“Last year, even on Medicaid, I was forced to forgo medication in order to afford basic necessities like food, rent, and utilities—and Trumpcare will only make things worse,” said Lazenby. “I have no wish to die because politicians are intent on dismantling the Affordable Care Act just to give rich people a tax cut.”

According to a Congressional Budget Office report, 22 million people would lose health care under the proposed repeal of the ACA. North Carolina residents could be hit hard, with more than 1.3 million likely losing insurance and the state receiving $6 billion less from the federal government to fund its Medicaid program.

A group of legal observers joined the flotilla to ensure the group was able to express its First Amendment rights without harassment. In the town of Lake Norman, it is legal to use sound amplification and gather on the water, as long as boats do not dock at private docks or beaches.

Despite that, Tillis’ office claimed in a statement the senator’s privacy had been violated.

“In this kind of political environment, it’s disappointing to see the media enable partisan political groups that cross the line of common decency by harassing a person’s family and neighbors,” said Tillis spokesperson Daniel Keylin. “Nothing about this political stunt and the media’s coverage of it is productive.”

“Tillis’ constituents have been begging him to meet, and he refused,” Brenner said. “If he’s going to vote to take away their health care, the least he can do is listen.”

Earlier in the year, Tillis said he needed some clarifications about how the proposed House bill would deal with pre-existing conditions, a major sticking point for many Americans who might lose coverage simply because they have a previous or ongoing health condition. But Tillis has recently said that he’d be “supportive of anything” to get the Senate version to the 50 votes needed to pass.

There’s been no word on what helped Tillis resolve his previous misgivings, but the coalition that assembled the flotilla believes if he’d listen to them there’d be no way he’d vote to repeal the ACA.

“What we are dealing with here is incredible cruelty,” said Patrick O’Neill, a writer and longtime activist whose daughter has Down syndrome. “For Sen. Tillis to support this monstrous health care bill without holding a single town hall meeting with his constituents shows he couldn’t care less for families like mine.”

Both North Carolina senators—Thom Tillis and Richard Burr—say they will vote to repeal and replace the Affordable Care Act. But many of their constituents say they aren’t seeing the whole picture and are valuing businesses over people.

From their aquatic perches, O’Neill and the other protesters chanted, “Thom Tillis, vote no. We’re going to hold you to it,” and “Who deserves health care? We deserve health care!”

After about an hour of protest under the midday July sun, our group adjourned to a nearby boat landing.

Our next steps are clear: We must be ceaseless in our pursuit of actual representation from Tillis and our other representatives in Washington. We will continue to demand town halls, and if we are not answered, we will continue to seek out Tillis wherever he may be—even if that means renting a kayak next time or camping out in front of his district offices.

“All political power comes from the people,” said Fran Schindler, a 78-year-old breast cancer survivor who traveled 200 miles across the state to join the flotilla. “And Tillis must remember that we gave him his power and he is here to represent us. I’ll go to his lake house, his office, his house in D.C. I’ll go anywhere if he would just listen to me.”