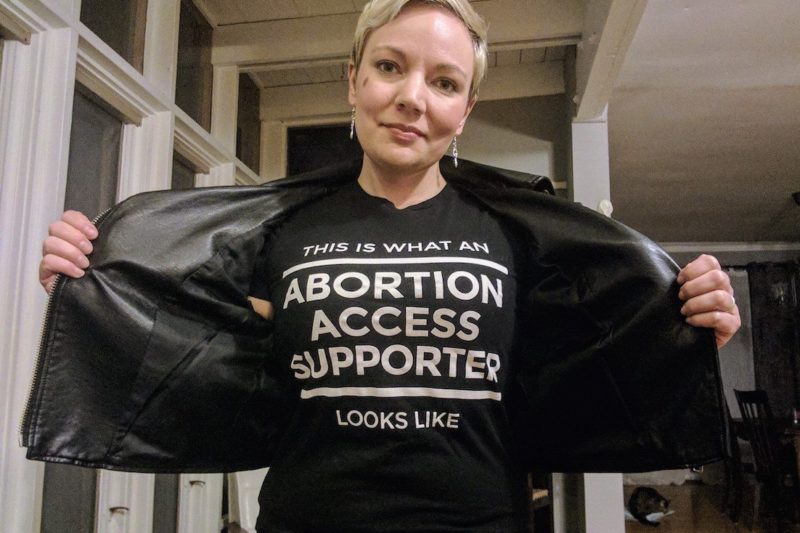 Anti-abortion laws like SB 145 might prevent even the best doctors in the world from taking action to save my life. And that’s not pro-life. Mallory McMaster

On June 27, 2016, I joined reproductive rights advocates around the country in celebrations after the U.S. Supreme Court released its groundbreaking Whole Woman’s Health v. Hellerstedt decision striking down anti-abortion provisions of a law designed to shut down clinics. After years of legislative setbacks in states all around the country, it seemed like abortion access supporters finally had our day.

But on June 27, 2017, exactly one year after the Whole Woman’s Health decision, I found myself standing in front of the Ohio state Senate Judiciary Committee, sharing my testimony about SB 145, a bill that seeks to ban the most common abortion procedure used for patients after 13 weeks. The bill was passed out of the committee minutes after I testified. The following day, the Ohio Senate moved to turn the bill into law, with a vote of 24 to 9. From there, the bill needs approval from the Ohio house and Republican Gov. John Kasich.

I’m currently seven months pregnant, but I made the trip (despite all the other things I could be doing) because I understand how vital the need for abortion access in Ohio is for people like me. If SB 145 takes effect, physicians would be banned from using a method of abortion that has been proven safe and effective through years of research and medical practice.

The truth is, the fight for abortion access today doesn’t feel much different from the months leading up to the Whole Woman’s Health decision. If anything, today’s battles feel even more desperate when combined with the air of uncertainty around the Supreme Court and its Roe v. Wade decision. Conservative states have passed staggering numbers of anti-abortion restrictions since the election last November. And my state, Ohio, seems to be leading that charge.

I testified telling my senators how my current pregnancy wouldn’t be possible if I hadn’t had an abortion several years before. At that time, I was trapped in a physically violent marriage. I had absolutely no intentions of starting a family with the person to whom I was married, so I continued to use the same oral birth control method I’d used successfully since high school. Somehow, I got pregnant anyway. By that point, I knew I needed to leave the marriage but I didn’t know how. I did know, however, if I continued the pregnancy, the child and I would never really be safe from the abuse I’d experienced for years.

Making the decision to have an abortion was easy for me. In fact, I often tell people it was the best decision I’ve ever made.

My life has changed quite a bit since I had my abortion. I found the courage and the resources to leave my abusive marriage. I got a degree that allowed me to pursue a career I love; I remarried; and we bought a beautiful home with plenty of room for our growing family. My husband and I didn’t make the decision to grow our family on a whim. We’re organized, methodical people and we try to evaluate the pros, cons, and outcomes of every choice we face.

One of the biggest factors in our decision-making process was our families’ complex medical histories. The list of diseases, conditions, and premature deaths in our family trees spilled over onto two pages. Before we decided to try to get pregnant, I met with a geneticist and a high-risk pregnancy specialist to gauge the likelihood of us having a healthy child. After expensive testing to determine if I had any genetic predisposition to some of the most common hereditary conditions, they gave us a green light but did stress the importance of the 20-week anatomy scan to screen for any issues.

After a few months of planning, testing, charting, and trying, my pregnancy test turned positive. We were elated!

While we were celebrating our good news in Cleveland, abortion opponents in the Ohio legislature were pulling all-nighters and working as fast as they could to pass some devastating new restrictions before their legislative session came to an end at the end of December. They were ultimately successful, passing bills banning abortion at six weeks and 20 weeks before heading home to spend the holidays with their families.

I became pregnant knowing that I had the option to terminate my pregnancy if necessary. These new restrictions felt like a personal, physical attack on my family.

I’d done everything “right.” I was financially secure. I was married. I had great health insurance. Prenatal vitamins. Dental exams. Yoga classes. Dog training. Not cleaning the litterbox. I stopped eating sushi. Everything society tells women they have to do if they want to be a good mother, I did. Yet still, somehow, it wasn’t enough. That legislation, a measly piece of paper, suddenly stood between me and my ability to make the best decisions about my pregnancy. I panicked.

I briefly considered having an abortion.

I was desperate to do everything possible to ensure my child’s well-being, even if it meant terminating the pregnancy. Ultimately, I came to the conclusion that I wasn’t going to let legislators who have never met me prevent me from becoming a parent on my terms. Instead I mapped out the closest abortion clinics in nearby states and saved a mental list of places that could help me if doctors in my own state suddenly could not. This was far from an ideal solution, given the fact that even though I lived less than two miles from one of the best abortion clinics in the country, I would still have to miss extra work, drive hundreds of miles, and stay in a lonely hotel to get the care I needed. I told myself I was “lucky” enough to have the financial and emotional support necessary to do that, but I didn’t feel very lucky.

A few days later, we learned that the governor blocked the six-week ban, but allowed the 20-week ban to move forward. I was still devastated, but at least I knew what my timeline was. I immediately called my high-risk OB-GYN and asked how early I could schedule my genetic testing and 20-week anatomy ultrasound. My hospital and insurance company wouldn’t allow me to complete the anatomy ultrasound before 19 weeks and I knew that Ohio law meant I wouldn’t have enough time. What if I wanted a second opinion? What if I needed some time to think? What if the fetus wasn’t cooperating and they couldn’t get a clear shot of the heart, lungs, and brain that day? They were sorry, but there was nothing they could do. The test just wasn’t as reliable before 19 weeks.

My only option was noninvasive prenatal genetic testing. A seemingly simple blood test that identifies fetal chromosomes and screens—it doesn’t diagnose, it just screens—for genetic problems. I could have the testing done as early as nine weeks. The catch? My insurance policy wouldn’t cover the $10,000 fee. They preferred that women wait for their 20-week anatomy scan. I tried to explain why I needed to know if something was wrong before then, but my insurance company representatives basically told me it wasn’t their problem.

We decided to do the testing—again, something I was unbelievably lucky to be able to afford, but something I shouldn’t have had to do in the first place. The results came back three weeks later with good news. We were having a boy, and the lab didn’t detect any chromosomal abnormalities. I breathed a small sigh of relief and started counting down the days until my anatomy ultrasound.

I was nervous walking into the hospital that morning. I tried to prepare by reading about conditions that are commonly diagnosed during these scans so I could maybe feel confident about making a very quick decision to terminate the pregnancy if they found something that could hinder my child’s well-being. Ideally, I would have planned to meet with specialists and genetic counselors before making a decision that monumental, but thanks to Ohio’s 20-week abortion ban, combined with a mandatory 24-hour waiting period after signing consent paperwork, I didn’t have time to consult doctors. If I needed to schedule an abortion, I would have to do so that day. I tried not to think about how I would feel afterwards. Would I spend the rest of my life second-guessing that quick decision? Who knows.

The scan turned out fine. My baby looked perfect, with a heart, two kidneys, two lungs, a spine, and two enormous feet. As I was driving home, I felt some of the tension and stress I’d had for the last five months start to leave my body, but it was quickly replaced by anger. This should have been the happiest time of my life! Instead of glowing and nesting and all of the things expectant parents do to prepare for babies, I’d spent half of my pregnancy worrying about the harm that could be caused by Ohio’s restrictive abortion laws.

About a month later, I found myself facing yet another circumstance where my health-care options could be limited by Ohio’s abortion restrictions. I felt funny one afternoon so I checked my blood pressure. It was 180/98. I called my doctor who told me to go to the hospital immediately. It was still dangerously high 30 minutes later while I was being strapped to fetal monitors, heart rate monitors, and having a bunch of blood drawn. After a couple of hours of rest and fluids, my blood pressure was low enough to go home, but I got a stern lecture from an OB about the dangers and warning signs of preeclampsia and gestational hypertension—conditions that happen quickly and can be fatal for pregnant women. I promised to stay hydrated and check my blood pressure every day at home.

While we were pulling out of the hospital parking garage to go home, I told my husband how scary that felt. He grabbed my hand and said, “This is one of the best hospitals in the country. They aren’t going to let anything happen to you.” I just smiled and squeezed his hand, but deep down, I knew that wasn’t entirely true: Politicians can keep me from getting the care I need. Anti-abortion laws like SB 145 might prevent even the best doctors in the world from taking action to save my life. And that’s not pro-life.