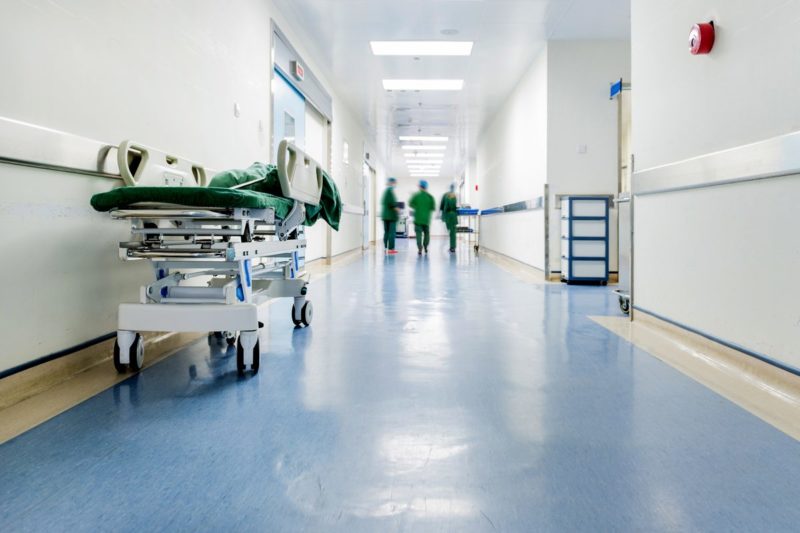 According to the employees challenging the hospitals, approximately 95,000 employees work for Catholic hospitals. As of Monday, those employees effectively got a pay cut and benefits slash from the Roberts Court. Shutterstock

The U.S. Supreme Court on Monday issued a decision that could have devastating effects for the tens of thousands of people employed by Catholic hospitals.

The decision came in the case of Advocate Health Care Network v. Stapleton and its two related cases that address the scope of the “church plan” exemption under the Employee Retirement Income Security Act of 1974 (ERISA), the federal law governing employee benefit programs like pensions and health insurance. Among the provisions set by ERISA are requirements that pension plans meet certain minimum funding requirements, and that plans do not discriminate in their benefits by doing such things as providing comprehensive health insurance coverage for men but not women.

Three federal agencies are charged with ensuring compliance with ERISA’s requirements: the Department of Labor, the Internal Revenue Service, and the Pension Benefit Guaranty Corporation. Those agencies have historically granted wide latitude when deciding which plans are or are not church plans, including those run by religiously affiliated employers.

The cases involved in Monday’s decision are part of a wave of litigation by employees of hospitals challenging those expansive agency determinations that church plans can extend well beyond religious institutions themselves. The employees claim because those plans were not established by a church, they do not meet ERISA’s definition of church plan. Thus, they say, those organizations should be subject to the statute’s employee protections. The hospitals counter that because they are religiously affiliated institutions, their plans qualify as those “maintained” by a church and therefore fall within the exemption.

The lower courts agreed with the employees. On Monday in a unanimous decision, the Roberts Court reversed those rulings and sided with religiously affiliated employers, deciding the hospitals did not have to comply with ERISA.

Justice Elena Kagan wrote the opinion for the Court, with Justice Sonia Sotomayor filing a concurring opinion. Justice Neil Gorsuch did not take part in the opinion.

ERISA is a complicated statute, and the arguments in Advocate Health Care Network involved a detailed, and very dry, examination of both the wording of the statute as well as Congress’ intent in passing it in 1974 and amending it nearly a decade later—which Sotomayor pointed out in her concurring opinion. At that time, many of the health-care plans and institutions at the center of the exemption fight did not exist. This means there is a lot of very dry and dense “legalese” to work through in both the statute and arguments surrounding it.

To that end, it is a good thing that Kagan, one of the clearest and plainly worded writers on the bench, wrote the opinion for the Court. The decision has devastating effects, and Kagan walks us through them directly in a short, 15-page opinion that bluntly rejects the employees’ arguments against extending church plan exemptions to benefit plans not established or maintained by a church. According to the Court, the fact that the hospitals are at least tangentially religiously affiliated and maintain benefit programs is enough to qualify for the exemption.

The impact of the decision means Catholic hospitals, which employs tens of thousands of low- to middle-income workers, can now generally avoid the employee protections ERISA provides, including a minimum pension fund. Those protections would also likely include the birth control benefit in the Affordable Care Act (ACA), which has been tied up in litigation in the federal courts for five years now. The executive order recently issued by President Donald Trump purports to exempt all employers from the requirement while Congress figures out a way to repeal the ACA altogether. But cases challenging inclusion of religiously affiliated employers in the ACA’s mandated no-cost birth control benefit are not yet resolved, so it is unclear what effect, if any, the federal courts will give to Trump’s order. With Monday’s ruling from the Court, however, the outcome of those cases could now be irrelevant for employees of Catholic hospitals under this expansive definition of church plan.

According to the employees challenging the hospitals, approximately 95,000 employees work for Catholic hospitals. As of Monday, those employees effectively got a pay cut and benefits slash from the Roberts Court.

“The Supreme Court has put the retirement of hundreds of thousands of Americans at risk,” said Richard B. Katskee, legal director of Americans United for Separation of Church and State in a statement provided to Rewire. “These hospitals now have the right to use their religious affiliation to pocket hundreds of millions of dollars that they promised to their employees as retirement funds and pensions.”