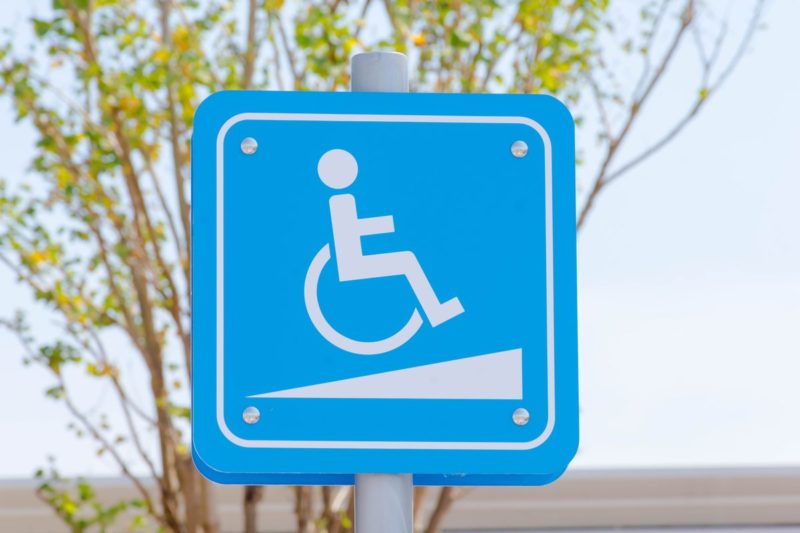 Never in my life as a disabled woman have I been so terrified of losing my civil rights as I am now. Shutterstock

On July 26, 1990, George H.W. Bush signed the Americans With Disabilities Act (ADA) into law, proclaiming, “Let the shameful wall of exclusion finally come tumbling down!” Although I was only 8 years old, I still remember its passage and the increased accessibility that followed.

The ADA has both literally and figuratively opened countless doors for people like me, by requiring entities that are open to the public—such as restaurants, movie theaters, hospitals, hotels, and museums—be fully accessible to people with disabilities. The ADA also requires employers, as well as public and private entities, to provide reasonable accommodations to people with disabilities and prohibits discrimination based on disability.

Of course, passage of the ADA did not make ramps and elevators magically appear; nor did it immediately halt discrimination against people with disabilities. Progress takes time, which, as a wheelchair user, I have witnessed firsthand. Indeed, for several years after the law’s passage, my parents or I would always have to call places in advance to make sure that they were wheelchair accessible. For years, the answer was “no.” But times have changed, and now I no longer feel I need to take these extra steps before leaving my home. Nearly 27 years after the passage of the ADA, I now expect that all businesses will be accessible. And that is liberating.

While we surely have much further to go, the ADA has unequivocally led to much greater inclusion and accessibility and far less discrimination. Now, however, Congress is currently considering imposing significant limitations to the ADA through the passage of the ADA Education and Reform Act of 2017 (HR 620), sponsored by Rep. Ted Poe (R-TX).

Currently, if a person with a disability encounters an accessibility barrier at a business, they have two options: They can file a complaint with the U.S. Department of Justice (DOJ), which will investigate and decide if a violation has occurred. DOJ may enter into mediation with the person and the business, which is a low-cost approach to resolve ADA violations fairly quickly. DOJ may also sue the business on the person’s behalf. Alternatively, people with disabilities may file a lawsuit in court, bypassing DOJ altogether. The cornerstone of current enforcement options is that the violation can often be resolved swiftly.

If the ADA Education and Reform Act is passed, however, a person with a disability would be required to give a written notice to a business owner who has barriers to access. The business owner would then have 60 days to even acknowledge that there is a problem—and then another 120 days to make substantial progress toward correcting the violation. In other words, people with disabilities would be forced to wait 180 days to enforce their civil rights.

The ADA Education and Reform Act is premised on trying to curb “drive-by” ADA lawsuits: that is, frivolous lawsuits brought by attorneys alleging ADA violations. Surely, serial litigators, attorneys who simply bring lawsuits to line their pockets, must be stopped. However, these bills are not the solution.

To be fair, I vehemently oppose frivolous ADA lawsuits, where people seek to use the ADA for their own monetary gain. I cherish this law and hate hearing that some misuse it. However, it’s important to note that they are not as prevalent as some believe. An analysis of ADA lawsuits in 2016 identified just 12 individuals and one organization that have filed more than 100 lawsuits each. But frivolous lawsuits are not an ADA issue; they are a state and court problem. Indeed, ethics rules bar attorneys from bringing frivolous lawsuits. Rather than go after people with disabilities, attention should be focused on stopping these few bad attorneys.

Notably, passage of the ADA and ADA Amendments Act involved the disability community and bipartisan lawmakers working together with the business community. These “notification bills,” however, do not. Rather, they are the result of business owners and their lobbyists.

The disability community is not interested in more lawsuits; we simply want accessibility. There is no such thing as the “ADA police.” Enforcement depends on people with disabilities who know their rights to challenge violations. Filing lawsuits is timely and expensive. Finding an attorney that is knowledgeable about the ADA is very challenging. I say this because I believe it is fairly safe to assume that there are far more ADA violations occurring than we will ever hear of. As a disabled woman, I encounter violations daily.

Nevertheless, there’s a prevailing belief that ADA regulations are overly technical and most alleged violations are “minor.” The regulations concerning accessible parking spots are frequently used to demonstrate how ADA regulations are too specific. What opponents don’t understand is that the width of parking spaces matter for people with disabilities who drive, such as myself. I drive a wheelchair–accessible van. If someone parks too close, I am literally stuck because no one besides me can drive my van. This has happened to me more times than I count, leaving me stranded outside for hours, until the person returns to their car.

Throughout the years, based on a belief that the ADA is being abused and has become a money-maker, Congress has introduced a number of “notification bills.” These bills are problematic and have been strongly opposed by the disability community.

It is also important to dispel the myth that ADA lawsuits can be profitable for plaintiffs; that is plain wrong. When the ADA was being drafted, as a compromise between the business community and the disability community, the disability community gave up the option to obtain damages for a business’s failure to comply with the law by allowing only injunctive relief—meaning the business owner has to change their behavior—and attorneys’ fees.

Settlements or court orders that involve money damages for accessibility violations are based on state laws in a handful of states, not the ADA. Therefore, adding a notice requirement before people with disabilities can enforce their rights will do nothing to prevent businesses from being subjected to money damages. Moreover, if the accessibility violations in question are truly minor, as the proponents of these bills claim, it would not be difficult for businesses to fix the problem and resolve the issue quickly, with minimal attorneys’ fees. Hence, the issue is not an ADA one.

In addition, it’s important to recognize that the ADA includes several provisions that protect businesses from unreasonable requirements. For example, the ADA does not require any action that would cause an “undue burden” or that is “not readily achievable,” which is defined as “easily accomplished and able to be carried out without much difficulty or expense.”

Adding a notification requirement won’t make serial lawsuits go away. Instead, it simply sends the message to business owners that they don’t have to worry about complying with the ADA until they receive a letter notifying them that they are discriminating against people with disabilities. In other words, instead of complying, they can just “wait and see” if they are caught.

The imposition of a months-long “waiting period,” during which a business may continue to violate the law and deny access to people with disabilities once it has received a notice that it is violating the ADA, is simply not reasonable.

In short, the premise of bills like the ADA Education and Reform Act is that businesses should not be responsible for knowing their obligations to comply with a law that has been in effect for nearly three decades, but people with disabilities should instead be responsible not only for knowing the accessibility requirements of that law, but also for determining when a business is not in compliance and for knowing the specific requirements of the notice that they must provide.

Establishing and running a business involves compliance with numerous laws, including tax laws, property laws, health and safety laws, environmental laws, civil rights laws, and many others. Compliance with these legal obligations is part of the cost of doing business.

Business owners, and society as a whole, have had nearly 27 years to become aware of the ADA. Indeed, I would guess that every business owner knows at least one person with a disability and is at least vaguely aware that the ADA exists. Moreover, there are plenty of resources that provide information on ADA requirements to business owners. Indeed, the DOJ offers free technical assistance as well as several publicly available publications. In addition, there are ADA technical assistance centers across the country that offer information, guidance, and training on how to implement the ADA. There is simply no excuse for noncompliance at this point.

The bill is currently in the U.S. House Judiciary Committee; it has 18 co-sponsors. Never in my life as a disabled woman have I been so terrified of losing my civil rights as I am now. With the stroke of a pen, much that the disability community has fought hard for could be undone. What civil rights law will be on the chopping block next?