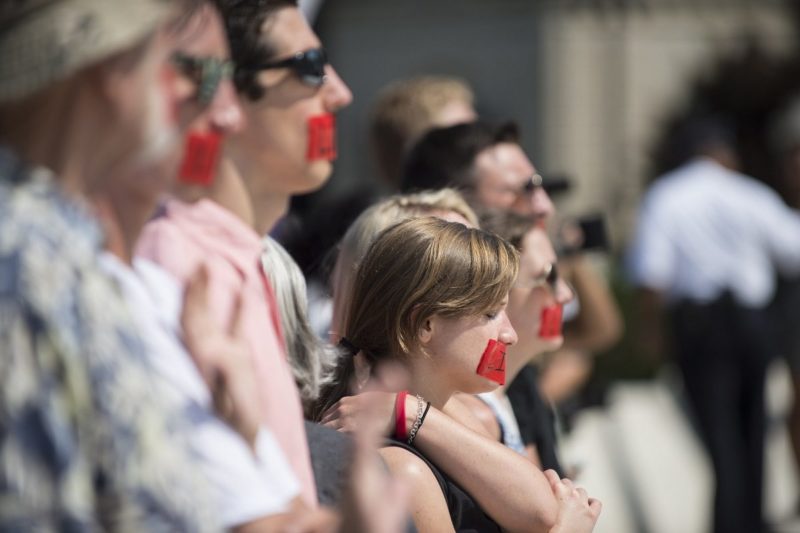 Anti-choice activists can and do still protest outside clinics. They just can’t threaten providers and patients, nor make it impossible to access abortion care—such as by linking arms and blocking a clinic door, for instance—without running afoul of federal law. Pete Marovich/Getty Images

The first test of the U.S. Department of Justice (DOJ) and its willingness to protect the rights of abortion patients and providers happened Saturday, as anti-choice activists launched an old-fashioned, Summer of Mercy-style “rescue mission” at the last abortion clinic in Kentucky.

Saturday’s blockade was a clear violation of the Freedom of Access to Clinic Entrances (FACE) Act, and anti-choice activists know it. The federal government, through the DOJ, is charged with enforcing the law—and the language in President Donald Trump’s recent religious imposition order suggests it will not do so. That order, along with a Trump administration packed full of anti-abortion activists, gives protesters every reason to believe they will have the clear backing of the government in their efforts to continue flouting the FACE Act.

Starting around 6:00 a.m., protesters swarmed the clinic. As many as 100 people showed up, with some reportedly locking arms and blocking the clinic entrance, recycling the direct intervention tactics of previous anti-abortion “rescue missions.” Other videos show OSA members sitting in front of the door without arms linked. According to local outlets, ten were arrested for violating local trespassing law, including Rusty Thomas, the director of Operation Save America (OSA)—the radical anti-abortion group formerly known as Operation Rescue.

Direct assaults and targeted clinic intimidation like Saturday’s have largely dropped since the enactment of the FACE Act, thanks in large part to the fines associated with violations of the law. Signed into law in 1994, the FACE Act prohibits the use of “force, threat of force or physical obstruction” to prevent someone from providing or receiving reproductive health services. Violations of the FACE Act can result in both criminal and civil penalties. Since 2016, however, incidents of clinic threats have been back on the rise.

In the early ’90s, a wave of anti-choice clinic protests saw people forcing their way into clinics, blockading clinic entrances, and harassing patients and providers. These protests culminated in 1991’s Summer of Mercy, a wave of actions focused on the clinics of Dr. George Tiller in Wichita, Kansas. And the violent momentum didn’t stop at protests: In 1993, abortion provider Dr. David Gunn was murdered in Pensacola, Florida. The FACE Act was enacted the next year.

Anti-choice activists can and do still protest outside clinics. They just can’t threaten providers and patients, nor make it impossible to access abortion care—such as by linking arms and blocking a clinic door, for instance—without running afoul of federal law.

Still, they have long complained that laws like FACE as well as state- and municipal-level abortion clinic protections infringe on their First Amendment rights of protest and speech. So far, the courts have largely rejected claims like these. But in 2014, the U.S. Supreme Court slid closer to protecting the rights of protesters over patients in McCullen v. Coakley, the challenge to a Massachusetts buffer zone law brought not by OSA protesters but instead by self-proclaimed “plump grandmas.” It would be reasonable, then, to see anti-choice activists launch another defense along these “free speech” lines following Saturday’s arrests.

Pay attention to Thomas’ framing here around Saturday’s Louisville siege. “We never go to protest anything,” said Thomas in his interview with the Courier-Journal. “We are ministers of the gospel of our Lord and Savior, Jesus Christ, and we go to proclaim through word and through Godly action, his great truths and his great Salvation and also to confront our national evil and national sin called abortion and … to rescue these children who are being led to slaughter and provide for them a defense and a voice.”

Thomas and other activists calling themselves ministers is intentional. It is an attempt to invoke legal protections around communications like anti-choice activist Angel Dillard successfully did to protect her jailhouse communications with Scott Roeder—who was associated with Operation Rescue—in her trial for threatening Dr. Mila Means, the abortion provider set to take over Tiller’s practice following his murder by Roeder.

It’s also an attempt to paint their activities as “religious exercise,” to advance their likely claims that attacking clinics is part of their right to full “civic engagement.”

Saturday’s siege by OSA was a test on several fronts: It was a test of local law enforcement to advance the group’s philosophy of the “lesser magistrate” doctrine. That doctrine, which is rooted in conservative Christianity, argues law enforcement officers are justified in opposing policies or orders they consider unjust or morally wrong. Roeder used a variation of the lesser magistrate doctrine to argue Tiller’s murder was a “justifiable homicide,” because it prevented the doctor from continuing to provide abortions. Robert Lewis Dear, the man who has admitted to holding siege a Colorado Springs Planned Parenthood and killing three, suggested in his legal competency hearing last year that he intended to raise a justifiable homicide defense as well if he ever stands trial. And anti-choice activists, including OSA, argue that it supports local officers’ failure to endorse noise ordinances or trespassing laws in situations like Saturday’s and other protests.

The attack on the Louisville clinic was also a test of Republican Gov. Matt Bevin, who has made no secret about his goal of closing it. The clinic—the last in the state—currently remains open by federal court order, after the governor helped push regulations designed to close it. Bevin has met with OSA leadership, and they consider him an ally. As a result, the group has focused its efforts in Kentucky.

In fact, Thomas told the Courier-Journal the group would be back in July: “That is a tremendous opportunity before you all to become the first surgically abortion-free state in the United States of America and so, we’re praying Kentucky will lead the way out of this blood guiltiness that’s upon the land.”

Maybe most importantly, Saturday’s events in Louisville were also a test of the Trump administration to see how far its recent executive order on so-called “religious freedom” will protect activities like abortion clinic “rescue missions.”

Section 1 of the order states that “federal law protects the freedom of Americans and their organizations to exercise religion and participate fully in civic life without undue interference by the Federal Government. The executive branch will honor and enforce those protections.” By itself, this language imposes no new law, but it does send important signals to groups like OSA and other radical anti-choice activists: The Sessions DOJ has your back.

Then there is Section 2 of the order, which reads that “all executive departments and agencies … shall, to the greatest extent practicable and to the extent permitted by law, respect and protect the freedom of persons and organizations to engage in religious and political speech.” This section also conveys the Trump administration has no intention of enforcing the FACE Act, either directly or by working with local law enforcement that may seek the DOJ’s assistance in dealing with ongoing targeted clinic protests to come.

In fact, conservatives had primed the pump for backing off FACE enforcement during the Obama administration. Prior to the election, Sens. Ted Cruz (R-TX) and Mike Lee (R-UT) sent a letter to then-Attorney General Loretta Lynch complaining that DOJ was too focused on investigations of abortion clinic harassment and violence under FACE.

Now, the dangers to abortion patients and providers have taking a terrifying lurch forward. The Trump administration has signaled to abortion opponents and other Christian extremists that they do not need to recognize fundamental civil rights like reproductive autonomy, so long as they stage their attacks on those rights as an exercise of religious freedom. As a result, extremists are energized and ready to renew their attacks on clinics and patients, as Saturday’s siege in Louisville demonstrates. And there is little reason to think anti-choice radicals won’t increase pressure on clinics and lawmakers, particularly in those states with only one abortion clinic remaining and those with religious imposition laws.

Activists may have met last summer to celebrate the 25th anniversary of the Summer of Mercy. But if Saturday’s actions are any indication of their future plans, this summer will be the official reboot of those early, increasingly violent, attacks on patients and providers.