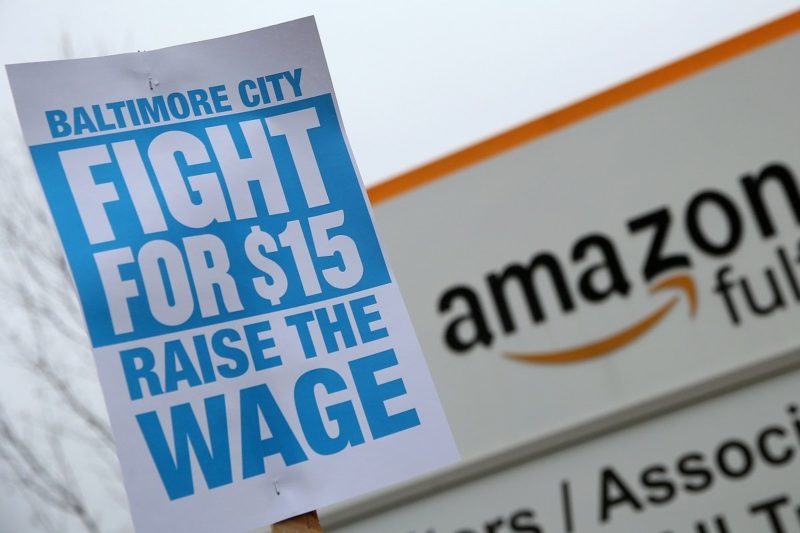 Maryland minimum wage workers earn $8.75 per hour and will begin earning $9.25 per hour in July, according to provisions in the Maryland Minimum Wage Act of 2014. Win McNamee/Getty Images

Maryland activists and Fight for $15 supporters are picking up where they left off last year in an effort to raise the state’s minimum wage to $15 per hour even as some Maryland Democrats fight the wage-boosting effort.

Activists and living wage advocates testified during a House Economic Matters Committee meeting Tuesday in support of HB 1416, which would raise Maryland’s minimum wage to $15 and eliminate the subminimum tipped wage in Maryland. Introduced in February by Del. Jeffrey D. Waldstreicher (D-Montgomery County), HB 1416 would require all Maryland workers earn $15 per hour by fiscal year 2024, which begins July 1, 2023.

The new bill would require people who work at companies with at least 26 employees to earn at least $15 per hour by July 2022, while those at smaller enterprises would earn the same wage the following year.

The bill would eliminate the subminimum tipped wage in July 2025 and would require employers to adjust all wages based on changes in the Consumer Price Index beginning the following year.

Justin Vest, a lead organizer at Progressive Maryland, told Rewire that the new campaign is building on the “momentum and anger from constituents cheated out of a raise in Montgomery County.” Montgomery County, Maryland, had become the first jurisdiction in the state to pass a $15 minimum wage, but the effort ended in January when County Executive Ike Leggett (D) vetoed the measure.

The Baltimore City Council recently gave preliminary approval to raise the city’s minimum wage to $15 by 2022, the Baltimore Sun reported.

If passed, the state bill would become effective in October, allowing Maryland to join the ranks of Washington, D.C., and New York, where lawmakers recently passed $15 minimum wage laws.

“Overall, we do support the legislation,” Vest said. “Tipped workers are often left out of these types of bills or used as a bartering chip.”

Maryland minimum wage workers earn $8.75 per hour and will begin earning $9.25 per hour in July, according to provisions in the Maryland Minimum Wage Act of 2014.

Tuesday’s hearing coincided with the launch of Progressive Maryland’s new Fight for $15 campaign, which voiced some reservations about the wage bill.

A provision that delays the new minimum wage required for smaller companies perpetuates the notion that those outfits struggle to pay higher wages, Vest said. Most small businesses in Maryland, he said, already pay nearly $15.

Vest added that HB 1416 allows the governor to initiate a “pause button” mechanism to temporarily stop minimum wage increases during the phase-in period. The mechanism would be based on recommendations from the Board of Revenue Estimates, which estimates the state budget.

The concerns come amid Progressive Maryland’s petition for Gov. Larry Hogan (R) to hold a public meeting to reveal his views on President Trump’s policies, including those related to reproductive health, immigration, and the Affordable Care Act.

Nienke Grossman, a law professor and deputy director of the Center for International and Comparative Law at the University of Baltimore, who authored a letter as part of the petition, said the governor’s office had ignored phone calls and deleted and blocked Facebook posts from concerned constituents.

Spokespeople for Hogan did not respond to a request for comment about HB 1416.

Jennifer Dwyer, a lead organizer for Progressive Maryland who testified Tuesday, cited Maryland Community Action Partnership data that said families cannot survive in any part of the state while earning less than $15 per hour.

She told lawmakers the subminimum wage is rooted in racism and developed after the Civil War because employers wanted to avoid paying newly freed Black people. These companies, she said, left it up to customers to compensate Black workers.

Dwyer said in an interview that eliminating the tipped wage would protect women restaurant workers who are subject to rampant sexual harassment. Sixty percent of women reported such abuse in a national study.

The subminimum tipped wage in Maryland is $3.63 per hour, just $1.50 more than the federal requirement. Earned tips for the week combined with the tipped wage must equal the state minimum wage. Otherwise, employers must make up the difference.

At Tuesday’s hearing, a Hyattsville, Maryland resident who was raising his 15-year-old sister following the death of their mother said his paychecks at a Safeway grocery store weren’t enough and kept his family from affording college tuition and purchasing a car.

One person cited the National Low Income Housing Coalition’s “Out of Reach” study that said working families need to earn more than $25 per hour in the District of Columbia, Maryland, and five other states to afford a two-bedroom unit.

Saru Jayaraman, co-director of Restaurant Opportunity Centers United, noted that opposition for increasing the minimum wage comes from the National Restaurant Association and its Maryland affiliate. The powerful trade lobby, she said, represents Fortunate 500 chains, such as McDonalds and Darden Restaurants, which pay most employees less than $15 per hour.

Maryland Community Service and Working Families in Maryland were among the many groups that testified in support of HB 1416 on Tuesday.

One opponent representing the car wash industry testified that the bill applied a “one-size-fits-all” approach to improving wages and that some business owners would not be able to afford to pay workers $15 per hour.