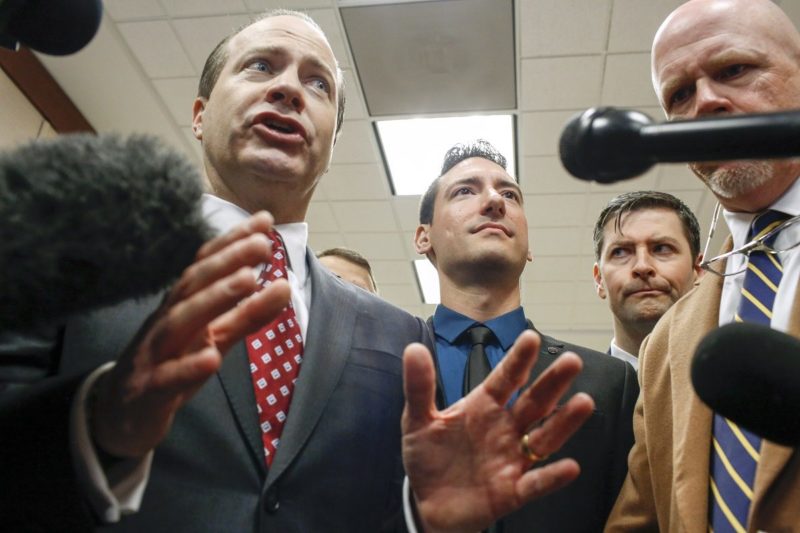 The need for vigilant fact-checking in 2016 did not—by any stretch—begin or end with the presidential election.

This year, abiding lawmakers, with the help of anti-choice activists, glommed onto pseudoscience or discredited research to push policies that impede reproductive health-care access.

Here are just a few of the most memorable instances of lawmakers and politicians—including the president-elect—employing junk science in an effort to restrict a constitutional right.

Led by Rep. Marsha Blackburn (R-TN), the so-called Select Investigative Panel on Infant Lives waged what congressional Democrats have called a “witch hunt” against abortion providers and fetal tissue researchers, at times relying on false claims to advance the investigation. In May, for example, the panel subpoenaed an abortion provider and community first responders, based on the unfounded assumption that hospital transfers indicate medical wrongdoing. The panel’s investigation will continue into 2017.

Utah adopted a new law requiring doctors to administer anesthesia to a fetus before an abortion at or after 20 weeks’ gestation. The first of its kind in the country, this restriction is based on the unsubstantiated idea that fetuses can feel pain at that point in pregnancy, despite an exhaustive scientific review to the contrary. Doctors have called this law unfeasible and pointless, and said there is no medical standard they can use to follow it.

Utah is also the latest state where Republican lawmakers are gearing up to propose legislation that would force doctors to tell patients that medication abortion can be “reversed,” an unfounded idea supported by one unscientific case series published in 2012 by two ideologically driven doctors. That paper’s authors claimed that they gave large doses of the hormone progesterone to six women after they had all taken the first (but not the second) of a two-drug abortion regimen. The pregnancy continued for four of them. The American Congress of Obstetricians and Gynecologists (ACOG) says the continued pregnancies are not necessarily attributed to the doctors’ dosing of progesterone and opposes so-called “abortion reversal” laws on the grounds that they are scientifically baseless.

Despite the lack of evidence, Arizona and Arkansas in 2015, and South Dakota in 2016 enacted similar “abortion reversal” laws, though Arizona reversed its law this year after the state could not locate a qualified expert witness to defend it on scientific grounds. Meanwhile, more and more fake clinics, also known as “crisis pregnancy centers” (CPCs), claim to offer this service.

In September, the California legislature passed a law inspired by Rewire’s reporting that tightened nursing education standards, requiring that coursework must involve “scientific knowledge or technical skills required for the practice of nursing.” That law effectively closed a loophole—which Rewire first reported on in January—through which anti-choice groups were teaching their ideology to nurses, including the unsupported notion that medication abortions are reversible.

The state updated this ironically titled “A Woman’s Right to Know” booklet for the first time in 13 years as part of a 2003 law called the Texas Woman’s Right to Know Act, which mandates that abortion providers inform pregnant people of the medical risks—both substantiated and unsubstantiated—associated with abortion care. It’s just one example of state laws passed in recent years that require abortion providers to tell patients inaccurate or misleading information about abortion.

Far from simply informing patients of factual risks of this medical care, the state’s pamphlet has for years pushed falsehoods that abortion causes mental illness and breast cancer, despite consensus among the major medical institutions to the contrary. Among the newest updates in this booklet is the unfounded claim that fetuses are capable of feeling pain at 20 weeks.

Overall, Texas’ pamphlet emphasizes the medical risk of abortion care, even though government reports show that abortion is highly regulated and overwhelmingly safe. State officials ignored health experts who alerted them to the fallacies in an earlier draft version of this pamphlet published over the summer.

During the final presidential debate, in October, President-Elect Donald Trump responded to a question about later abortions by arguing that under current law, “You can take the baby and rip the baby out of the womb in the ninth month on the final day. And that’s not acceptable.”

Rewire’s Jodi Jacobson deftly unpacked this response and explained the myriad ways it contradicted facts and reason. During this election cycle, Trump was not the only Republican presidential candidate to claim that people commonly have abortions all the way through, and even on, their due dates.

The reality, however, is that abortions during the third trimester are extremely rare and are often sought due to health issues that arise in the pregnant person or in the fetus, which are often undetectable before the second trimester. Approximately 1 percent of abortions occur after 21 weeks of pregnancy. Federal abortion law makes clear that states can impose certain limits on abortion later in pregnancy that do not compromise the pregnant person’s health or life. And to that end, many states do restrict access to abortion during the second trimester.

“Inflammatory statements [like those made at the debate] demonstrate the callous misrepresentation of medical realities and complex situations faced by both patients and their physicians,” Dr. Diane Horvath-Casper, an OB-GYN and reproductive health advocate, told Rewire.

Given Trump’s flagrant disregard for the truth when it comes to abortion, it should come as no surprise that his pick for secretary of the Department of Health and Human Services (HHS) belongs to a medical organization that opposes evidence-based science on vaccinations, HIV, and abortion.

U.S. Rep. Tom Price (R-GA) is a member of the Association of American Physicians and Surgeons (AAPS), which for years has promoted the false claims that abortion directly causes breast cancer. The group also supports the idea that fertilized eggs should be recognized under the law as persons, which would effectively criminalize abortion and some forms of birth control. Further, APPS opposes vaccinations and anti-tobacco health campaigns.

Price’s congressional record suggests he is at least somewhat aligned with AAPS’ views on abortion and contraception. He co-sponsored the scientifically dubious federal “Pain-Capable Unborn Child Protection Act”—which would have criminalized abortion after 20 weeks—as well as a failed “personhood” measure in 2007.

Price has been long opposed to the Affordable Care Act’s birth control benefit, which requires employer-sponsored health-care plans to cover contraceptives as preventive care without cost sharing. In a 2012 interview, Price indicated that he could not fathom the notion that some women might not be able to afford contraception.

In a similar snub to science, Trump has nominated a climate-change skeptic to lead the Department of the Interior.