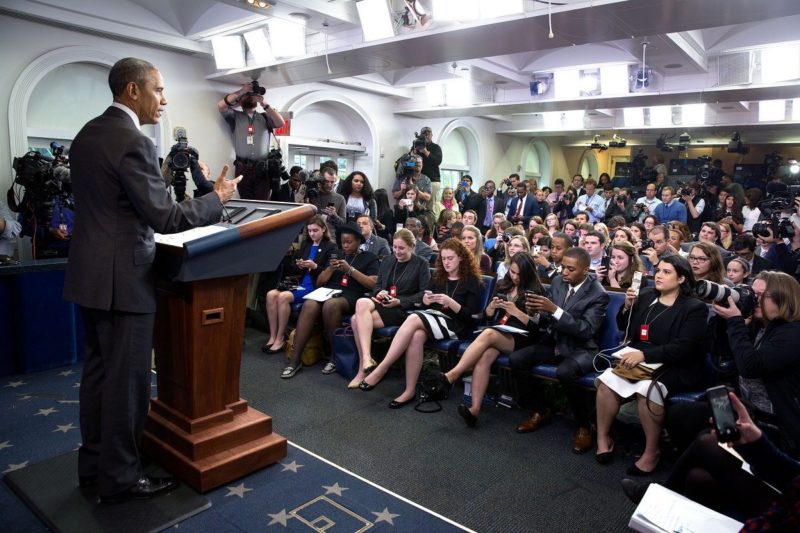 Obama has nothing to lose politically by taking a more robust stand on reproductive rights during the sunset days of his administration. In fact, embracing abortion and sexual health for women would serve to strengthen his legacy toward women and girls. The White House / Flickr

On June 14, the White House will host the United State of Women Summit to, as its website explains, “celebrate the progress we’ve made on behalf of women and girls and to talk about how we’re taking action moving forward.” Yet reproductive rights are scarcely included.

Six themes are on the agenda: economic empowerment; educational opportunity; violence against women; entrepreneurship and innovation; leadership and civic engagement; and health and wellness—”looking at health coverage, preventative care, pregnancy and more.” Speakers will discuss a number of topics to “inspire all of us to take action on June 14th and well after.” The audience is to be made up of advocates and leaders hand-selected by the White House.

Prenatal care is highlighted in the programming descriptions. Contraceptive coverage is mentioned as part of the Affordable Care Act. Maternal mortality and HIV prevention is discussed as an issue of global health, although these issues remain urgent within the United States as well, with women of color experiencing unconscionable disparities in care. Yet the word “abortion” is nowhere to be found.

This, despite the fact that in the last five years, states put upwards of 288 new abortion restrictions on the books, which is more than a quarter of the total such laws adopted since Roe v. Wade. It’s not stopping. In the first three months of 2016, states introduced 411 new abortion restrictions. The “pro-life” dream is coming true: Clinics are closing, specific methods of abortion are being banned, and those women who take matters into their own hands are starting to trickle into jails under fetal homicide laws that backers swore wouldn’t be used to prosecute women.

President Obama is well aware of these issues. He knows that Congress has established a select investigative panel for the purpose of harassing Planned Parenthood, even after the sting videos created by David Daleiden to bring the organization down were thoroughly debunked. He knows that the incendiary rhetoric used by the activists and politicians colluding with Daleiden sadly and predictably erupted into a terrorist act, leading to the murder of three people in a Colorado Springs Planned Parenthood health center late last year. He knows that five men and three women in Supreme Court robes are considering Whole Woman’s Health v. Hellerstedt, a challenge to Texas’ abortion clinic closure law and the biggest abortion access case in a generation.

In this environment, there is no acceptable excuse for leaving abortion out of a policy agenda for women. Abortion is an inextricable part of the struggle for women’s equality, and as I’ve covered for Rewire previously, you simply can’t do feminism—a commitment to the social and political equality of all people, especially women and girls—and set the controversy of abortion off to the side.

The strategy of trying to make things better for women by talking about everything but reproductive rights doesn’t work. Hushing up about abortion has not magically ended the domestic violence crisis, produced the votes for paycheck fairness, or mandated paid family leave. Leaving abortion to the side has certainly failed to help women parent their children in safe and healthy communities, free of state or systemic violence.

And yet the current plan for the United State of Women Summit is silence. As a time for women’s advocates to gather and outline strategies for moving forward, abortion should be included, period. Obama has nothing to lose politically by taking a more robust stand on reproductive rights during the sunset days of his administration. In fact, embracing abortion and sexual health for women would serve to strengthen his legacy toward women and girls.

Since that history-making day in 2009 when he took office, Obama has mistakenly treated reproductive rights as playing second fiddle to the women’s movement, and to his broader legacy toward dignity, equality, and justice for all. Yes, Cecile Richards has visited his White House 42 times and yes, public actions such as including the birth control benefit in the health-care law and refusing to allow shutdown-happy Republicans in Congress to defund Planned Parenthood show a level of access, commitment, and support.

But when this president convenes a big table, even a women’s summit, abortion is lucky to get a folding chair in the back. Women who have sex are placed in a silo on purpose.

If we’re honest about it, abortion is controversial because affirming a woman’s inherent right to dignity, power, and sexual pleasure is the controversy. This is about gender roles, sexuality, and control—especially over people born into bodies of color and families without wealth.

Either we believe that women are people and deserve dignity, or we don’t. There is no such thing as equality for women if the precondition of equality is that women shut their legs. Justice doesn’t come with behavioral preconditions targeting the very people experiencing injustice.

An advocate for reproductive health, rights, or justice could, on a level, sympathize with Obama for not wanting to have his presidency and even his legacy-minded women’s summit flanked by bloody fetus posters and buses full of Troy Newmans. But the threat of a sideshow shouldn’t stand in the way of justice. On other issues, this president and his administration have proven capable of growing and changing, as with Obama’s journey to embrace marriage equality. Or, more recently, consider the administration’s clear and firm stance for equality in the face of outrageous discrimination and lies peddled by the right wing, as when it filed suit against North Carolina’s bathroom discrimination law as Attorney General Loretta Lynch told the transgender community, “We see you.”

Not so with reproductive rights. Even the signature accomplishment of the Affordable Care Act—the birth control benefit—was tarnished by new restrictions on abortion funding, and contraceptive coverage exemptions that continue to grow and fail to placate the opposition. President Obama traded away Washington, D.C.’s right to local abortion funding in 2011. His administration attempted to overrule the Food and Drug Administration’s decision to make emergency contraception available over-the-counter without age restriction, an issue that had to be resolved by force of a court order. To date he has failed to take action to correct a ridiculous interpretation of the Helms Amendment, which bars funding in foreign assistance for abortion “as a method of family planning,” and surely was meant to include customary exceptions for rape, incest, and life endangerment. The president has the sole power to fix this—no congressional action required. An executive order on Helms that stands up for rape victims in war zones and women who can’t live through a pregnancy should be a no-brainer.

In any case, this issue can and should be corrected now. Abortion should not be censored out of Obama’s big party for feminism, nor from feminism in general. A webmaster can add reproductive rights to the United State of Women Summit website, and the programming can be updated. President Obama can, for that matter, sign a life-saving executive order on Helms. And his legacy toward women that he cares so much about will be vastly improved.

CORRECTION: This piece has been updated to reflect the correct number of themes on the agenda at the summit.