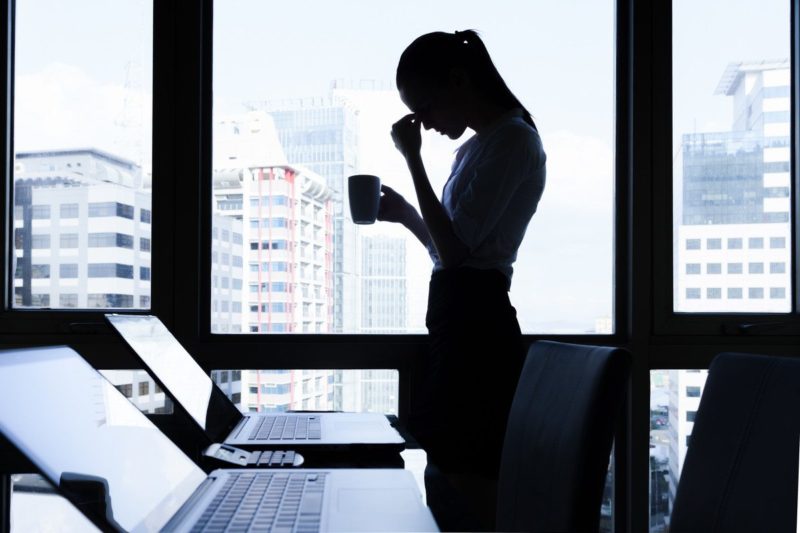 Having to repeatedly disclose, educate, make promises about our competency, and ask for understanding from those around us are some of the things that are actually a lot for people with mental illnesses. Shutterstock

It’s delivered with the tone of a compliment almost every time. I don’t seem like the kind of person who has a mental illness: someone broken and unstable, borderline competent at best. Or two. Or three. With a fourth diagnosis pending. I seem capable and intelligent and professional—all words that, according to depictions put forth by society and the media, don’t sync with the phrase “mentally ill.”

Many of us whose conditions don’t require treatment that causes extended work absences, like periodic hospital stays, remain hidden for personal and career reasons. We rightly fear retribution or discrimination at work, and being seen as broken or incompetent in our personal lives. But by staying silent, even for good reasons, we unintentionally perpetuate the assumptions that mental illness equals disruptive behavior, potential violence, and a hostile work environment, because most people aren’t given the opportunity to personally experience a mentally ill person being competent. Instead, they’re left with media and fictional depictions that paint us as dangerous and volatile, thus further incentivizing us to stay hidden.

If this question were asked by loved ones who wanted to learn what I need, rather than being unhelpful bystanders by asking unnecessary, potentially harmful emotional labor of me, I would respond with kindness. But this is the sort of question asked by everyone from potential partners to employers and contractors who want to know what they’re getting into by inviting me into their lives. When I answer that I have been diagnosed with extreme, disability-level attention deficit disorder (ADHD), dysthymia (intermittent, chronic depression), anxiety, and likely post-traumatic stress disorder, people cringe because that’s more than a mouthful. Even people who incorrectly assume those are all fixable conditions that I can get over or learn to live with think—and say—things like: “Wow, that’s…a lot.”

Having to repeatedly disclose, educate, make promises about our competency, and ask for understanding from those around us are some of the things that are actually a lot for people with mental illnesses. We cannot constantly shoulder this along with our already packed schedules balancing doctors’ appointments, trips to the pharmacy, and tracking medications and side effects. And those are the mere inconveniences (and expenses) for those of us who have access to decent mental health care. The Affordable Care Act reduced insurance discrimination, but has left predictable, sizable gaps in care for many of us, according to the National Institutes of Health and backed up by reporting at The Washington Post, U.S. News and World Report, USA Today, the New York Times, Newsweek—name the outlet, it has likely published on it over the last four years.

The hurdles that are more challenging to report on because they are cultural and systemic are the myriad ways disclosing our mental health conditions can affect how we are treated in personal relationships as well as the workplace.

As I dealt with poverty over the years, my friends and family—and even my employers in the service industry—mostly attributed my struggles with timing and economic issues in the country at large. I was committed to the “making it work” life philosophy. I woke up every day and begrudgingly grabbed my bootstraps and pulled till I fell down. People said things like “Oh, she always lands on her feet!”—as though that’s effortless, not a perpetual conscious effort to never burn bridges and be a reliable employee. I maintained my competent reputation, one I depended on to make sure I always had enough work to pay rent. I couldn’t have risked taking time off to see doctors and therapists, even if my insurance before the ACA would’ve covered it.

For a long time, I also didn’t want to be officially labeled “mentally ill.” The reality of a “permanent record” may be overblown by our grade school experiences, but the concept is still very much true thanks to employee reviews, medical records, and the like. Once you’re labeled, you’re labeled. There’s no guarantee, even if you like your current boss, that you’ll like their replacement and you risk co-workers finding out and treating you like you’re broken or possibly dangerous.

The Americans With Disabilities Act (ADA) may require “employers to provide reasonable accommodations” for those of us who are qualified to do a job, but that requires disclosing diagnoses with massive stigma to potential and current employers. It also often requires having a diagnosis that’s recognized as a disability under the law.

The Equal Opportunity Employment Commission (EEOC) guidelines say: “A reasonable accommodation may be obtained for any condition that would, if left untreated, ‘substantially limit’ one or more major life activities, which include brain/neurological functions and activities such as communicating, concentrating, eating, sleeping, regulating thoughts or emotions, caring for oneself, and interacting with others.” However, the diagnoses that come with federal disability status—major depressive disorder, bipolar disorder, post-traumatic stress disorder, obsessive compulsive disorder, and schizophrenia—are typically more recognizable as conditions requiring accommodations. My “less serious” conditions have been easily brushed off by employers and contractors. Everyone has been distracted, felt sad, and been nervous before a presentation, leading many to think my ADHD, dysthymia, and anxiety are passing rather than constant. Sure, I have easier days and rougher days, but I don’t “get over it” and there’s no magic cure—trust me, I’ve looked for one. It’s a long road to a modest level of wellness and some days it straight-up sucks.

Because my conditions are ongoing, and federal law says I don’t have to experience symptoms while I’m actively being treated for my illnesses in order to receive “reasonable accommodations,” it shouldn’t matter if I never feel anxious or nauseated or dizzy. But, I have yet to have an employer or contractor who cared that the EEOC recognizes the way a cubicle setting around other people or required, unnecessary, near-constant engagement with co-workers causes me to basically feel like I’m coming apart at the seams.

“A condition does not have to result in a high degree of functional limitation to be ‘substantially limiting,’” according to the EEOC. “It may qualify by, for example, making activities more difficult, uncomfortable, or time-consuming to perform compared to the way that most people perform them.”

Under this interpretation, I would also seem to qualify for accommodations to mitigate medication side effects that cause about 45 minutes of dizziness in the morning and difficulty focusing even with treatment. When I was working jobs without paid time off, the need for mid-morning breaks to lie down and ride out side effects would have been laughed off. So, instead, I, like many others, stayed hidden.

Eventually, my day-to-day frustrations felt impossible to hide. Talking about my anxiety on Twitter became a coping mechanism. And once I started the process of seeking treatment I realized how complicated and hard it was; I found a lot of relief writing about it openly through the feedback from others who feel less alone, weird, and overloaded with self-blame.

This has gone hand-in-hand with my transition to freelance work. When I’m at home, I can work from my bed and not have much disruption in my schedule. This would be impossible in any typical work environment. I can eat on a schedule dictated by my medications (some have to be taken on an empty stomach, others with food); take a nap if nightmares kept me up; shut off communication to keep from being overloaded; and somewhat control my schedule to make time for doctors’ appointments. I fear new medication side effects less because I don’t have to worry whether or not I’ll be able to drive to or from work, sit up for a full eight- to ten-hour day, or be extremely thirsty. Drinking water constantly also means a stretch of frequent bathroom trips—less of an annoyance at home.

Working from home can’t solve all my problems, though, because I still have to work with and for other people. I can’t tend to every need, for example; I had to reschedule my psychiatrist and therapist last week to write on deadline. Even as a freelancer, I’ve heard plenty of microaggressions and ableist comments: “Why is that taking you so long?”—with no words of appreciation for how much more quickly my neurobiology processes other tasks. I’ve had my need to turn off communication when no tasks were scheduled for one contractor so I could meet other deadlines held against me. For some, having a message app on constantly might not cause problems; for me, it created a perpetual spike in my anxiety.

Still, I was held accountable for someone else’s inability to plan ahead, rather than given an apology for an attempt to interrupt me while I was tending to other work. Because I don’t “seem sick,” and I do good work, I’m expected to go above and beyond to take on tasks that aren’t in my job description or overload myself.

As a consequence of staying hidden, our performance and participation at work and in life suffer even while we manage to “pass” and be seen as “fine” or “normal.” And because we suffer in silence, should any additional complication or symptom—or simply our finally having had enough of dealing with being miserable—lead us to finally seek care, we can have trouble being believed. We experience the ultimate Catch-22: We are seen as just capable enough that we aren’t believed, while being criticized or ostracized when we can’t conform to neurotypical (not affected with a developmental disorder) culture.

This can even bleed over into our doctors’ offices; most screening questions from primary care physicians (still the gatekeepers in our insurance-based medical system) center around symptoms that cause life disruptions. If we have managed too well for too long, no matter how we felt internally, we can be brushed off or receive inaccurate diagnoses. Nearly every conceivable iteration of this has happened to me. I’ve had misdiagnoses, missed diagnoses, revised diagnoses and had to plead my case to get someone—anyone—to maintain my prescriptions after a move while I shopped for a psychiatrist in my new area.

There is no easy fix for these challenges and discrimination; culture change through awareness, education, and workplace trainings will take time and we have to demand them. We need better enforcement of existing EEOC guidelines and ADA law as well as a concerted effort from employers to provide better working conditions. Company-wide flex time, work from home options, and paid personal leave are all policies typically thought of as “family-friendly” that would help everyone and make accommodations largely unnecessary. When everyone can take the time they need, those whose flexibility requirements are tied to a mental illness wouldn’t stand out or be subject to disciplinary action if they chose not to disclose their condition. And as more of those of us who do choose to disclose come forward about our lived experiences, we become a powerful advocacy bloc able to insist on more inclusive, supportive workplace policies.