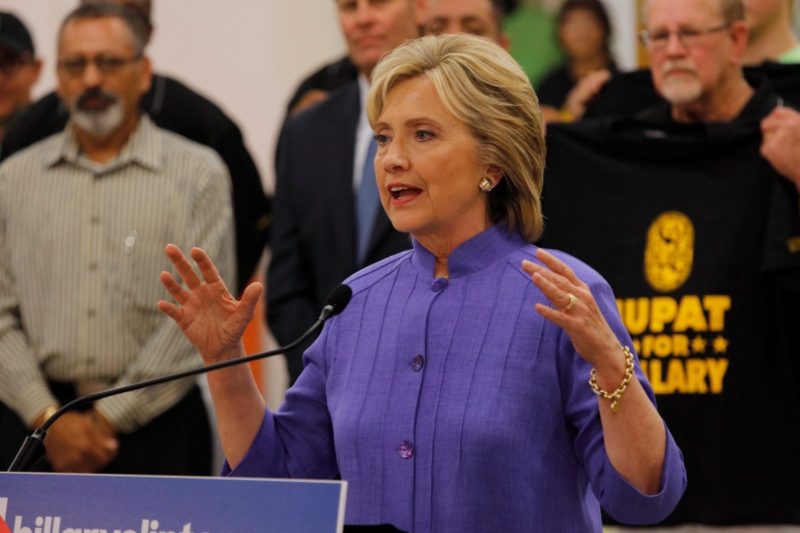 Last Wednesday, midway through a private fundraiser in South Carolina for Democratic candidate Hillary Clinton, a 23-year-old Black Lives Matter activist quietly made her way to the front of the crowd and unfurled a banner that read: “We have to bring them to heel.”

In the exchange that followed, captured on video, Ashley Williams asked Clinton to apologize to the Black community for a speech she made in 1996 celebrating a sweeping new crime bill, during which she referred to “gangs of kids” as “super predators: no conscience, no empathy.”

“We can talk about why they ended up that way,” Clinton continued in the speech, “but first we have to bring them to heel.”

The video made national headlines, and is amplifying a conversation among voters about Clinton’s role in the expansion of racial profiling and mass incarceration in the United States, and her ability—if elected—to deal with the school-to-prison pipeline. (The school-to-prison pipeline is shorthand for the disproportionate rate at which students of color are policed, punished, and funneled out of their classrooms into contact with the criminal justice system.)

The conversation gained steam in February when Michelle Alexander, author of The New Jim Crow: Mass Incarceration in the Age of Colorblindness, penned a piece in the Nation titled “Why Hillary Clinton Doesn’t Deserve the Black Vote.” In her essay, Alexander explored the ways in which then-President Bill Clinton championed a federal “three strikes” law to impose life sentences without parole for offenders convicted of certain crimes, and signed a $30 billion crime bill that created scores of new federal capital crimes and significantly expanded the police force—policies for which Alexander claims Hillary Clinton actively advocated.

While Clinton’s 1996 speech, referenced by Williams in South Carolina, did not explicitly refer to these “super predators” as young people of color, her statement is widely perceived as a highly racialized one, given the disproportionate impact of the Clinton administration’s policies on Black and brown youth.

Clinton acknowledged on Thursday in a statement to the Washington Post, “Looking back, I shouldn’t have used those words, and I wouldn’t use them today.”

Her statement came more than a week after unveiling her $125 billion Breaking Every Barrier Agenda that promises, among other things, to dismantle the school-to-prison pipeline.

Her proposal includes an allocation of $2 billion to school districts to incentivize reform of harsh disciplinary practices, which have been followed by soaring suspension and arrest rates: School suspensions shot up from 1.7 million in 1974 to 3.1 million in 2000, “and have been most dramatic for children of color,” according to the American Civil Liberties Union.

Clinton’s proposal also calls attention to an “ineffective culture of zero-tolerance,” and highlights the over-reliance on “school resource officers”—police personnel deployed in schools who numbered 9,000 as of 2008—as being emblematic of “overly punitive atmospheres that often disproportionately criminalize and stigmatize students of color, students with disabilities, and students who identify as LGBT.”

The agenda also hits out at legislation that allows some states to punish even minor disciplinary infractions—including talking in class or playing on a cellphone—with jail time, such as South Carolina’s Disturbing Schools Law, which resulted in over 1,100 students being referred to the state’s Department of Juvenile Justice for “disturbing their schools” in 2013-2014.

Citing data from the Department of Education, Clinton’s website notes that these laws disproportionately affect students of color, with Black students comprising 27 percent of all referrals to law enforcement and 31 percent of students subject to school-related arrests in 2014—despite representing just 16 percent of public school enrollment.

“I think this proposal is Clinton’s attempt to be responsive to the demands of movement advocates and activists across the country who’ve been pressing both candidates on the Democratic side to respond to racial inequality, mass incarceration, and police violence,” Priscilla Ocen, an associate professor at Loyola Law School in Los Angeles, told Rewire.

“I don’t think it’s accidental that the plan was announced just a few days before [the Democratic primary in] South Carolina—it gives her something to talk to African-American voters about, and it is certainly pragmatic election campaigning,” Ocen said in a phone interview last Thursday. This pragmatic campaigning paid off last Saturday with Clinton’s resounding success in South Carolina, where she secured 86 percent of Black votes, compared to just 14 percent for Bernie Sanders.

“I can’t help but feel that if this was genuinely something at the top of Clinton’s agenda, she would have done something about it when she was First Lady … Instead she simply followed the same ‘tough on crime’ line as so many other politicians,” Cynthia Pong, a former public defender with the Legal Aid Society in the Bronx, and now a consultant for nonprofit social justice organizations at Embrace Change Consulting, told Rewire in a phone interview.

“Throughout the decade of the ’90s and beyond, [Hillary Clinton] and her husband played a huge role in upholding and expanding systematic mass incarceration of people of color in this country. In 1994 she was using some of the most disgusting racist rhetoric about young men of color I have ever heard. After all that, for her now to be saying she is committed to dismantling mass incarceration is disingenuous and even a little suspicious,” said Pong, who has defended clients at various stages of entanglement in the school-to-prison pipeline.

GEO runs over a dozen juvenile facilities through Abraxas Youth and Family Services, which operates under the company’s GEO Care division, while CCA got its start in the early 1980s by acquiring and managing youth detention centers in Tennessee.

“Accepting money from entities that profit from locking people up, while saying you’re going to dismantle the school-to-prison pipeline, sends a completely inconsistent message,” Pong said.

“I think it’s very important that the Clinton campaign completely repudiate all donations from lobbyists for the private prison industry, just as the [Bernie] Sanders campaign has done,” Faruqee told Rewire.

“Sanders has really been a leader in speaking about the moral imperative of removing the profit motive from our justice system. Right now private prison companies are profiting from the incarceration of young people and we’ve seen the impact of this in places like Pennsylvania with incidents like the kids-for-cash scandal,” she said.

Faruqee also said she wants to see and hear more about how candidates intend to address the sprawling juvenile justice system, which incarcerates an estimated 54,000 young people on any given day, according to Youth First. As Rewire has previously reported, youth of color are disproportionately represented in the juvenile justice system, with Black kids experiencing a youth incarceration rate of 605 per 100,000 population, five times higher than the youth incarceration rate of their white peers, which is just 127 per 100,000. In 2013, Black children comprised 21,550 of an estimated 54,148 kids locked up in juvenile detention.

Last Thursday, nine national juvenile justice organizations distributed a letter to all presidential candidates, outlining their shared vision for an overhaul of the juvenile justice system. At publication time, none of the campaigns had responded to the letter, but Faruqee said she hopes Clinton’s agenda will begin to reflect some of the recommendations contained in the joint platform such as closing youth prisons, and reallocating funds towards community-based, family-centered alternatives to incarceration.

Others say the problem runs deeper than Clinton’s agenda suggests.

Clinton’s proposal promises to expend $200 million annually to dispatch “school climate support teams” into districts and schools with high suspension and arrest rates, with the purpose of tackling implicit bias—the subconscious ways in which perceptions based on race, gender, religion, or any number of characteristics feed negative stereotypes—and training educators in de-escalation tactics. But some educators say this proposal fails to closely look at implicit bias and the trauma it creates in classrooms across the country.

“In my experience working in historically and systemically disenfranchised communities of color, in which 99 percent of students are at or below the poverty line, what I see most frequently is a lot of trauma,” said Brittney Elyse Sampson-Thompson, a longtime educator who is currently serving middle school students at a charter school in Philadelphia.

“In schools where there is a large police presence or leaders who are quick to call the police on their students I’ve seen crazy things. When fifth-grade girls are led out of school in handcuffs my first thought is about the incredible ripple effect that will have, not only in the life of that young lady and her family, but also for every other child in the building who witnessed it,” she told Rewire.

“For the child herself it means that the idea of being arrested, of being in a cop car, of waiting in a precinct for her parents to arrive is no longer foreign—it becomes a true experience that she has lived. Add to that the fact that it happened while the child was in school—where she should be safe, not only physically but also emotionally and mentally safe to take risks and to explore and to be a child—and the situation becomes frankly tragic,” Sampson-Thompson added. “We serve in communities that have experienced generations of trauma and if we aren’t actively working against it, we add to it.”

Those whose work has focused closely on the intersections of race and gender in the school-to-prison pipeline also feel the proposal has some glaring gaps.

“Clinton ought to have an intersectional framework for understanding the gender dynamics of racial inequality that make girls vulnerable to both public and private expressions of violence,” said Ocen, co-author of a report on the disproportionate impact of the school-to-prison pipeline on Black girls, which found that they are six times as likely to be suspended as their white counterparts.

“She needs to be attentive to the gendered pathways that lead Black girls to being disproportionately incarcerated in juvenile detention facilities, and to be attentive to the fact that not only are girls and women among the fastest growing populations in prison, but also that the vast majority of them had been victims of physical or sexual abuse prior to being incarcerated,” Ocen said.

“Clinton will continue to have an incomplete understanding of racial justice and an incomplete racial justice platform until she attends to the specific vulnerabilities of girls and women of color,” Ocen added. “Both candidates ought to be listening to the people who are most affected by these policies, listening to their stories, their calls for transformation and their suggestions for what actually works.”