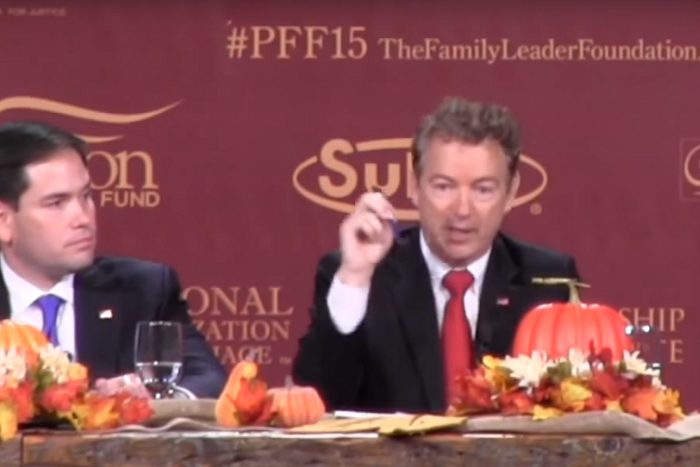 At an event considered the “final exam” for candidates prior to influential evangelical leader Bob Vander Plaats making his endorsement, candidates used the night to blast "political correctness" for interfering with their factually incorrect attacks on abortion. Rand Paul 2016 / YouTube

Seven Republican presidential candidates faced off Friday in Iowa in hopes of winning an endorsement from influential evangelical leader and anti-choice advocate Bob Vander Plaats, using the night to blast “political correctness” for interfering with their factually incorrect attacks on abortion.

The event is considered the “final exam” for candidates prior to Vander Plaats making his endorsement, a major coup for those seeking to woo the evangelical voting bloc that may play a key role in helping to swing the rapidly approaching Iowa caucus.

The Republican candidates spent much of the night lamenting the role of political correctness in the United States, blaming it for putting lawmakers and voters at odds with their hard-line positions against abortion rights. Paul claimed that Republicans have “been pushed, we’ve been bullied and we’ve been beaten down” for their views on the issue, calling for lawmakers to stop being “afraid of political correctness,” reported the Des Moines Register.

“We’re going to make them defend that 7-pound babies have no rights the minute before they’re born,” said Paul. “We can win the battle, but we can’t be afraid of political correctness.”

Fiorina similarly blamed political correctness for the backlash she faced following her false assertion during a Republican presidential debate that the deceptively edited videos released by the discredited anti-choice group known as the Center for Medical Progress (CMP) had shown a “fully formed” fetus with “its legs kicking.”

Dismissing the numerous fact-checkers who debunked her claim, Fiorina took issue with those who continue to bring up that her rhetoric against Planned Parenthood is not based on evidence.

“During one of our Republican debates I made a very strong statement about the Planned Parenthood videos, and that fact that when Planned Parenthood is harvesting body parts it undermines the character of our nation,” Fiorina said. “For the many weeks and months following that, virtually every time I went on the media I was told that simply isn’t happening. It’s not true.”

“There are literally millions of people in this country who still believe it is not true that Planned Parenthood alters abortion procedures and engages in late-term abortions for the purposes of harvesting body parts. That’s how dangerous this political correctness and mix of media decision about what to talk about and what not to talk about has become,” she continued.

Santorum used his time to call for the United States to leverage welfare reform in order to encourage more Americans to get married. When asked by moderator Frank Luntz what he proposed be done about marriage, Santorum pointed to government programs providing assistance to unwed mothers as partially responsible for the issue, asserting that benefits should have “work requirements” and “phase outs.”

“One of the reasons that fathers are in the home and not married to the mother is because the mother, if they’re not married to the father of the child and living in the same place, can receive a whole host of government benefits,” Santorum said. “We’ve now created a system where government is a barrier to marriage for people who need marriage the most, those who are on the margins of society when it comes to economics.”