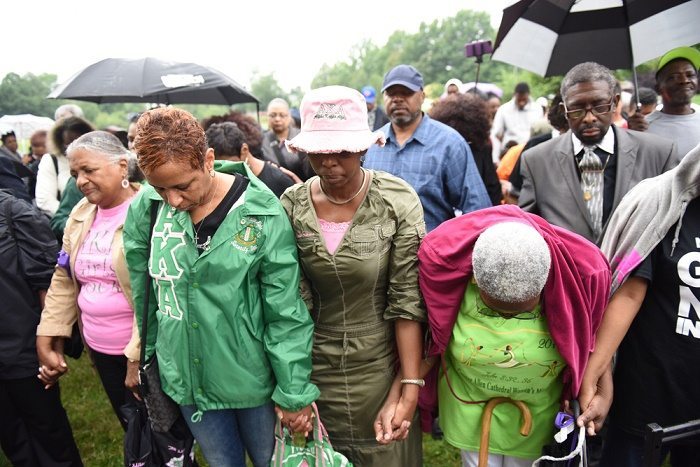 The Charleston church murders on Wednesday, June 17, left the entire country in a state of shock and disbelief, collectively asking in exacerbation, “When will it stop?” At Race Forward we issued yet another statement expressing our solidarity with the victims and communities targeted by racially motivated violence, as well as condemning such acts.

In our national discourse, as evidenced by the media, we either ignore race or attribute clear racial violence to a more benign cause. At other times, we talk about racism in a way that ignores systems and implicit bias. Both scenarios are problematic because they reinforce ideas of white supremacy. In fact, that is precisely how white supremacy works and has evolved. It operates in disguise, it cloaks, and it constantly changes forms. Yesterday’s hooded Klansman is today’s person who takes pride in being “colorblind,” while vocalizing the many dog whistles that opaquely signal racial bias.

There are great harms in ignoring or denying racism and the violence it produces. To begin with, we reinforce the supremacy-based notion that humanity is exclusively reserved for white people. Racism allows whites to retain their humanity, regardless of how vile the act, while Black people must overcome the presumption of being sub-human. In the aftermath of the Charleston church massacre, the media highlighted the humanity of a confessed mass murderer with images of him as a young child opening Christmas presents and surrounded by a loving family. In contrast, when a 14-year-old girl at a pool party was slammed to the ground by an out of control police officer, we were told she was “no saint.” Trayvon Martin and Michael Brown lost their humanity in the narrative that described them as having almost super-human strength, strength that only a bullet could subdue. Racism cannot be solved until our society views Black people as being inherently worthy of our collective humanity. And this humanity is gratis; it need not be earned or given after having demonstrated adherence to a white-imposed expectation of rectitude or any other standard of idealized behavior that only applies to Blacks.

An uncomfortably large number of headlines relating to the shooting of nine Black worshippers at Emanuel African Methodist Episcopal Church demonstrates the common and almost reflexive portrayal of a white perpetrator of racially motivated violence as an outlier: a lone gunman who acted outside of the bounds of societal norms, who holds notions and ideas about race for which the source cannot be traced. When we talk about the event in this way we disavow the role of the individual and the role our society played in creating the environment that contributed to the racist act. In fact, the oft-heard narrative that demands personal responsibility, and is wrongly used to condemn communities of color, is conveniently and instantaneously discarded, while collective responsibility is abandoned as well. Racism and its progeny of racial violence, it seems, are among the only conversations where it is permissible to avoid ownership and accountability. And until this changes, we will stay stuck in circular conversations that produce little or no results.

However, I remain firm in my belief that we can talk about racism and we can get it right. If we are sincere in achieving our stated goals of equity and justice, we have to talk about racism in a productive way. Productive conversations on race require an understanding of systemic racism and implicit racial bias.

Systemic racism is a key concept to understanding racism, but it can be difficult to describe. Simply put, it refers to the flaws in our society and institutions that contribute to race-related outcomes. For example, talking about the race-related outcome of the disproportionate incarceration rate of Black males without addressing the flawed policies of “stop and frisk,” racial profiling, and the overall criminalization of Blackness, ignores systemic racism. Our interpersonal conversations and media coverage must be systemically aware; systemic awareness is a necessary ingredient to developing systemic solutions.

Another requirement for productive conversations on race is acknowledging the role of implicit racial bias, those unconscious attitudes and stereotypes derived from society. Too often conversations on race are reduced to the question of whether an action was intentional or not. The answer is: It doesn’t matter. We all have implicit biases that impact our decisions and actions in our personal and professional lives. Research has revealed the existence of implicit bias in institutions ranging from health care to schools to the criminal justice system to the media. Having these human tendencies doesn’t make one a bad person nor are we stuck with them. Though these biases are not our fault, they are our responsibility to change.

We engage in a dangerous fiction when we don’t talk about racial bias and racial violence. In this fiction we believe it is actually possible to solve a problem without talking about it and talking about it productively. However, our life experiences show the fallacy in such thinking.

So, talk about racism, we must—and we have to talk about it in the right way.