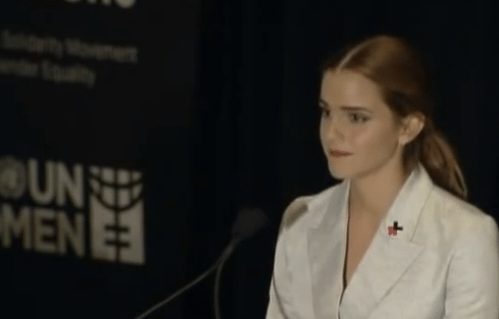 Over the weekend, Harry Potter star and new UN Women Goodwill Ambassador Emma Watson gave a powerful speech in defense of feminism that issued a “formal invitation” to men to make gender equality their issue too. un.webtv.org

On Friday, the White House unveiled a new public relations campaign called It’s On Us, which urges all Americans, and young men in particular, to take responsibility for preventing and ending sexual assault.

Over the weekend, Harry Potter star and new UN Women Goodwill Ambassador Emma Watson gave a powerful speech in defense of feminism that issued a “formal invitation” to men to make gender equality their issue too—partly because gender inequality and binaries can hurt men as much as they hurt women, and partly because it’s just the right thing to do—as part of a campaign dubbed HeForShe.

Both campaigns have slick websites where visitors can sign pledges to make a personal commitment to being part of the solution to gender inequality and sexual violence.

And both campaigns, however effective they end up being themselves, are part of a cultural shift toward recognizing that women’s rights can’t be considered in a vacuum. That survivors of sexual violence can’t be the only ones fighting for their own justice. That men have a stake (even a selfish one) in the goals of feminism, because gender binaries limit their humanity too, and because women prospering means society prospering. That you can’t talk about “social issues” like reproductive rights without also talking about the economics of being able to afford birth control, abortion care, or child care, and how the ability to do that is doubly crippled by the fact that women earn less, whether it’s due to discrimination or “choices” that often aren’t choices at all.

The Democratic Party has seized on many of these points in recent months, ahead of the midterm elections. President Obama and congressional Democrats have been pushing a policy agenda with a more holistic approach to the idea of “women’s issues”—equal pay, family leave, minimum wage increases (since women make up about two-thirds of minimum wage workers), campus sexual assault prevention, and trying to repeal setbacks to women’s health like the Supreme Court’s decision in the Hobby Lobby case or state-level abortion restrictions cynically designed to close clinics.

This Congress being this Congress, we aren’t likely to see that kind of change through legislation any time soon—advocates have to hope for executive orders or significant cultural shifts.

But thanks to the democratizing influence of Internet and social media, cultural shifts are at least a little easier to come by these days. Fewer gatekeepers to media access means more avenues for marginalized people to be heard and even to work their way up into more mainstream venues.

“I know that the Internet has been one of the biggest reasons why the campus sexual assault movement even made it to the White House,” campus sexual assault activist and writer Wagatwe Wanjuki told Rewire. (Wanjuki is a former Rewire employee.) “If it wasn’t for that, who knows how much longer we would have had to wait to have the president acknowledge that college rape is an issue and we need to do something about it.”

Publicity for the It’s On Us campaign is mostly online at this point, which may be a function of its intended outreach to Millennials. Cable giant Viacom and video game giant Electronic Arts are joining the push through their social media and online properties for now, although White House officials told reporters last week that there may be a push on broadcast TV in the future. There’s also a significant “IRL” grassroots push, with student leaders at over 200 campuses committing to participate in the campaign; the star-studded PSA from the campaign’s website is supposed to be shown on Jumbotrons at major college sporting events.

The visibility afforded by the Internet has a dark side, of course. That was on display this week when Internet trolls threatened to release nude photos of Emma Watson for having the audacity to say in public that men and women should be treated equally.

Bizarrely, the threat—a “countdown” to when her photos would be released—turned out to be a Russian-nesting-dolls-style hoax, in the end the work of serial spammers seeking clickbait. The incident was a potent illustration of why Watson’s message mattered: many still think that women’s privacy and safety is at best a joke. Women who speak out on feminism are reliably targeted for it, and the more high-profile the woman speaking out, the more high-profile the attacks on her can be.

But there are many benefits to high-profile women speaking out. The United States has more female senators now than ever before, many of whom have championed attention-getting women’s rights causes in the last several years. The celebrity angle cuts both ways: the more cultural idols like Watson or Beyoncé speak out in support of feminism, the more people hear the message.

As Laura Dunn, founder of the sexual assault survivor advocacy group SurvJustice, told Rewire, campaigns like HeForShe, with an icon for the “Harry Potter generation” behind them, make issues around feminism and sexual violence prevention easier for younger generations to understand.

“It shifts their mindset, and maybe challenges the norms accepted by older generations too,” Dunn said.

That is more than a symbolic change. Take our legal system: “The reason a lot of sexual assault cases aren’t prosecuted is, ‘The jury won’t understand, they won’t like that you were drinking,’ that kind of thing,” Dunn said. But when today’s kids grow up to prosecute these cases or serve on juries, “you won’t need an expert to explain rape culture.”

Dunn said that another big part of this shift, especially on the issue of campus sexual assault in the last few years, is due less to celebrities speaking out than to survivors like herself telling their stories to the media, sometimes coming out with their full names and faces. They were no longer anonymous Jane Does but real women demanding real justice, which made some people start to sympathize with them and share their outrage.

The issue has gotten the most attention this decade, but campus sexual assault really emerged into the national consciousness starting around 1991, S. Daniel Carter, director of the 32 National Campus Safety Initiative, told Rewire, which is when a “Campus Sexual Assault Bill of Rights” amendment to what is now called the Clery Act was introduced. The standards for enforcing these rights actually haven’t changed much since then, Carter said, but many colleges still weren’t aware of their obligations to prevent and address sexual assault before the administration released a “Dear Colleague” letter in 2011 clarifying those guidelines. That letter, and the unprecedented number of investigations today against colleges that violate Title IX civil rights provisions by poorly handling sexual assault cases, are almost solely thanks to a groundswell of advocacy over the last few years from survivors like Dunn, Wanjuki, and the networks they created through social media, Carter said.

Dunn said she was especially pleased with the It’s On Us campaign and Obama’s speech about it, not just as an advocate but also as a survivor. She got emotional recalling how much it meant to hear the president acknowledging the heavy burden that survivors have carried for so long, and the need for society to help them lift it by taking shared responsibility for the problem. “It was so well-spoken and so very true,” she said.

Wanjuki said the White House has done a better job than any administration before it on the issue of sexual assault in general. “Their willingness just to talk about it, and to have it be so visible and get the president of the United States involved, is really groundbreaking,” she said. “And they’re actually talking to advocates, survivors, people on the ground, not just ‘experts.’”

The Obama administration is talking about reframing sexual assault as a cultural problem, which is also what Watson and HeForShe are doing with women’s rights across the globe. While acknowledging that sexual assault can be perpetrated by and against people of any gender, both campaigns imply that the cultural problem lies with men—not because they are all blameworthy, but because they haven’t been encouraged by culture to take a stand on the issue. White House officials pointed last week to research that shows most young men aren’t comfortable about violence against women, but don’t speak out because they overestimate their peers’ acceptance of it. Watson’s speech gave men similar credit by officially inviting them to join a conversation in which they might have felt unwelcome.

Of course, cultural campaigns have limits. Dunn says there were sexual assault awareness campaigns in place when she was in college, but that didn’t change anything about her 2004 rape at the University of Wisconsin, or her long struggle for justice against hostile campus and law enforcement officials.

And Wanjuki, while she thinks that It’s On Us is a great start, fears it might encourage oversimplification of a complex issue: “They talk about ‘It’s On Us.’ Well, who is ‘us’? Is ‘us’ excluding survivors? Or rapists?” It’s easy for people to absolve themselves of responsibility, she said—people think of rapists as shadowy boogeymen, not people they might encounter in real life, much less be friends with, or even be themselves. How about “It’s on us to ask for consent” as a slogan, suggests Wanjuki, to impress upon people that it’s not just their responsibility to intervene, but also not to rape? And in the case of serial predators, which most rapists are, bystander intervention might only deflect their attentions onto a different victim and not actually stop them from raping.

Still, Dunn said, “Anytime you have an institution of power shining a spotlight, it does have an effect.” That goes for both the White House and the United Nations, although the UN “has been thinking about violence against women on a bigger level than our country in so many ways,” she said. The United States has yet to ratify a major international agreement on women’s rights, and while other countries commonly give women a private cause of action to sue for sexual assault, it was declared unconstitutional in the United States’ landmark Violence Against Women Act.

The White House has been taking plenty of policy action against sexual assault in addition to conducting awareness campaigns. There was the Dear Colleague letter in 2011, and also the launch of a new sexual assault task force this year, complete with a report including guidance for schools called Not Alone. The administration is releasing additional guidance as well as $6 million in grants from the Department of Justice in the wake of the It’s On Us announcement, and the Department of Education has a long list of schools under investigation for Title IX violations. Dunn most wants to see the administration focus on enforcement, since it’s what the federal government has the most power to do.

“Not alone,” as a phrase rather than a program, may be the most succinct summary of how things are changing for victims of gender-based violence and oppression, and what advocates are pushing for. Victims are coming out of the shadows, women are making their voices heard, and men are saying enough is enough.

“The public is ready for us,” Dunn said. “They see it, there’s no question that it’s happening, they’re outraged, and they’re asking, ‘What do I do, how do I get involved?’”