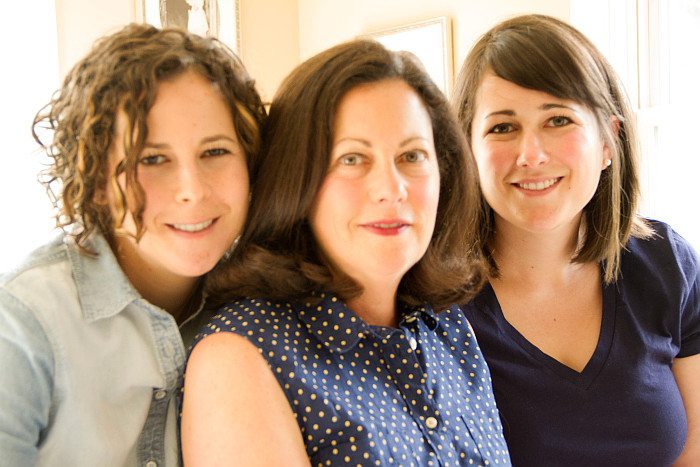 Founders of Not Alone: (from left to right) Brett, Sherry, and Beth Matusoff Merfish Beth Merfish

When Beth prepared to leave for college, her mother told her about her abortion, which she had in 1972 as a 20-year-old in Austin, Texas. (She had told her older daughter before Brett left for college two years earlier.) Years later, all three women sat in the gallery of the Texas state senate building during Wendy Davis’s 11-hour speech aimed at filibustering legislation seeking to limit abortions after 20 weeks and impose new regulations that would leave just a few abortion clinics open in the state. Angry and frustrated about the passage of HB 2, as well as the trend in anti-choice legislation nationwide, Beth, now 31, wrote a New York Times op-ed urging women to tell their abortion stories in the name of breaking down stigma and shame. “You have the power to cement in the minds of your communities and families the importance of reproductive freedom,” she wrote.

In response to the outpouring of stories that they received in response to Beth’s piece, the three women founded Not Alone in the summer of 2013. The project aims to change the current climate around abortion stigma by encouraging women to tell their abortion stories in videos uploaded to YouTube.

In July, Rewire spoke with Beth Matusoff Merfish on the phone about the organization she co-founded and the importance of storytelling in the reproductive rights movement.

Rewire: What makes Not Alone different from other organizations that encourage folks to tell their abortion stories?

Beth Matusoff Merfish: Our emphasis is on video—it’s a higher threshold way of telling a story. There’s no anonymity. When Emily [Letts, who filmed her own abortion earlier this year] posted her video, you had to stare into her eyes, you had to face her. Doing that makes it more difficult to judge her.

We have the same goal as the existing campaigns; we want to join with them, reach new audiences, continue the work of affecting the culture around abortion and the stigma that quiets women. The more voices we have, the better.

Rewire: How does Not Alone combat abortion stigma?

BMM: Women who get abortions are painted as caricatures—uneducated, irresponsible—when in reality none of those things are true.

All women make choices about their reproductive health, but stigma around abortion make us think that having an abortion will leave you entirely alone, that you’ll be the only one. It’s a really mean trick by the right. We hope people will look at the videos, at the diverse submission group, and see someone who looks and sounds like them, because abortion stories are diverse.

The assumption is that these campaigns are apolitical, that it’s a self-help project—if by self-help, you mean helping all women. Not Alone is a 501(c)(4); there is a political goal here. Our representatives need to hear that we want to change the status quo around reproductive rights.

Rewire: Can you talk about your personal experiences with abortion stigma?

BMM: My mom told us her abortion story so we wouldn’t feel alone, the way she did, if we ever made the same choice. It shocked me that she felt alone, because she was always surrounded by community. She had this intense fear of stigma, that telling people about her abortion would cause fractures in her relationship, she didn’t know how they would react. The fact that she felt stigmatized really had an impact on me, it gave me a whole new perspective.

Rewire: What do you think about the idea that every person who has had an abortion should tell their story?

BMM: My mother, sister, and I went to hear Rachel Maddow speak in Austin, and she said something that really inspired me: If you’re able to share an experience that was once shrouded in shame, you can do that because someone did it before you did; they took risks.

Maybe you’re not ready to make a video for Not Alone, but you might be feeling ready to tell someone in your life, and you end up seeing a video that gives you language to talk about your own story.

When you upload a video for Not Alone on YouTube, we make a donation to Provide, an organization that seeks to fill gaps in abortion access through work with local partners and within the health-care systems, so that we can also help ensure that women can have access to abortion providers. We want everyone who makes a video to know that we appreciate their bravery and sharing so much.

Rewire: What do you think about the idea that there’s a “right” kind of abortion or abortion story?

BMM: As someone who’s pro-choice, I think there’s this inclination to only want to hear stories from women who don’t feel traumatized, who don’t have regrets, because the right would have you believe that women who have abortions regret them every single day. On the site, we mediate videos, and we have gotten pre-made videos from the right, although I expected more. The truth is that abortion stories are three-dimensional, because we live full lives, and everyone has a different relationship with their reproductive health. The more kinds of stories, the more authentic the representation, the more likely it will be that people can go on the site and find someone that reminds them of their mom, sister, or themselves. I want these stories to do what I know they can do, which is open people’s minds. We have to push ourselves to find communities, and move beyond fear.

Rewire: I’m thinking also of the commonly seen, very “palatable” portrait of a woman who has an abortion: She’s white, wealthy, married, educated, she already has a child, and she was pregnant with a very wanted child when she learned it had a fetal anomaly.

BMM: There are a lot of compelling stories of choice; they all have their places, and they should all be told. I think when someone talks about why they chose abortion, people move to judgment if they don’t recognize her choices or her circumstances:  “She’s not educated,” “She didn’t use birth control,” “I bet everyone in her family has had an abortion.”

This woman you’re talking about is in an impossible situation. Sympathy and empathy, not judgment, allow more stories to be told, and that makes the issue no longer abstract. That changes the culture.

This interview was lightly edited for length and clarity.