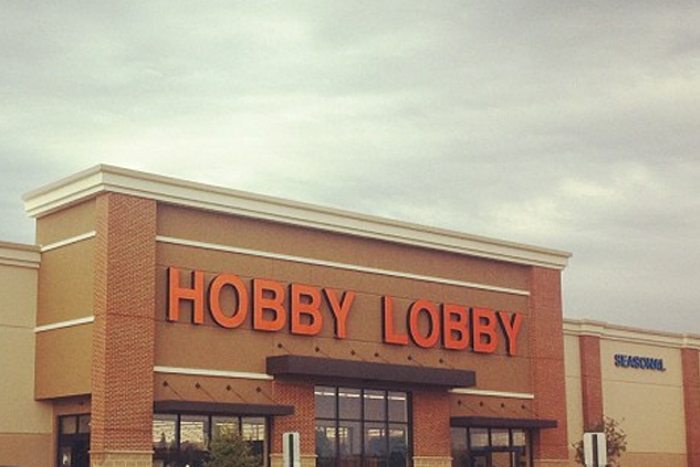 Though the multibillion-dollar, nearly 600-store chain took its legal claim against the federal government all the way to the Supreme Court when it didn’t want to honor the health insurance requirements of the Affordable Care Act, the company forbids its employees from seeking justice in the court of law. DerekTGreen/flickr

When a very pregnant Felicia Allen applied for medical leave from her job at Hobby Lobby three years ago, one might think that the company best known for denying its employees insurance coverage of certain contraceptives—on the false grounds that they cause abortions—would show equal concern for helping one of its employees when she learned she was pregnant.

Instead, Allen says the self-professed evangelical Christian arts-and-crafts chain fired her and then tried to prevent her from accessing unemployment benefits.

“They didn’t even want me to come back after having my baby, to provide for it,” she says.

Her allegations—as well as those brought by other former Hobby Lobby employees—call into question the company’s public claims when it comes to protecting life and operating its business with Christian values. Additionally, they highlight a practice by which Hobby Lobby prevents its employees from seeking justice through the courts.

In a phone interview with Rewire, Allen, now 32, said she was stunned when her supervisor at the Hobby Lobby store in Flowood, Mississippi, told her she would be terminated for taking unpaid time off to have her baby.

Allen had been hired as a part-time cashier in late July 2010. Shortly after starting the job, she learned she was four months’ pregnant with her third child. Because she had not been working for very long, Allen did not qualify for leave under the federal Family Medical Leave Act, which is what she said the Oklahoma City-based chain offers for maternity leave. Nervous, Allen went to her supervisor.

“I asked her would I lose my job due to me being four months and only having five months before I have my child. She told me ‘no,’” Allen said. “I felt like everything was OK. I had talked to my boss, and she let me know that everything would be OK. I would still have my job.”

But five months later, when the time came to take her leave of absence, Allen says her supervisor told her she would be terminated but could reapply later on. She says she tried to come back to work three weeks after her child was born, to no avail.

“I was like, I can’t get fired,” Allen recalls. “She can’t terminate me because I have to go have my child. I started asking everybody on the job, ‘Can they do this?’ And even the assistant manager who had just got hired [said,] ‘No, that’s not right.’”

Hobby Lobby did not respond to multiple requests to tell its side of the story or to answer questions about its maternity leave and other company policies.

When Allen applied for unemployment benefits, she says Hobby Lobby’s corporate office gave the unemployment agency a false version of events, claiming she could have taken off personal leave but chose not to. In the end, Allen says she won her claim for unemployment benefits, but she felt she had been wrongly discriminated based on the fact that she was pregnant. In February 2012 she sued Hobby Lobby, but her lawsuit was swiftly dropped because, like most—if not all—Hobby Lobby employees, Allen had signed away her rights to sue the company.

Though the multibillion-dollar, nearly 600-store chain took its legal claim against the federal government all the way to the Supreme Court when it didn’t want to honor the health insurance requirements of the Affordable Care Act, the company forbids its employees from seeking justice in the court of law.

Allen had signed a binding arbitration agreement upon taking the job, though she says she doesn’t remember doing so. The agreement, which all Hobby Lobby employees are required to sign, forces employees to resolve legal disputes outside of court through a process known as arbitration.

Arbitration has many benefits: It is usually vastly cheaper than litigation, and often allows parties to stave off potential reputational damage by settling disputes in private.

Hobby Lobby is in the minority (albeit a growing minority) of corporations that require employees to sign binding arbitration agreements. These agreements are more commonly used by corporations in consumer product agreements.

In recent years, as more companies have favored employment arbitration over litigation, the practice has garnered widespread criticism as being less fair for employees. Companies like Hobby Lobby claim that arbitration is better for both parties because it tends to take less time and money, and usually employers are required to cover employees’ legal fees.

Alex Colvin, a professor of conflict resolution at Cornell University and an expert on employment arbitration, agrees that arbitration tends to be much shorter than litigation, which can drag out for years, but he says the system is unequal and disproportionately favors corporations. In a phone interview, he told Rewire that corporations generally institute an arbitration-only policy out of fear of widespread lawsuits and to keep information on disputes out of the public eye.

“I think it’s an interesting confluence here with Hobby Lobby being in the news with that big case, but if that were an employment case where an employee wanted to make a claim, we would never see that case at the Supreme Court because it would be stayed in arbitration,” Colvin said. “So, ironically, Hobby Lobby gets to go to the Supreme Court because they want to challenge this, but their own employees don’t get to go to court.”

He estimates that approximately 25 percent of corporations have mandatory employment arbitration policies. His 2011 empirical study on employment arbitration outcomes in the United States, published in the Journal of Empirical Legal Studies, found that the employee win rate (approximately 21 percent) and award amounts (median $36,500; mean $109,858) among more than 1,200 arbitration cases decided between 2003 and 2007 were significantly lower than the employee win rate and award amount among employment litigation trials.

Colvin says it’s common for lawyers that generally represent plaintiffs’ claims not to take arbitration cases because they’re harder to win and the awards tend to be smaller than in lawsuits. This rang true for Allen; her lawyers at Watson & Norris PLLC in Jackson, Mississippi, declined to pursue her arbitration case.

To be sure, Felicia Allen is only one among the thousands of employees who have worked for Hobby Lobby since the early 1970s, many of whom have likely worked for the company without issue. And, to be clear, it’s only her side of the story.

According to federal court records, over the years, several employees have filed job discrimination lawsuits against Hobby Lobby claiming age, disability, race, and sex discrimination—which is common for many corporations. But due to the fact that Hobby Lobby avoids lawsuits and the fact that little information about arbitration cases is made public, it’s difficult to evaluate the company’s treatment of its employees beyond its assurances that they are paid above minimum wage and well taken care of.

“Christians Are Not Free to Sue Other Christians”

One thing that sets apart Hobby Lobby’s arbitration policy from most corporations is its allowance for Christian-influenced arbitration. The mutual arbitration agreement Allen signed gives employees the option of choosing to find an arbitrator either through the nonprofit American Arbitration Association (AAA)—the largest dispute-resolution service provider in the United States—or the Institute for Christian Conciliation (ICC).

The latter is run by a Billings, Montana-based nonprofit called Peacemaker Ministries and administers “Christian conciliation,” which is a form of religious arbitration described on its website as “a process for reconciling people and resolving disputes out of court in a biblical manner.” It’s a type of conflict resolution geared toward churches and Christian organizations. (Jewish and Muslim organizations use similar types of religious arbitration to handle disputes.)

Among the principles that drive Peacemaker Ministries is the idea that:

Generally, Christians are not free to sue other Christians, at least not until they have exhausted the process that Jesus sets forth in Matthew 18:15-20 and 1 Corinthians 6:1-8. God instructs Christians to resolve their disputes within the church itself, with the assistance of other Christians if necessary.

Allen, who now has four children and works at Xerox while pursuing an associate’s degree in accounting, says she was never aware that she could pursue arbitration—neither the secular nor the Christian kind.

And despite the outwardly Christian appearance of the Green family, which owns Hobby Lobby and is currently attempting to build a bible museum in the nation’s capital, Allen says she did not witness many acts of Christianity at her store or from her corporate managers.

“How can you be Christian and lie about something to hinder your employee or don’t want them to come back after they’ve had their baby?” Allen said. “Or you’re taking up for your manager knowing that they had done the wrong thing. I feel like that’s not being Christian at all. That’s why I don’t even shop there anymore. I used to shop at that store all the time.”