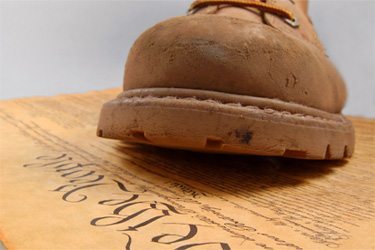 The latest wave of clinic closures in Texas illustrates how absurd judging abortion restrictions under the "undue burden" test has become. Boot of oppression stepping on the U.S. Constitution via Shutterstock

In the four months since the Roberts Court refused to block a U.S. Fifth Circuit Court of Appeals decision to allow the admitting privileges portion of HB 2, the massive Texas anti-abortion omnibus bill, to take effect while its legal challenge proceeded, at least 19 abortion clinics in the state have closed, including the last abortion clinic between Houston, Texas, and the Louisiana border, as well as the last abortion clinic in the economically depressed Rio Grande Valley, leaving a 400-mile stretch in the state where the poorest Texans have no access to reproductive health care.

The very real human rights crisis unfolding in Texas sets the scene for legal arguments around the latest wave of anti-abortion restrictions that are at once both critically important and patently absurd. At the core of those arguments is a question, deceptively simple, that could permanently shift the direction of abortion rights jurisprudence: Does having to travel hundreds of miles away to access reproductive health care create an undue burden on abortion rights?

Objectively it’s impossible to answer that question, but in any other context, the idea that a patient must travel hundreds of miles, sometimes out of state, simply to access a doctor is by its very nature unduly burdensome. Then again, we’re talking about accessing abortion, and more specifically accessing abortion in Texas under the U.S. Fifth Circuit Court of Appeals, which is anything but objective when it comes to abortion rights. After all, in January, when the Fifth Circuit heard arguments to reinstate the lower court order blocking a provision of HB 2 while the legal challenge went forward, Judge Edith Jones quipped whether the “peculiarly flat and not congested highway” that connects the Rio Grande Valley to San Antonio helped or hurt the argument that a law that intentionally created hundreds of miles between abortion clinics unduly burdened abortion rights. On the one hand, Jones and the other judges speculated, the flat open highways were conducive to fast driving, so the distance might not be so bad. On the other hand, cutting off abortion access to enormous portions of the state would affect the state’s most impoverished and at-risk populations—an undue burden on those women’s rights, sure, but that alone isn’t enough to strike a law as unconstitutional.

How have we gotten to this point—where the question of whether 400 miles between providers or closing a state’s only abortion clinic is considered a serious legal question, and not simply absurd? How can it be that anti-choice activists loudly and proudly announce their legislative intention to re-criminalize abortion and courts continue to turn a blind eye to this overtly political agenda that brazenly defies the Constitution? In a recent article in the Harvard Law Review, professor Caitlin Borgmann rightly argues that this depressing state of abortion rights law is thanks in large part to a double standard developed and nurtured by the federal courts in evaluating abortion restrictions that demands challengers put forward often impossible evidentiary proof that a restriction will cause immediate harm, while giving lawmakers a free pass in supporting the supposed government interest in severely regulating a fundamental constitutional right. More critically, Borgmann argues, until the federal courts are willing to actually question lawmakers on their evidence and their intentions, there’s no reason to think the state of abortion rights jurisprudence will improve anytime soon.

As Borgmann explains, the problem is two-fold. First, under the undue burden standard, courts must first decide whether a law has the purpose of placing a substantial obstacle before women seeking abortions. The second prong of the undue burden test has courts decide whether the restrictions have the effect of placing a substantial obstacle in the path of women seeking abortions. According to Borgmann, the courts’ conclusions are then by their nature subjective. “[T]hat question inevitably depends on variables including the number and distribution of providers in a given state, and individual judge’s views of what constitutes a ‘substantial obstacle,'” she writes. Contrast that with the ridiculously easy burden placed on state legislators to prove their restrictions have merit—the lowest possible rationale basis test that simply requires lawmakers be able to show they had a “rational basis to act“—and the court will presume an abortion restriction is valid.

But if anti-choice activists are clear their goal is to place substantial obstacles in the place of women seeking abortions, why do the federal courts ignore this evidence and essentially skip over this line of inquiry? One reason is because, as Borgmann argues, it’s become practically impossible for anyone challenging abortion restrictions to meet this “substantial obstacle.” For proof, Borgmann points to Mazurek v. Armstrong, a Supreme Court decision that upheld a law permitting only physicians to perform abortions. In that case, the Supreme Court rejected, as insufficient proof of a purpose to place a substantial obstacle in the way of abortion access, the fact that an anti-abortion rights group drafted the law and that no evidence supported its patient safety rationale.

If anti-choice advocates’ admissions that their restrictions are designed to substantially deter, if not eliminate altogether, abortion access, and legislators are not required to defend their bills with actual evidence, then whose interests are the federal courts serving?

One of the enduring criticisms of the Roe v. Wade decision is that it over-medicalized abortion, empowering doctors rather than women, by grounding much of the rationale for the opinion in a paternalism that remains a permanent fixture in the abortion debate today. For example, look at the successes by the same-sex marriage campaign in the conservative federal courts that also are upholding abortion restrictions. The successes in the marriage equality campaign came about in large part because advocates took head on the claims and phony evidence that same-sex marriages harms children and families. And, more importantly, the federal courts believed them.

Thanks to the federal courts’ unwillingness to require lawmakers to put forward defensible evidence in support of abortion restrictions, the post-Roe landscape of abortion access looks eerily like the pre-Roe landscape, with a checkerboard of access increasingly concentrated in urban and coastal areas, and overlapping restrictions adding additional time and costs to access care. Thanks to the success of anti-choice activists in pushing the limit of the undue burden standard, anti-choice activists have largely succeeded in making safe, legal abortion access practically impossible for most women in this country.

Borgmann argues that the battle over admitting privileges laws and clinic closures may mark the turning point in the push to render abortion rights meaningless by perpetuating a thousand individual “undue burdens”—there’s evidence even the federal judiciary may have reached a limit in just how much leniency it is willing to grant anti-choice lawmakers. Borgmann may be right, and we may be witnessing the beginning of the end of the federal courts’ enabling of the historic assault on women’s rights. But for too many in this country, it’s a hollow victory of too little, too late.