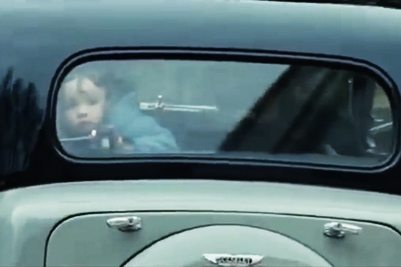 Philomena is another reminder of the vast inequalities between those who adopt children and birth mothers. JoBlo.com / YouTube

Philomena, starring Judi Dench and directed by Stephen Frears, received four Oscar nominations last week. The film is based on a true story chronicled in Martin Sixsmith’s 2009 book The Lost Child of Philomena Lee: A Mother, Her Son, and a Fifty-Year Search. Captured is a little known piece of adoption history—the forcible removal of Irish children from their unwed mothers and then adoption by U.S. families. This extraordinary story illustrates the grave injustices of the Magdalene Laundries that were operated under the authority of the Catholic Church. Irish girls and women were forced into slave labor, working long hours cleaning in the laundries. The labor took place in hot, crowded, and generally miserable conditions.

The slavery that took place resulted in a recent legal agreement: The Irish government will now pay €58 million (nearly $79 million) to hundreds of the Magdalene Laundry survivors. Many of the survivors were adolescent girls who were sent to work while pregnant—sent to the Catholic sisters for repentance and remediation. The atrocities were such that Ireland’s prime minister, Enda Kenny, made an emotional apology. “Choking back tears,” he said, “This is a national shame, for which I again say, I am deeply sorry and offer my full and heartfelt apologies.” To date, no such apology or financial settlement has yet to be made by the Catholic Church.

As the film adaptation of Philomena documents, the forced labor in the laundries was deemed necessary to pay for room and board as well as other expenses, such as the medical costs of childbirth. Because the documentation was poor and much of it was intentionally destroyed by the guilty nuns—who set fire to some of the records—various facts have been conveniently lost. As a result, the absolute numbers of children sent into illegal adoptions within and from Ireland to the United States and elsewhere is unknown today. However, the evidence is damning, as Magdalene survivors seek justice and document their histories, including their humiliating living conditions. Part of that evidence is being preserved historically while grave markers document the young women who did not survive the harsh treatment of slavery, poor medical care, and heartbreak of forced child removal and adoptions.

Philomena captures how force and fraud interfaced in illicit adoptions from Ireland to the United States, and this is just the tip of the iceberg. Spain also has a scandal of child sales into adoption, orchestrated by members of the Catholic Church. Some of these Spanish children were also destined to the United States, and search and reunions are taking place in a handful of cases. In the case of Philomena, the main character’s reunion with her lost son has several twists that create suspense. Then there is the sadness of lost love, and it is undeniable.

Philomena is another reminder of the vast inequalities between those who adopt children and birth mothers. Globally, this is a largely untold story in which some birth mothers have been exploited for reasons of poverty, social exclusion, and stigma. This has been true in South Korea, India, Guatemala, El Salvador, and elsewhere, using a variety of child abduction techniques, and the consequences have been profound.

As Philomena illustrates, child abduction takes on many forms, and often those involved in the crime present themselves as “saviors” who are above reproach. Almost always those involved in the illicit practices are financially enriched while receiving applause for the “rescue” of a child. All the while, the birth families are left behind mourning for their loss and, in time, many adoptees as well as birth mothers begin a search. In doing so, they risk intensifying the sense of loss, or they may benefit from ultimately “knowing.”

Even if one has not been personally touched by adoption, the story captures the theme of rebirth of the human spirit, contrasted against the entrapments of daily living in which deeper satisfactions are often overlooked. The film also looks at cynicism versus humor; taking a positive approach to living is most certainly a theme of Philomena. While some may dismiss this as just another feel-good movie, the contrasts and contradictions keep the story real in its intensity.

Audiences are presented with a complicated and true story, told elegantly, while exposing the imperfections of the human experience. Philomena is transnational, adding a dimension of a culture lost, and a birth mother’s yearning to understand the differences while unconditionally accepting the results of her search. Human emotion and the need to reconcile are presented head-on. It is impossible for the audience to leave unaffected. Fundamentally, the act of forgiveness is profound—presenting a clearly developed story line about the challenge of acceptance versus justice that inevitably emerges in the truth and reconciliation of past human rights abuses.

Surprisingly, you will laugh before you cry, and both emotions are well warranted. The networks of social relationships are astonishing, reminding the audience of just how close we may be to someone we have lost and yearn to find. Dench’s character in Philomena is a portrait of how finding happiness and acceptance is very much in how you look at life.

Moviegoers will be left to think more about healing and reproductive injustices of the past, underscoring the mean-spiritedness of some who stand in moral judgment of others. And then there is greed—another dimension of the illicit behaviors and practices of those who have scripted these crimes. Philomena boasts a superb cast supporting Dench.

For more information about the Magdalene Laundries, there are a variety of sources online documenting the lives of women who suffered and survived, as well as those who are deceased; oral histories, photographs, and other artifacts are being collected and appropriate ways in which to honor the women are being considered in terms of museums and other celebrations of their lives and losses. Also, other countries are now investigating their own laundries and survivors, as is the case in Australia. In sum, an astounding social movement for truth and justice is clearly underway, and one way to honor the laundry survivors is hearing their stories. For the act of witnessing is sometimes the only thing that we can do as the story unfolds.

Philomena will be available on DVD March 4.