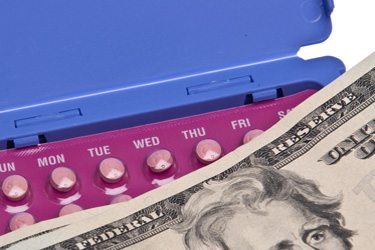 Lawsuits by Hobby Lobby and Conestoga Wood challenge the contraceptive coverage requirement under the Affordable Care Act, which says that certain preventive health-care services like contraception must be covered without copay or cost sharing. Birth control money via Shutterstock

Correction: This article has been updated to clarify the fact that Little Sisters employees cannot, in practice, go directly to an insurance company to get contraception coverage, because the insurance plan available to those employees also does not cover contraception.

The latest twist in the battle over the Affordable Care Act’s contraception mandate made headlines last week, when Justice Sonia Sotomayor issued a temporary injunction for a small number of Catholic nonprofits who have a quarrel with the way the government allows them to exempt themselves from offering insurance plans that cover contraception. The injunction itself is not a big deal—Sotomayor may be preserving the status quo until the case gets a chance to be heard in court—but the case itself is incredibly important. Even more than the larger Hobby Lobby case regarding for-profit companies trying to use religion to weasel out of minimum compensation standards set by the government, this case shows how little the fight against the contraception mandate is about “religious freedom” and how much it is really about the Christian right trying to establish an employer’s “right” to control your private sex life.

See, the groups that are suing, including the Little Sisters of the Poor, cannot argue that the government is forcing them to “pay” for contraception and not just because those health-care plans actually belong to the employees, who earned them as they earned their paychecks through working. Worse: The health-care reform law completely exempts the Little Sisters and other such nonprofits from offering their employees plans that cover contraception. In such cases, organizations like the Little Sisters fill out a self-certification as a religiously affiliated organization, and voila! They don’t have to offer contraceptive coverage directly through their health insurance plans. But this case goes further. In other such cases, women employed by religiously affiliated organizations that refuse insurance coverage for contraception would be offered coverage directly by an insurance company with no payment or involvement by their employer. In this case, however, the sisters’ insurer, Christian Bros., also is a religiously affiliated organization, so there is no avenue for these women to get insurance coverage for contraception. They must instead pay out-of-pocket. So really, the lawsuit is purely to establish the principle that employers shouldn’t have to free their employees to get contraception coverage elsewhere.

So what are the nuns doing? Refusing to sign the paperwork. You know, the paperwork that exempts them from having to spend a single dime of their organization’s money on a compensation package that explicitly covers contraception. Why? Because signing that paperwork allows their employees to get the coverage elsewhere, and, they claim, that makes them complicit in the great evil that is contraception, a preventive measure used by 99 percent of women.

At this point, it’s worth pointing out that their employees can spend their paychecks on contraception. Which means that a dollar that has touched the Little Sisters account and passed on to an employee has likely been spent on a condom. There’s no way around it. Paying their employees makes them more “complicit” with contraception than signing a piece of paper that allows them not to pay for health plans that cover contraception. The notion that an employer gets to have a moral vote in what your health insurance covers but not in what your paycheck covers has always been logically inconsistent, and this lawsuit really exposes how true that is.

By not signing the paperwork, which would give its employees an opportunity to get contraception coverage elsewhere, the Little Sisters is making it exquisitely clear that this is not and has never been about being “complicit” or “paying for” contraception. It’s about the Christian right using every lever they can pull to make it harder for women to obtain contraception at all. It’s a mentality that sees every unintended and forced pregnancy as a moral victory over the forces of feminism, which leads to a world where they’re willing to go great distances just to make it harder for even a small number of women to prevent unintended pregnancy.

It’s also about employers demanding a shocking amount of control over what you do in your own private life. I cannot reiterate this enough: The Little Sisters refuses to sign paperwork that frees its employees to get contraception coverage elsewhere. “Frees” is the operative word here. The nuns may claim they are doing this for “religious freedom,” but in reality, they are doing the opposite, looking for as many ways as possible to use their power as employers to strip their employees of freedom to make their own choices outside of work about sexuality and health.

This is not just a feminist issue or a women’s issue or a reproductive rights issue. If these lawsuits are successful, that creates a massive precedent for the argument that employees should be expected to give up personal freedoms in order to adhere to their boss’ religious beliefs. Not only is that a form of religious discrimination against employees who disagree with their bosses on these issues, it’s a way to create two classes of Americans: those who are bosses and, therefore, free to make their own religious and personal choices, and the rest of us. It sets up the claim that in order for the wealthy and privileged who do most of the hiring in the country to be “free,” the rest of us have to give up our freedoms. It’s downright Orwellian, an attempt to redefine “freedom” to mean “an inability of people who need to work for a living to make their own choices.”

Not that any of this is surprising. Throughout conservative history, the second one government entity stops oppressing people and instead starts to protect their rights, conservatives look to other government entities—or private employers—to start stripping those rights away again. That’s why they yell “states rights” whenever they want a state to have a right to take away freedoms the federal government is interested in protecting. And now that women look like they might have more freedom to choose when and how they get pregnant, conservatives are declaring that employers have a right to take that freedom away. The end goal is always about ending individual freedoms, especially for traditionally oppressed classes. This lawsuit just shows how true that really is.