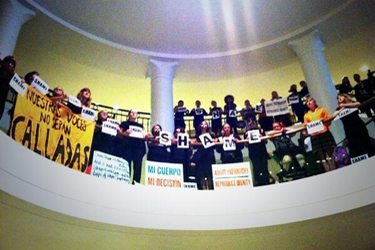 Was it true belief, absolute ignorance, or ruthless political opportunism that caused Texas legislators to decimate the state's family planning safety net and, as the numbers now show, wrest reproductive autonomy out of the hands of tens of thousands of Texans? NARAL Pro-Choice TX / Twitter

True belief, absolute ignorance, or ruthless political opportunism: Which of these three things has caused Texas legislators, over the past two years, to deliberately enact policies that have ensured—no, engineered—a future in which Texans grow sicker instead of healthier, poorer instead of more financially stable, ever more helpless instead of empowered and enfranchised?

The data, the statistics, and the reports are now coming in. Projections and warnings have become documented consequences. The Department of State Health Services (DSHS) reported last month that state-funded family planning providers—a group that no longer includes Planned Parenthood, much to the pleasure of Republican Gov. Rick Perry and his allies—are now serving 77 percent fewer clients at an increased cost of 17 percent more per client, than they were three years ago.

Indeed, public family planning programs in Texas appear to be in full tailspin. State legislators have tried to save the floundering Texas Women’s Health Program with a Sammy Kershaw concert. Meanwhile, a report released by the National Latina Institute for Reproductive Health and the Center for Reproductive Rights, surveying residents of Texas’ Rio Grande Valley, illustrates the real-world impact of these cuts and puts faces and names to the numbers, recounting the stories of Texans who no longer know where they will go for pap smears or birth control pills.

This decimation of low-income Texans’ access to affordable or free health care, which once allowed our most marginalized and vulnerable residents some degree of reproductive autonomy, is not something that happened. It is something that state legislators and elected officials did. Purposefully and, according to not a few of them, with God’s blessing. Their proud achievements:

The cumulative effect of these efforts has been to break a reproductive health-care delivery system that not only worked, but worked well and cost-effectively. As a result, Texas lawmakers—notably, Republicans like state Sens. Jane Nelson, Dan Patrick, and Bob Deuell and conservative, anti-choice Democrats like state Sen. Eddie Lucio Jr.—have deliberately taken reproductive autonomy out of the hands of the least enfranchised Texans and put them at the mercy of federal judges, state bureaucrats, and state elected officials’ own political aspirations.

You might not know this if you follow, for example, coverage from the Texas Tribune, which published a now-updated puff piece on Tuesday about Sen. Nelson and her efforts to “further expand” women’s health care in Texas, as if Nelson had always been leading the charge for contraception and cancer screenings in the state.

In its initially published form, Becca Aaronson’s piece wholly neglected to mention that Sen. Nelson herself was one of the legislators who personally engineered the 2011 budget cuts. Here’s Nelson’s signature on the conference committee report. (About an hour or so after it went online, the Tribune updated the article in response to Twitter users, including myself, crying foul about their revisionist narrative.)

Indeed, the initially published Tribune piece merely referenced “the Legislature’s 2011 decisions to cut two-thirds of family planning financing,” as if “the legislature” were some mysterious foreign body, agent and accountable unto itself. It credulously leads: “Sen. Jane Nelson believes there’s even greater capacity for the state to expand women’s health services.” Well golly, and she ought to know! Nelson herself, along with her conservative and Republican colleagues, was instrumental in cutting family planning health services in the first place.

We cannot afford this kind of institutional memory wipe—one wonders how long Nelson’s role in slashing Texas’ family planning budget would have remained obscured in that Trib piece, were it not for Twitter—if we are to prevent further damage in the future. We must remember, it is incumbent on us to remember how harm was done, how deliberately it was done, and how self-righteously it was done.

Two years ago, Texas had a family planning safety net that was far from perfect, and far from addressing the totality of the state’s needs, but it worked, and it was getting better all the time: Enrollment in the state’s family planning program was on the rise, while the Medicaid Women’s Health Program saved taxpayers millions and provided contraception and cancer screenings for an ever-growing number of Texans. In 2011, the number of abortions in the state hit its lowest point in a decade, which, if anti-choice conservatives are to be believed, has long been their goal.

But then came the Tea Party, and an increasingly wheels-off governor hell-bent on taking a hard right turn all the way to the White House. Legislators frothed over the prospect of staking out the highest point on the “pro-life” hill, outdoing themselves to be the most opposed to Planned Parenthood, the biggest enemy of the federal government. Gleefully, Texas Republicans sneered at cost-saving contraceptive programs and clutched every available pearl at the prospect of providing medically sound sex education to the state’s schoolchildren.

Today the evidence shows, increasingly, that this political peacocking has put the poorest Texans in real danger.

As a public health issue, family planning is almost as clear a case of cause and effect as any sentient being could ask for. Less money for family planning providers means fewer family planning providers serving fewer low-income clients who will receive less, and less frequently affordable, birth control and pap smears. Which means more unplanned pregnancy and more undiagnosed cancers, leading to more Medicaid-funded births, a higher demand for abortion, and, when cancer goes undiagnosed, more terminal illness.

I know these things are beyond obvious. Even writing them out this way approaches downright absurdity. But I think these things need to be laid out, if we are to understand the almost unimaginable cruelty and selfishness of the Texas legislators who deliberately engineered the destruction of the family planning safety net in our state.

The consequences of these bad laws and egregious policies are life and death: more cancer, more unplanned pregnancy, more unsafe abortion, more desperation and powerlessness. Reproductive autonomy snatched, intentionally and swiftly, out of the hands of people who had been told, just two and three years ago, that the state would help them access the health-care resources they needed to build healthy, planned families.

Which brings us to those three options I mentioned above: was it true belief, absolute ignorance, or ruthless political opportunism that caused Texas legislators—conservative ones, mostly with (R)s next to their names, though not always—to put their own constituents in such dire straits?

Certainly there are, in the wilds of the Texas anti-choice landscape, some true believers who genuinely think birth control is a tool of Satan, that Planned Parenthood is secretly herding thousands of pregnant 13-year-olds into underground abortion mills, and that it is a loving God’s honest will that all pregnant Texans should give birth or die trying.

One or two of those true believers may even be legislators. And while true belief might impede someone from coming to the logical, one might even say elementary, conclusion that less contraception equals more unplanned pregnancy, true belief is rare. What is more common: privilege, complacency, self-absorption, and willful ignorance.

Are we to believe that conservative legislators like Bob Deuell—a medical doctor!—truly can’t draw a line from point A to point B and see that requiring multi-million-dollar physical plant changes to abortion facilities will force many to close? Are we to believe that the legislators who, in 2011, voted to take contraception and cancer screenings away from hundreds of thousands of Texans, couldn’t imagine a future in which those Texans were sicker and facing more unplanned pregnancies?

Which leaves a third option: that elected officials who refused to see past the next primary election caused deliberate harm to the most marginalized Texans because they thought they wouldn’t be held accountable for their actions, and indeed, believed that they would gain the respect of their most conservative constituents. If that meant taking health care away from poor Texans—and they must have known that cutting family planning funds and dismantling low-income health care resources would mean precisely that—it was a price they were willing to pay to keep their offices in our beautiful pink granite capitol building.

It is one thing to differ on long-game political, social, and economic theories and methods, and it is another to take intentional steps to disenfranchise, weaken, and yes, even kill, the poorest among us. What we are seeing now are the logical consequences to intentionally harmful laws, public health policies, and budget cuts that manifest measurably and quickly. The scope of the damage that conservative legislators have knowingly done to Texans in the service of nothing more than their own political careers is mind-boggling.

These are consequences that legislators were warned about, but they are consequences any thinking person wouldn’t need to be warned of in the first place, which makes the last few years of Texas politics all the more maddening. The numbers now show, irrefutably, that tens of thousands of Texans—more and more of them every month—are losing access to contraception and cancer screenings.

What we have learned, from the 2011 and 2013 legislative sessions in Texas, is that we cannot rely on the majority of our conservative elected officials not to do deliberate harm. If that doesn’t scare the shit out of you, if it doesn’t send you screaming into the streets—or into the state capitol building on a hot July night—I don’t know what would.