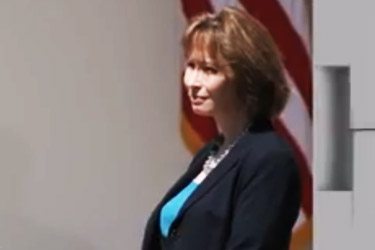 The vote is the fist since Senate Democrats reformed filibuster rules and marks the beginning of a push back against Republican obstructionism. WochitGeneralNews / YouTube

On Tuesday, by a vote of 56 to 38, the Senate confirmed the nomination of Patricia Ann Millett to the D.C. Circuit Court of Appeals. Millett, a seasoned Supreme Court litigator, will fill one of three current vacancies on the court and is the first judicial nominee confirmed since Senate Democrats reformed Senate rules and eliminated the filibuster for non-Supreme Court level judicial nominees. Millett’s confirmation makes her the sixth woman to sit on the D.C. Circuit Court of Appeals.

In November, Republicans filibustered Millett’s nomination, along with the nominations of Nina Pillard and Robert Wilkins, as conservatives tried desperately to hold on to an ideological advantage on what many believe to be the second most powerful court in the country. All three nominees enjoyed a support of a majority of senators and broad bipartisan support in the legal community, but none were able to clear the 60-vote filibuster threshold to have their nominations advance. Senate Majority Leader Harry Reid (D-NV) has not yet scheduled a vote on the Pillard or Wilkins nominations, but both are expected to be confirmed now that the filibuster has been reformed.

During his time in office, President Obama has only placed one judge on the D.C. Circuit. Sri Srinivasan was unanimously confirmed by the Senate in May, making him the first new judge on the court since 2006. And in March, the White House withdrew the nomination of Caitlin Halligan for the D.C. Circuit Court after anti-choice groups joined forces with the National Rifle Association to pressure Republicans to block her nomination. The confirmation of Millett, Pillard, and Wilkins would shift the roster of active judges on the D.C. Circuit Court of Appeals from an even split of four Republican appointees and four Democratic appointees to a 7-4 advantage for Democrats. But Republican-appointed judges would still maintain their 9-8 advantage when senior judges, those who still sit on panels to hear cases and write opinions, are counted.

Senate Democrats had threatened to reform the filibuster in the past but had never moved on the threat despite ongoing and escalating Republican obstructionism. But, according to the New York Times, it was a series of federal court decisions upholding attacks on reproductive rights followed by the first Millett filibuster that changed Democrats’ minds. Sen. Jeff Merkley (D-OR) told the Times that was the “final tipping point” that “constituted an attack on the balance and integrity of our courts.”

Marge Baker, executive vice president of People for the American Way, responded to the Millett nomination with a similar sentiment. “Finally, we are seeing progress in filling the three vacancies on the D.C. Circuit. There is no doubt that Patricia Millett and the other two nominees to this court—Nina Pillard and Robert Wilkins—are eminently qualified,” she said. “The Republican opposition to these nominees has not been about their merits, but simply about keeping the president from filling these seats with any nominees. Millett will fill a seat that has been vacant since Chief Justice John Roberts was elevated to the Supreme Court in 2005. It’s about time this blockade was broken.”

The vote on the Millett nomination represents the opening of a logjam of presidential nominees, both judiciary and administrative. In addition to Millett’s nomination, the Senate was also advancing the nomination of Rep. Melvin Watt to the Federal Housing Finance Agency, while Sen. Reid filed for cloture on at least ten other judicial and agency appointments.   Only two Republican senators—Susan Collins (ME) and Lisa Murkowski (AK)—voted with Democrats to confirm Millett. Six senators did not vote, suggesting that while the Senate rule reform may get nominations moving again, the partisan battles over those nominees are far from over.

“To have so few Republican Senators vote to confirm this outstanding nominee is a deep disappointment on an otherwise welcome occasion, and underscores just how far the Senate has descended into rank partisanship,” said Constitutional Accountability Center Vice President Judith E. Schaeffer in a statement. “After months of needless delay by Senate Republicans, this overwhelmingly qualified and totally uncontroversial nominee is headed for service on the D.C. Circuit. Her sterling credentials should help provide much-needed balance to a bench that has produced some truly radical decisions in recent years.”