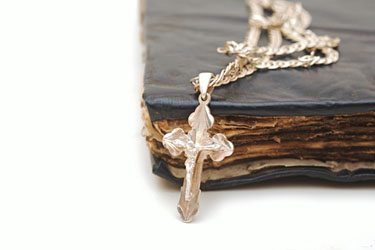 A new lawsuit claims Catholic-owned hospitals are negligent in treating pregnant people while the Roberts Court takes up two challenges to the contraception mandate. A cross with a chain via Shutterstock

In a first-of-its-kind lawsuit, a Michigan woman is suing the U.S. Conference of Catholic Bishops for negligence after the bishops repeatedly refused to treat her for her miscarriage. According to the complaint, the bishops’ anti-choice directives, which prohibit Catholic-owned and sponsored hospitals from performing abortions, are negligently affecting the medical care delivered to pregnant people. Regardless of the outcome of the lawsuit, at the very least it will bring some much-needed attention to the practices of Catholic-owned and -sponsored hospitals in routinely prioritizing fetal life over the life of pregnant people.

A Seventh Circuit Court of Appeals heard arguments in the legal challenge to Wisconsin’s admitting privileges law, while in Indiana a federal court blocked an Indiana targeted regulation of abortion providers (TRAP) law designed to close a Planned Parenthood facility in Lafayette.

It’s official: The Supreme Court will hear arguments in the constitutionality of the contraception mandate in the Affordable Care Act and answer whether or not corporations have religious exercise rights.

The State of New Jersey is going after the license of a rogue abortion provider it claims was practicing medicine without any medical malpractice insurance.

Annamarya Scaccia has the latest on Swarthmore College’s attempts to address chronic problems with the school’s sexual assault and harassment policies and practices.

Jessica Luther has this must-read on rape culture, football culture, and the lack of justice that exists when the two overlap.

The nonprofit Voice of Choice—which posts the names, photos, and contact information of anti-choice protestors online—is being sued for more than $40 million for invasion of privacy and defamation. The lawsuit, filed by 132 people, seeks class-action status, claiming the online posts have resulted in harassing calls, letters, and emails from Voice of Choice’s “minions.”

Yet another federal court confirms that if you want to do business, you don’t get to discriminate in the name of religion. Denver-based Masterpiece Cakeshop refused to make a wedding cake for a same-sex couple, but last week a federal court ordered the baker to “cease and desist” from discriminating against same-sex couples. A similar case is pending in Washington, where a florist is accused of refusing service for a same-sex wedding, while in August the New Mexico Supreme Court ruled that an Albuquerque photographer was wrong to decline to photograph a same-sex couple’s commitment ceremony.