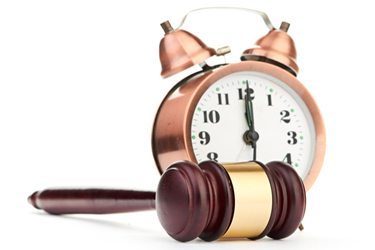 A pair of bills that would require abortion providers to obtain admitting privileges at a hospital within 30 miles of the clinics where they perform abortions are working their way through the Oklahoma legislature. Gavel and old clock via Shutterstock

Late Tuesday afternoon, the Supreme Court refused to intervene in the battle over HB 2, Texas’ massive omnibus anti-abortion law. The 5-4 ruling refusing to reinstate a lower court’s injunction blocking the hospital admitting privileges portion of the law not only lets that provision remain in effect, it sets the stage for a future battle over the question of just how much access to abortion services a state can cut off before rendering the right to abortion meaningless.

The ruling came in response to a November 4 emergency petition filed by abortion providers with Justice Antonin Scalia, asking him to temporarily block the Texas law while the case proceeds on appeal. On October 28, following a three-day trial, a district court permanently blocked the admitting privileges portion of the law. But on October 31, following an emergency request by Texas Attorney General Greg Abbott, the Fifth Circuit Court of Appeals allowed the law to take effect while the appeal continued. The Fifth Circuit is the only federal court to allow this kind of law to take effect. District courts in Alabama, Mississippi, Wisconsin, and North Dakota have all blocked similar laws.

While the likelihood of the Supreme Court stepping into the case this early was always slim, it did offer a snapshot of the Roberts Court’s first impression of the fight taking shape. Not surprisingly, the conservative majority who voted to let the law take effect included Justice Alito, along with Justice Thomas, who joined Justice Scalia in a combative concurring opinion that does the most to lay bare the judgment and disdain conservatives view those who need abortion care.

It’s not clear why Justice Scalia felt it necessary to pen a separate concurring opinion rejecting the application, or why Justices Kennedy and Roberts chose not to sign on with Scalia’s reasoning but presumably also voted to reject the case, but what follows from Scalia is not a justification of the decision to refrain from taking the case, but rather a direct attack on the justices who dared to dissent. “Reasonable minds can perhaps disagree about whether the Court of Appeals should have granted a stay in this case,” Scalia wrote. “But there is no doubt that the applicants have not carried their heavy burden of showing that doing so was a clear violation of accepted legal standards—which do not include a special ‘status quo’ standard for laws affecting abortion.”

The “status quo” that Justice Scalia refers to, and the key difference between the majority and dissenting justices in whether to intervene in the Texas dispute, is a belief as to who should bear the burden of the law going into effect if it is later determined to be unconstitutional. Because right now, at this stage in the fight, that is all the Court is really answering. The larger questions about the constitutionality of HB 2 will be sorted out in January. For Justices Scalia, Thomas, and Alito, pregnant Texans should bear that “heavy burden,” presumably because for these justices there is no burden too great to hoist on a person in need of abortion care.

But for Justices Breyer, Sotomayor, Kagan, and Ginsburg, the state should bear the burden because, on the balance of harms, it has far less to lose than Texans. “If the law is valid, then the District Court’s injunction harms the State by delaying for a few months a change to the longstanding status quo,” Breyer wrote. “If the law is invalid, the injunction properly prevented the potential for serious physical or other harm to many women whose exercise of their constitutional right to obtain an abortion would be unduly burdened by the law. And although the injunction will ultimately be reinstated if the law is indeed invalid, the harms to the individual women whose rights it restricts while it remains in effect will be permanent.”

The dissent also hones in on a key point underlying the fight over HB 2. Abortion opponents are able to accomplish through targeted clinic closures what they may not be able to do via judicial opinion: effectively overturn Roe v. Wade by rendering abortion impossible to access. “By putting Texas’ new law into immediate effect, it instantly leaves ’24 counties in the Rio Grande Valley … with no abortion provider because those providers do not have admitting privileges and are unlikely to to get them’ and it may substantially reduce access to safe abortions elsewhere in Texas,” Breyer wrote. “The longer a given facility remains closed, the less likely it is ever to reopen even if the admitting privileges requirement is ultimately held unconstitutional.”

So just how far is too far in cutting off access to abortion services? That’s the open question. Justice Breyer’s concerns were echoed by Nancy Northup, president and CEO of the Center for Reproductive Rights, in a statement following the ruling. “The shattering stories of women turned away at clinic doors and denied their constitutional right to abortion are already numerous, and they multiply every single day this underhanded law is enforced,” Northup said. But despite the very real reproductive health-care crisis unfolding in Texas, the Fifth Circuit has not yet found a limit on how far a state can go in shaming patients in need of abortion care, and it’s hard to see them finding one here.

In Tuesday’s Supreme Court opinion, the dissenters suggested that there were at least four votes to consider the constitutionality of the admitting privileges requirement no matter what ultimately happens at the circuit court in January. That means that despite Texas’ earlier assurances to the Roberts Court, there’s a good chance the issue will be back before the nation’s highest court after the Fifth Circuit issues its ruling next year with likely enough justices willing to take the case then.

In the meantime, reproductive rights advocates are considering all their options for moving ahead. “We are not giving up on Texas women,” said Louise Melling, deputy legal director of the American Civil Liberties Union. “If the constitutional right to abortion means anything, it must mean that laws like this one that prevent women from obtaining an abortion must be invalidated. This is a very disappointing decision, but we will continue to do everything we can to protect the health and rights of Texas women.”