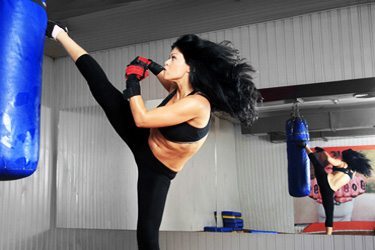 In addition to helping survivors cope, exercise is also a way to release the feelings of anger and rage that can also be common after sexual assault. Kickboxing via Shutterstock

One of the hardest parts of recovery after sexual assault is regaining control over your life. Rapists steal a survivor’s control by violating their bodily autonomy, and the aftermath can be a series of ups and downs for survivors, battling back against both the emotional and physical trauma, until some version of a “new normal” emerges.

As a rape survivor, after initially doing any and everything to harm my body after my assault, health and fitness emerged as one of my most powerful tools to cope, heal, and reignite after my personal trauma. For me, self care was a critical component of my recovery because a large part of surviving rape is getting back to a healthy place in relation to your mind, body, and spirit.

As many people know, one of the benefits of exercise is the release of endorphins that can regulate your energy levels and minimize stress and anxiety. These endorphins—the neurotransmitters in the brain that put us in a “good” mood—are even more necessary for survivors, who are often battling feelings of sadness and depression. While post-traumatic stress disorder (PTSD) is now most commonly associated with veterans, it also is something that impacts survivors in a major way. The National Center for PTSD recommends beginning exercise as a form of treatment for survivors of trauma, because it helps reduce physical tension and increase feelings of control. In addition to helping survivors cope, exercise is a way to release the feelings of anger and rage that can also be common after sexual assault.

It’s different for every survivor, and there is always a danger that exercise can be abused to overcompensate for emotional trauma, but after speaking with a number of survivors about how they prioritized their health after surviving sexual violence, a common theme emerged: Self care after rape is about regaining control.

“Exercise and fitness have always been a big part of my life,” one survivor told me. “After my assault it became a lot more important to me, because it was a way to keep my mind off of [my rape]. I didn’t want my assault to dominate everything I thought about, and for me exercise is about being stronger as a person. I also love yoga, and it’s become something I have to do, otherwise I feel off.”

Another survivor told me that martial arts before and after her assault made her feel strong and fierce: “I’ve been practicing Aikido, a self-defensive martial art, since the fall of 2010. … I felt like I was regaining control over my body and getting comfortable in my skin again. Right after the rape, my mother said something like, ‘I guess all that Aikido didn’t help after all,’ and in many ways, re-devoting myself to the art refuted that. … I found this practice ‘purifying.’ It allowed me to really inhabit my body and not feel or think of anything except practicing. It helped me feel like me again—not some damaged or broken version of not-me.”

Hitting things is helpful. I started doing kickboxing after my assault to release a lot of the rage I felt just below the surface that at times felt all-consuming. Another survivor told me that she too turned to kickboxing after her assault because “being able to punch the living [crap] out of an inanimate object helped keep panic and anxiety attacks at bay.”

There is always the risk of engaging in too much of a good thing, and survivors told me they had to be careful not to overdo it. “I had to work hard on not overworking myself—a real problem, considering I tried to replace self-abuse and self-harm (e.g., cutting) with working out. […] I looked for control and power through training and exercise,” a survivor wrote.

Another survivor who experienced a complex and sometimes unhealthy relationship to exercise before her assault, also struggled after her assault to strike a healthy balance. “I had struggled with eating disorders in high school and I was already not eating enough and exercising too much,” she said. “It was something that I was already using to disassociate a lot.” She said it took years for her to find a healthy relationship to fitness, but that it was a critical component to her recovery because there is a very real connection between a healthy body and a healthy mind.

Along with martial arts and intense exercise to release tension and pent-up stress and anger, yoga is a way in which survivors have healed themselves in the long struggle after sexual assault. “After my rape and being diagnosed with post-traumatic stress disorder, I felt a disconnection from my body,” a survivor told me. “My body felt frozen until I got on the mat. With yoga I was able to reconnect with my body again. I [had] done yoga pre-trauma, but … not until after my rape did I realize how powerful and healing that yoga really was.”

The endorphins and the ability to regain control over one aspect of your life are how exercise can be essential for survivors. Exercise allows a survivor to develop a close relationship with their own physical being—a feeling that is lost temporarily after rape. And while nothing is perfect, prioritizing your mind and spirit through exercise is one way you can work your way back from the deepest trauma imaginable.