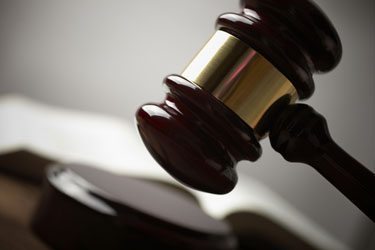 The 2-1 ruling requires crisis pregnancy centers disclose whether they have licensed medical providers at their facilities. Gavel via Shutterstock

A federal judge dismissed part of a lawsuit challenging a North Dakota law that bans abortions based on fetal anomalies or the gender of a fetus.

The law, HB 1305, bans abortions for reasons of sex selection and for genetic fetal anomaly. It is believed to be the most restrictive of its kind in the nation. North Dakota’s only abortion clinic, the Red River Women’s Clinic, represented by the New York City-based Center for Reproductive Rights, brought on a lawsuit in June challenging both HB 1305 and HB 1456, a law that would make virtually all abortions in the state illegal after the point at which cardiac activity can be detected in a pregnancy, which can be as early as six weeks into pregnancy. U.S. District Judge Daniel Hovland temporarily blocked the fetal heartbeat ban in July calling it “clearly invalid and unconstitutional.”

The clinic asked the court to dismiss its legal challenge to the gender and fetal anomaly law because it determined that the law doesn’t apply to its practice. “Anti-choice politicians in North Dakota made their agenda obvious when they passed not one, but five laws attempting to eliminate safe and legal abortion in the state,” said Janet Crepps, senior counsel at CRR, in a statement explaining the decision to drop the legal challenge to the reasons-based ban. “And the motivation behind HB 1305 was no different: it is an unconstitutional law designed to block women’s access to reproductive health care services and give politicians license to question and intrude upon personal and private medical decisions.”

“However, through the course of our legal challenge to these blatantly unconstitutional laws, it is not clear that HB 1305 will have a direct impact on any women seeking abortion services at the Red River Women’s Clinic at this time,” Crepps said.

These gender-selection and fetal-heartbeat bans were not the only anti-choice measures to make their way through the state in recent legislative sessions. North Dakota also passed a 20-week “fetal pain” ban that went into effect in August. The clinic chose not to challenge that law for similar reasons, saying the law does not not apply because the clinic does not perform abortions after 16 weeks. Another new law requires a doctor who performs abortions to have hospital admitting privileges. A lawsuit challenging that measure was combined with another one challenging a 2011 law that outlaws one of two drugs used in medication (non-surgical) abortions, effectively banning medication abortions in the state. That legal challenge was brought in state court and Judge Wickham Corwin ruled the 2011 law violates the state and U.S. constitutions and permanently blocked it from taking effect in July.

The Red River Women’s Clinic dismissed its claim challenging the gender and fetal anomaly ban without prejudice, meaning it can revive them at a later date if warranted.