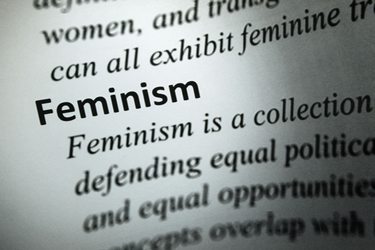 It is not the responsibility of feminists of color to tell white feminists we exist and have been a part of the feminist movement for a long time. Dictionary: Feminism via Shutterstock

I was not surprised when I viewed Amanda Marcotte’s presentation on online feminism at this year’s Netroots Nation conference, in which she pointed mostly to young, hip, white female bloggers writing today. While there are many women of color blogging at sites like the Crunk Feminist Collective, women of color were represented in Marcotte’s PowerPoint presentation by one stock photo of a Black woman holding car keys, with a statement about how online feminists are “driving the movement forward.” The PowerPoint slide is indicative of a larger problem in feminism: the inability to see or identify with women of color who are feminists. It’s not a good look, but then again, this slight is not unexpected given the history between white women and feminists of color.

My purpose in this piece is not to bash Amanda Marcotte—a contributor here at Rewire—but to illuminate some of the long history of tension between the feminist movement and women of color. Writing this piece in the wake of the George Zimmerman trial has not been easy. Is it always going to be this way? Will it always be this difficult to come together with white feminists, as women of color, to work on the many pressing issues in this country, including the rollback of women’s rights, specifically reproductive rights?

The tension between white feminists and feminists of color has existed for a long time, in part because of race, class, and positionality. It is fair to ask, “Why is it so hard for white feminists to embrace, celebrate, and partner with their sisters of color?” Is intersectionality just a dream, or can we work past this conundrum?

It is time for white feminists to become more aware of their internalized compliance to the “isms” that threaten to divide us all, from historical and contemporary perspectives. How can we come together without being torn apart by the other “ism” that threatens feminism: racism? A brief look at the history of the feminist movement and women of color, and a prescription for our future together, is long overdue.

A History of Privileged Positions

Women of color have never had the luxury of simply focusing on women’s issues. Considerations of race, racism, and economic and social injustices have always intertwined with issues of patriarchy and sexism. Women of color who also hold feminist beliefs are also acutely aware of how their communities, broadly defined, are affected by outside forces. One classic standoff in the history of the women’s movement and feminism was between journalist and civil rights leader Ida B. Wells and women’s suffragist Frances Willard. Wells wanted Willard to recognize the problem of lynching in the South, but Willard believed that Black men were drinkers and responsible for the rape of white women. It’s reprehensible, yes, but Willard’s privileged position kept her from seeing the issues that were important for the Black community and Ida B. Wells. It also showed how she bought into the narrative of stereotypes about African-American men, accepting the trumped-up notion that African-American men, presumed to be more alcoholic than white men, were a sexual menace to white women and were being properly targeted. Wells fought against this strenuously, and their battle strained relationships between African-American and white women in the suffrage and temperance movements.

Even with the advent of the fully-formed feminist movement in the post-civil-rights-movement 1970s, Black women and other women of color were relegated to the sidelines, while white women became the face of feminism. As Gloria Steinem’s good looks were heralded as the face of feminism, other women of color were partnering together to work for a common cause. The Combahee River Collective Statement from 1977 chronicled the genesis, interests, and issues Black feminists faced, and their statements still resonate today. The statement importantly noted that Black feminists were interested in combating a “range of oppressions.” It said, “We do not have racial, sexual, heterosexual, or class privilege to rely upon, nor do we have even the minimal access to resources and power that groups who possess anyone of these types of privilege have.”

The collective nailed why it is easier to be a white feminist than it is to be a feminist of color: Without a position of privilege to call on, it is even harder as a woman of color to fight for issues that are important for every woman, but especially for women of color. Not recognizing that privilege of whiteness or class hampers the ability of feminists across ethnic lines to join together for common causes.

The Rise of Womanism

In the 1980s, the advent of womanist and mujerista (derived from the Spanish word mujer, or “woman” in English) movements and theologies spoke to African-American and Latina women who did not find their issues were being addressed within the feminist movement.

The term womanism arose from Alice Walker’s book In Search of Our Mothers’ Gardens, in which she described a womanist as a Black feminist or feminist of color. The term womanist even became a theological construct, taught in divinity schools and religious studies programs across the nation and world. Shortly thereafter, Latinas embraced mujerista as a way to claim their space over white feminists. Both groups created a space for themselves in reaction to white feminism, which they believed held no room for them because of classism and racial issues that at best white feminists did not understand, and at worst used against women of color.

It is not, however, the responsibility of feminists of color to tell white feminists we exist and have been a part of the feminist movement for a long time. When feminists of color or Black feminists—or whatever moniker they choose—are passed over and ignored, it is an insult, intentional or not. The stock photo of a Black woman in Marcotte’s presentation stands as a symbol of privilege that enables white feminists to ignore the struggles of the other women working right beside them.

There are innumerable websites dedicated to feminist, womanist, or mujerista issues. They are easy to find, and much of their content is shared on Twitter and Facebook. Now is not the time for white feminists to pretend the rest of us do not exist. There is too much at stake. Many of us are engaged in state battles for women’s reproductive rights in Texas and North Carolina. Immigration, unemployment, and domestic violence are just the tip of the iceberg of our collective concerns.

Where to Go From Here?

Ignoring our common struggles and presence because of white privilege and historical ignorance is no longer an excuse. Solidarity cannot come from only one group reaching out to the other. White feminists must come to grips with their own internalized structures of racism, classism, and even sexism that prevent them from seeing other feminists of color. It is also important to understand women of color may not be comfortable calling themselves feminists. Understand that this reticence stems from both historical constructs of feminism and structures of communities and beliefs that may not want to call ourselves feminists.

Most importantly, all sides must work together to address current setbacks in the fight for women’s rights, especially reproductive rights. While the rhetoric of the right is about “protecting” women, the rules enacted in states like Virginia, Texas, and others are anything but. As reproductive rights of women are being eroded and erased in states like Texas and North Carolina, among others, surely there is a way to get past this invisibility issue. The issues facing women in the United States today are too important to ignore, and if we’re going to drive into a better future for women, let us make sure we know who is riding with us.