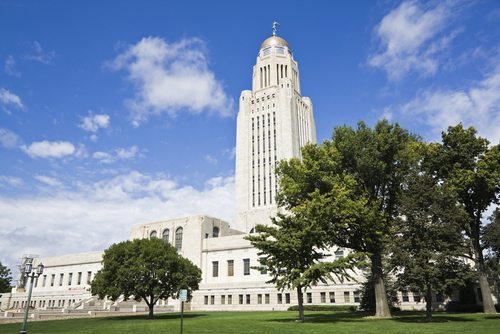 The Gosnell trial is over, but states continue to use it as an excuse to push their anti-choice agenda. Nebraska State Capitol via Shutterstock

While national politicians mull the idea of a 20-week federal abortion ban as a response to the Dr. Kermit Gosnell case, state legislators continue to push for unnecessary clinic regulations under the guise of making abortion “safer” for patients. Both Nebraska and New Hampshire have joined in the chorus of states suggesting they may propose new bills to monitor abortion providers, calling them necessary in rooting out unsafe practices.

Nebraska state Sen. Bob Krist (R-Omaha) has vowed that next year he will introduce a bill to “require stricter oversight of doctors who provide abortions in Nebraska,” according to the Omaha World Herald. The state already requires clinics to be licensed and subject to inspections, making it unclear exactly what sort of proposal Sen. Krist may be devising over the legislative break.

In New Hampshire, state Rep. Kathleen Souza (R-Hillsborough) says she too is beginning to write legislation for clinics, but hers would require inspections and licensing of clinics in the state. Rep. Souza cites the Gosnell case as her impetus for the bill. “Nobody has oversight,” Souza told the New Hampshire Union Leader. “Right-to-life people have been trying to put in legislation for 20 years to require abortion clinic licensing and clinic inspections.”

New Hampshire reproductive rights advocates say they aren’t as concerned with attempts to license or inspect them, citing their own safety records, but are more worried about back door attempts to shut them down. They should be, if states like Pennsylvania, Alabama, and Virginia are served as examples, where “licensing” the clinics meant forcing them into expensive and medically unneeded remodels, staffing, and equipment purchasing.

They are right to be concerned, if American’s United for Life’s (AUL’s) model legislation for licensing and inspection of a clinic is in play. Even if a legislator decides to draft only portions of an anti-choice bill, and reject the sections calling for wider doorways or mandatory admitting privileges for doctors who perform abortions, the “fill in the blank” do it yourself licensing portion of the bill, complete with “[Insert appropriate amount]” when it comes to deciding how much an annual, renewable license must cost the clinic, is a set up for legislators to price clinics out of offering services.

Considering Rep. Souza is an avid AUL fan, even stating she “eagerly” awaits her copy of Defending Life, the anti-choice action group’s yearly list of model legislation to introduce in the session, the odds of her using an AUL template are fairly good. Whether she will use it as a suggestion, or simply fill in the blanks, remains to be seen.

Conservative legislators began using the Gosnell trial as a means to push anti-choice abortion restrictions in a variety of states with little success. One Pennsylvania lawmaker did evoke the Gosnell trial as a reason he believed no insurance plans in the state should be allowed to cover abortion. The bill passed the committee although it was unlikely the senator’s argument affected lawmakers on either side of the issue.