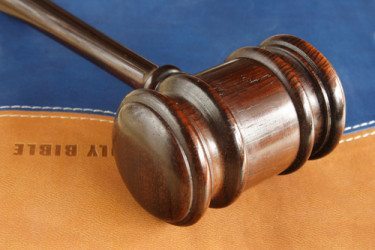 Science trumps ideology in the emergency contraception decision. Meanwhile, the depths of the anti-choice domestic terror network in Kansas become clearer. gavel on Bible via Shutterstock

Legal Wrap is a round-up of key legal and reproductive justice news.

Late last week U.S. District Court Judge Edward Korman released a scathing, detailed opinion ordering the U.S. Food and Drug Administration (FDA) to make emergency contraction available over-the-counter and without a prescription to women of all ages. It was a huge victory for reproductive health advocates and one that was a long time in the making. According to the order, emergency contraception (EC) must be available over-the-counter within 30 days. Prior to the ruling, only women age 17 and older could get EC without a prescription. The ruling cites extensively the scientific support for making EC widely available. However, that won’t end the debate for conservatives who oppose EC. After all, they’ve filed over 50 lawsuits challenging contraception availability in health insurance plans.

It’s rare a legal opinion produces as many zingers as the EC decision. Thankfully, Rewire Director of Research and Investigations, Sharona Coutts, put together this great list of the 11 best lines from the opinion. While a fun read, it also drives home the truly political nature of the original decision to restrict EC availability.

Angel Dillard, a well-known anti-choice terrorist with ties to Scott Roeder, the man who murdered Dr. George Tiller, is fighting to keep communications she had with Roeder and another inmate, Robert Campbell, secret. Dillard is currently under investigation by the Department of Justice (DOJ) for threatening letters she sent to Dr. Mila Means, an abortion provider who stepped in to keep access to safe abortion care available after Tiller’s murder. What is Dillard trying to keep out of the DOJ investigation? As Rewire Editor in Chef Jodi Jacobson reports, she’s trying to hide conversations in which Dillard asked Campbell to firebomb Dr. Means’ house.

The National Women’s Law Center has filed a complaint on behalf of a pregnant hospital worker who was forced to take unpaid leave because her employer refused to accommodate her pregnancy. I interviewed the plaintiff and her attorney, who discussed how low-income workers are especially vulnerable to unlawful pregnancy discrimination.

Rewire Online Campaigns Director Natasha Chart has this terrific piece on the disturbing trend of prosecuting parents for “theft of services” for enrolling their children in different school districts than the ones in which they live. Not surprisingly, those prosecutions disproportionately affect people of color.

An Alabama trooper who pleaded guilty to coercing a woman to perform sex acts on him in order to avoid a shoplifting charge is asking the federal judge in charge of sentencing him to strike the word “rape” from the order and replace it with “sex act.” According to reports, he’s worried being labeled a rapist “will negatively affect his security ratings for purpose of designation with the Bureau of Prisons and carries negative connotations that will adversely affect him in many respects.” Perhaps the trooper should have used his decades of experience in law enforcement to think that one through before he engaged in such an egregious abuse of power.