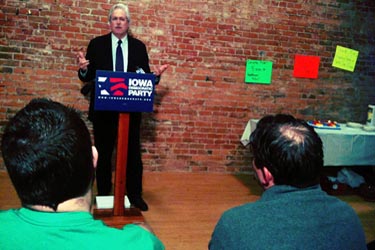 When it comes to fighting for the right for women to decide when they want to remain pregnant, our opponents often try to frame the debate as one of fickle pregnant women aborting for frivolous reasons. But it’s even more harmful when our allies fall into the same rhetorical trap.

Discussing the likelihood that Iowa Republicans will once more come after the state’s Medicaid coverage of abortions in the cases of rape, incest, and the life of the pregnant person, Iowa Democrat Jack Hatch tells the Associated Press that the Republicans will be unsuccessful, noting that these are “medically-needed” abortions versus “recreational abortions.”

As someone who has had a dilation and curettage (D&C), I can firmly state that whatever the circumstances, it was by no means “fun,” a term most people would be inclined to associate with “recreational activities.” Recreational activities are done in your spare time. They are hobbies. They are enjoyable. They are none of the things that would be associated with ending a pregnancy, and to use the term implies a flippant nature to a woman’s life decisions and we already have enough of that from  anti-choice politicians… we don’t need more from those supposedly supporting us.

Abortions are the result of a decision to terminate a pregnancy after weighing one’s life circumstance and deciding, whether because of financial circumstances, current family situation, health concerns, or future aspirations, that a specific pregnancy is untenable and that the benefits of ending the pregnancy far outweigh those of bearing a child. It doesn’t matter whether this is because of medical issues, financial issues, sexual assault, or other personal reasons, the “necessary” versus “recreational” mentality is no more valid than the “good abortion/bad abortion” juxtaposition.

The choice to terminate is not a frivolous decision. Abortions are not “recreational” regardless of the reason behind them. We hope that our allies understand that and support the women who do so, for whatever reason they choose.