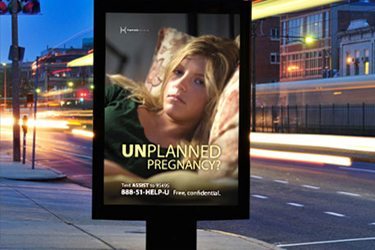 Crisis pregnancy centers, the so-called “abortion alternatives” arm of the anti-choice movement, have a long and complicated history when it comes to deception and subterfuge. Many of the original pregnancy help centers were actually formed to house radical anti-choice activists, providing office space and proximity to medical clinics, so they could easily harass patients arriving for reproductive health care. Randall Terry started his Operation Rescue campaigns working out of a crisis pregnancy center dubbed “Project Life” in New York in 1984, and later Operation Rescue organizer Chris Slattery pushed towards a veneer of legitimacy by introducing the idea of on-site ultrasounds and medical staff.

Regardless of whom is on the staff, however, the fact remains that a key tenet of crisis pregnancy centers is to convince a pregnant woman to continue a pregnancy by any means necessary and, when possible, to proselytize. As C.L Cooper wrote in a 2001 piece for WomensENews:

[B]ased on the centers’ description of themselves and other indications, it appears that religious proselytizing is at the heart of most of the 3,000 crisis pregnancy centers across the country, and the essential service they are delivering appears to be a religious anti-abortion message.

“The most rewarding thing for me personally is when I see a woman not only choose to carry her child, but also choose to make Jesus as the Lord and Savior of her life,” said Sally Rosiek on an October 17 broadcast by Focus on the Family, a religious right anti-abortion organization. Rosiek is the director of a crisis pregnancy center.

“So it’s evangelical in nature?” asked host James Dobson, the group’s president. “It certainly is,” Rosiek bragged. “The salvation rate for crisis pregnancy centers is higher than churches.” It is, she said, “friendship evangelism.”

It’s been well over a decade since Cooper wrote those words, but the only thing that has changed is that CPCs are no longer subtle about their grab for taxpayer funding and, instead, have become outright aggressive. No longer are they content with the dollars they receive as part of abstinence-only eduction programs or from states like Minnesota which offer them funding in exchange for allegedly “providing support” to women who want to continue unintended pregnancies. Instead, many are looking for new ways to get additional taxpayer support not only in spite of their religious dogma but in some states because of the very issues that would have many taxpayers uncomfortable with them in the first place.

Not content to subsist on benevolent donations, Care Net Pregnancy Center, a deceptive CPC chain with sites in Wisconsin, petitioned the city of Madison for low-interest loans on over half a million dollars the group wanted in order to build a 36-unit apartment building to house women with unintended pregnancies during and for some time after the birth. After concern over the CPCs misleading health care information, the sponsors of the proposal on the city council eventually withdrew their support. Otherwise, the group may have received those funds from the city’s Affordable Housing Trust Fund and Community Development Housing Reserve Fund.

Misleading and inaccurate health information was also cited as a concern in the Missouri debate over whether crisis pregnancy centers should be allowed to receive the same tax credits as food banks or organizations that help needy children. Opponents of the bill said no, pointing to the misleading information the groups give out as they try to coerce women out of abortions and birth control. Bill supporters, on the other hand, argued that there was just a disagreement over what “medically accurate” really means in the first place. Mike Lear at MissouriNet reported:

Even without tax credits for donations, crisis pregnancy centers often are able to take advantage of city, state and federal funding for doing infrastructure work, freeing up their other funds to be used in their proselytizing, as Sofia Resnick reported back in November of 2012. If this was a Planned Parenthood affiliate, there would be charges of fungible funds and indirect supporting by taxpayers for something which they may disagree. But since these are religiously-affiliated organizations, no one makes a peep.

In fact, Missouri is bending over backwards to ensure that crisis pregnancy centers can both continue receiving any sort of funding they can get from government entities and still fully engage in their religious activities, especially when “counseling” the pregnant. Both the House and Senate have introduced bills stating:

188.125. 1. It is the intent of the general assembly to acknowledge the rights of an alternatives-to-abortion agency and its officers, agents, employees, and volunteers to freely assemble and to freely engage in religious practices and speech without governmental interference, and that the constitutions and laws of the United States and the state of Missouri shall be interpreted, construed, applied, and enforced to fully protect such rights.

2. A political subdivision of this state is preempted from enacting, adopting, maintaining, or enforcing any order, ordinance, rule, regulation, policy, or other similar measure that prohibits, restricts, limits, controls, directs, interferes with, or otherwise adversely affects an alternatives-to-abortion agency or its officers, agents, employees, or volunteers’ assembly, religious practices, or speech, including but not limited to counseling, referrals, or education of, advertising or information to, or other communications with, clients, patients, other persons, or the public.

So the state would be subsidizing efforts to convert low-income mothers-to-be. It’s a bill so good you almost have to wonder if the crisis pregnancy centers wrote it themselves.

Freshman Rep. Kelly Packer, R-McCammon, said she crafted the bill after meeting Stanton Healthcare’s head, anti-abortion activist Brandi Swindell, who told her the organization had recently been audited and had to pay $6,000 in back sales taxes.

“They unfortunately had not been paying (sales) taxes for seven years,” Packer told the House Revenue and Taxation Committee on Wednesday. “They thought they were already under a tax-exemption umbrella, and found out unfortunately that they weren’t. And that $6,000, though not maybe a lot for the state of Idaho, provides a hardship for their facility.”

According to NPR, the actual purchase was for two ultrasound machines (presumably this machine in 2010 was one of them), but either way, Parker was adamant that the bill applied only to crisis pregnancy centers, no other medical centers, and especially not those who provide abortions. Russell writes:

Packer told the panel, “I’m not sure why some are chosen and some are not, and today I speak primarily for this individual organization rather than the whole group.” Packer said she excluded pregnancy resource centers that perform abortions from the tax break in her bill “because of my personal moral code.” If the bill becomes law, it would add the pregnancy centers to a section of state law that provides sales tax exemptions for a specific list of organizations including the March of Dimes, the American Cancer Society, the Special Olympics and the Idaho Ronald McDonald House.

That the bill was written expressly to help Swindell isn’t in doubt. Whether the bill was written by Packer or someone on the legislative side, or by Swindell or her staff, is a little more fuzzy. Swindell herself obviously takes ownership of the bill, referring to it multiple times on her Facebook page as “our legislation” in recent postings. Her assistant implies a bit more, telling a friend on twitter in early January that she won’t see her in D.C. later that month for the March for Life because “we’re pushing legislation through in ID” at the same time (the bill was initially introduced on January 25th), or tweeting in December that she “went from writing legislation to picking up Brandi’s dry cleaning.”

If Stanton Healthcare did in fact write state legislation, it would by no means be the first anti-choice organization to do so, nor even be the first crisis pregnancy center to write bills directly benefiting themselves. After all, Alpha Center and their lawyer, Harold Cassidy, were believed to have been highly involved in the drafting of the mandatory crisis pregnancy center counseling and 72 hour wait bill in South Dakota, a bill that would greatly increase the number of clients who would go through their doors.

As CPCs continue to pass off inaccurate medical information as a “religious right to free speech,” they are coming up with even more egregious ways to force all taxpayers to fund them, regardless of our personal feelings about their mission or their religious beliefs. If they are now going to be the ones advising or even writing the legislation that will fatten their own wallets while the continue to mislead and discriminate, can someone please propose a “No Taxpayer Funding of Crisis Pregnancy Centers” bill of our own?