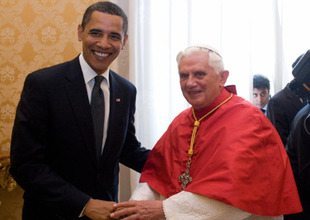 See all our coverage of the Birth Control Mandate 2011 here.

This article was amended at 2:22 pm Friday, November 25th to add a missing paragraph and missing words in three sentences.

When it comes to contraception, Catholics have stopped listening to popes, bishops and other institutional leaders.  It seems the only person left listening is President Obama. Obama, however, lacks the theological training—and it would seem the scholarly advice—needed to figure out if the bishops and various hospitals, universities, and social service agencies clamoring for a broadened “religious exemption” from new federal regulations really need them in order to be good Catholics. The regulations require insurance plans offered by employers to cover contraception without a co-pay, although they exempt churches and other specifically religious institutions from the requirement. The United States Conference of Catholic Bishops and other groups have been lobbying for a much broader exemption.

The President seems unaware of the fact that Catholic disagreement with the ban on birth control goes far beyond the average Catholic layperson. Some bishops, many priests, religious orders, theologians and church-related groups have publicly and privately disagreed with blanket prohibition of contraception. All of them, individuals and institutions, are free to follow their conscience on contraception and there is ample evidence that many of the very groups asking for an exemption from the new federal regulations have not followed church regulations religiously. Some within the organizations may agree with the ban, but not all, and none are required to do so.

Of course, it would take courage for organizations such as the Catholic Health Association (which sent a letter to the Department of Health and Human Services in September supporting a broader exemption) or Catholic Charities to publicly buck the U.S. bishops,  just follow the law and give their employees health insurance that makes it more possible to avoid pregnancies they cannot afford or do not want; but after all, being a Catholic is all about courage and helping the poor and marginalized. A fair number of employees of Catholic institutions are low-income workers, struggling to get by on a minimum wage. We Catholics are taught to follow our conscience rather than the positions of the Catholic church, even if it means getting kicked out of the church.  If Obama’s current religious advisers don’t know that, all he has to do is call one of the most trusted of Catholic theologians, Fr. Richard McBrien of Notre Dame. McBrien will repeat what he has said in his widely used text Catholicism:

Centuries earlier Thomas Aquinas said the same thing.  Yet, the Catholic-affiliated institutions asking for a religious exemption insist that corporations, like persons, have a conscience.

There is every indication that the conscience of these institutions tells them the church prohibition on contraception is wrong. Survey data and the behavior of these institutions evidence widespread disagreement with the official, but not infallible prohibition. Modest due diligence on the part of the administration before it grants a broader exemption is called for. They would discover that it is not only ordinary Catholics who believe birth control results in responsible parenthood and healthier relationships (98 percent of sexually-active Catholic women have used methods of birth control prohibited by the Vatican), but also bishops conferences, priests and theologians worldwide. The administration would also find numerous examples of “Catholic” agencies that have disregarded the prohibition and are providing or have provided contraception, including contraceptive sterilization.

That foundation of dissent from the 1968 Encyclical “Humanae Vitae,” which dashed Catholic hope of a new openness on sex and reproduction, was found in the statement of the Vatican spokesperson, Msgr.F. Lambruschini who assured reporters that it as not infallible a statement not contradicted by the Vatican. He then disturbed many of the world’s bishops by claiming the encyclical required “the assent of the faithful.”

That demand for assent to a non-infallible teaching opened a floodgate of commentary by Bishops’ Conferences around the world, hedging their bets on the encyclical and expressing sympathy with Catholics who decided not to follow it. The Canadian bishops wrote:

In accordance with the accepted principles of moral theology… persons who have tried sincerely but without success to pursue a line of conduct in keeping with the given directives, may be safely assured that whoever honestly chooses that course which seems right to him does so in good conscience.

The Dutch bishops were more forthright. All nine met and issued a statement that said they “consider that the encyclical’s total rejection of contraceptive methods is not convincing on the basis of the arguments put forward.” If the Dutch bishops did not find the Catholic prohibition on birth control convincing who is the President to de facto affirm a Catholic doctrine by providing some Catholics with an exemption from public policy mandates supported by popular, scientific and medical opinion?

The granting of an exemption from regulations that are in the best interest of public health and enhance the lives especially of women should never be a political act, but rather a careful, factual appraisal of an urgent and clear religious claim.

Many Catholic religious leaders have conducted that appraisal and found Humanae Vitae wanting. French, German, British, Belgian, and other bishops, while cautious not to openly challenge the teaching itself, issued statements that stressed the right of Catholics to follow their conscience. U.S. bishops, as always eager to demonstrate their loyalty to Rome, towed the line. American priests and theologians were far less constrained. Some theologians and priests immediately issued a Statement of Conscience that rejected Humanae Vitae. The authors felt so strongly that they published the statement in the Washington Post, leading D.C. Cardinal Patrick O’Boyle to punish about 40 of its signers who reported to him. The courage shown by those theologians and priests would be welcome among the leaders of today’s high-powered Catholic charities.

Among the signers was a revered DC Jesuit, Horace McKenna. Fr. McKenna was a passionate advocate of the poor who eventually founded D.C.’s SOME (So Others Might Eat). Based on his experience of hearing the confessions of DC’s poorest Catholics, he made it clear to Cardinal O’Boyle that he would tell them in confession that they were not bound to follow the prohibition. In short order, the Cardinal stripped him the right of hearing confessions.

In order to avoid punishment and conflict, most dissent on contraception by Catholic agencies is quiet. Catholic social services agencies treating migrant workers have had contracts with Planned Parenthood to provide contraception for their clients; Catholic hospitals allow doctors who have offices on their premises to prescribe birth control, some mergers between Catholic and non-Catholic hospitals accommodate family planning – and historically even found a way to provide contraceptive sterilization. Some deals fly under the radar and survive; others are squashed.

The bishops and cardinals have not changed.  Unfortunately, there are few Horace McKennas left who will stand up for the poor against the tired efforts of bishops to demand public policy that conforms to their narrow view of what it means to be Catholic. If Horace McKenna were president of Catholic University or ran Catholic Charities instead of Larry Snyder, he’d be lobbying the bishops to provide birth control for poor women and migrant workers rather than fighting for the right to deny janitors, college students and healthcare aides insurance for contraception. He certainly would not be supporting the bishops, who, in the face of an Amnesty International report on the immorally-high rate of maternal death in the United States and the increasing poverty of women and children coldly claimed that pregnancy was not a disease and contraception not preventive medicine.

Today’s bishops are a cold-hearted, power-hungry lot.  Not a Raymond Hunthausen among them. In 1986, Archbishop Raymond Hunthausen of Seattle was charged by the Vatican with allowing sterilizations to be provided in the diocese’s hospitals–-as well as lack of firmness on altar girls and gays. He was, for a time, denied the right to run his diocese; Bishops Donald Wuerl was appointed as “co-adjutor” of the diocese to ensure orthodoxy. Wuerl has risen to the rank of Cardinal and now presides over one of the poorest of the dioceses, Washington D.C. In the church today, only orthodoxy is rewarded.

The heavy hand of the Vatican also came down on the Sisters of Mercy. In 1980 after a five-year study, the Sisters, who then ran one of the largest hospital systems in the United States (only the Veterans Administration was larger) , decided that good medical care included providing postpartum contraceptive sterilization when women requested it. To deny them would subject the women to a second medical risk if they were sterilized at a later date. The Vatican got wind of the possible change in policy and threatened to put the whole community in “receivership” and take over their hospitals, schools, and everything else if they did not change their mind and prohibit sterilization. The Sisters capitulated, fearing greater harm to their patients if the Vatican were in charge.

Can the Obama administration decide which action was more “Catholic,” the Vatican’s power grab, or the sisters desire to provide women with the safest medical care? Can or should the state get itself in a position of closely scrutinizing the validity of religious and moral claims for an exemption from public policy decisions?  We have just such a process in place for deciding whether a request to be exempt from military service: The state decides on a case-by-case basis if the claim is genuine or motivated by fear, laziness, or other less-than-honorable reasons. If we are to grant broad exemptions to religious institutions, should not a similar process be used?

Best Obama stay out of the internal theological disagreements Catholics have about reproductive health. Best he focus on implementing the long-standing policy consensus that family planning is essential to women’s health and empowerment and contributes to the social and economic wellbeing of all. The religious exemption the HHS has drafted which exempts organizations that have the inculcation of religion as their primary purpose and which employ and serve primarily members of their own faith respects unambiguous religious institutions.  Combined with the conscience protection offered to individuals it is more than adequate protection of religious liberty.

These groups are asking you to join them in telling the White House not to capitulate to the United States Conference of Catholic Bishops and throw women under the bus on contraceptive coverage:

Physicians for Reproductive Choice and Health