Sen. Mike Lee (R-Utah) can’t figure out why the Supreme Court and all related proceedings have become politicized. During day two of Judge Amy Coney Barrett’s confirmation hearing to fill Ruth Bader Ginsburg’s vacancy on the Supreme Court, Lee lamented the polarization of such hearings and other Supreme Court-related affairs. These proceedings should be “apolitical,” Lee claimed. It’s a national disgrace that they’re now contentious, Lee groaned.

Lee then went on rant about everything from court packing to the Affordable Care Act before using remaining time to spread an insidious, politically charged anti-abortion lie: that fetuses feel pain and, as a result, gestational limits for abortion should be enacted at the state and federal levels.

This is, simply put, not true.

“To the best of our medical and scientific knowledge, fetuses do not feel pain during abortion,” Dr. Jenn Conti, OB-GYN and fellow with Physicians for Reproductive Health, said. “The brain, spinal systems, and nerves that are needed to feel pain have not developed yet. Pain requires a very high level of neurological development to create the ability to feel.”

Lee wasn’t the only Republican senator to use Barrett’s rushed confirmation hearing to perpetuate this dangerous, fabricated anti-abortion talking point.

Before lambasting his Democratic colleagues for using “political tactics” that “have nothing to do with this hearing,” Sen. Lindsey Graham (R-S.C.) claimed fetuses can feel pain after 20 weeks gestation as well. He then pointed to laws he has attempted to pass at the state and federal level to ban abortions occurring past 20 weeks.

Republican senators, for all their hypocritical, self-serving pontifications and well-documented flip-flopping, are not unintelligent. They know that research conducted by the American Congress of Obstetricians and Gynecologists and many other respected medical organizations and institutions show no evidence to back up the claim that a fetus can feel pain during an abortion or any other common, legal medical procedure that occurs during pregnancy. They also know that their efforts to eventually overturn Roe v. Wade are wildly unpopular. The majority of people in the United States support the legal right to access abortion care—including 52 percent of Republicans.

“Anti-abortion proponents are well aware of these findings and have no regard for evidence-based medicine or science,” Conti says. “The real intent here is to take the decision about abortion away from women and their doctors.” 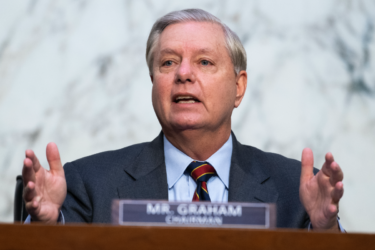 Senators like Graham and Lee also do not care that the choice to continue to spread these and other anti-abortion lies puts the lives of abortion providers and those they care for in immediate and direct danger. For anti-abortion senators, much like the dwindling anti-abortion movement they’ve come to rely on for reelection, any deadly means justify the ends. Death threats, bomb threats, and both in-person and online harassment against abortion providers and clinics that provide abortion have been on the rise since President Donald Trump’s inauguration, no doubt in part of his continued anti-abortion rhetoric and outright lies that falsely claim pregnant people are “executing their babies” after birth and having abortions in the “final moments of childbirth.”

These lies do not sway the public or move the political needle as it applies to abortion rights—they only demonize both the families that are faced with difficult decisions after learning that their wanted pregnancy is no longer viable and pregnant people who were unable to access abortion care when they wanted and needed it and, as a result, are forced to have an abortion later in pregnancy than they had previously and originally desired by the very people who claim to hate abortion procedures that occur later in pregnancy.

The lie that fetuses feel pain also gives credence to laws that prohibit OB-GYNs from adequately caring for their patients, putting the pregnant people who already live in a country with the worst maternal mortality rate of any developed nation at greater risk.

“The dehumanizing rhetoric and coverage of scenarios like this angers me because my patients are real people, deserving of our respect and understanding,” Conti said. “One patient that comes to mind was a young woman who at 21 weeks gestation suddenly started hemorrhaging from a condition called placental abruption. The best medical care for her was a dilation and evacuation (D&E) procedure. I cannot imagine forcing her to risk further hemorrhage and major abdominal surgery through either a vaginal delivery or c-section because of political priorities.”

And Lee certainly knew what he was doing when he played infuriatingly dense and acted as if the laws that do and will reach the Supreme Court becoming “personal” for voters is an outcome far beyond his understanding.

What he meant is the possibility of Roe v. Wade falling isn’t personal for him. Because unlike the pregnant people Lee and his GOP colleagues continue to harm with their feckless lies and bad-faith arguments, he will never know what it’s like to be subjected to government-mandated forced birth and the ramifications of anti-abortion laws that put every pregnant person and those who care for them in danger.