At a rally marking the 50th anniversary of the 1963 March on Washington for Jobs and Freedom at the Lincoln Memorial on Saturday, Myrlie Evers-Williams finally completed a mission assigned to her by tragedy a half-century ago. Then, little more than a month after her husband, Medgar Evers, president of the NAACP’s Mississippi chapter, was slain in his driveway as his children watched, the young widow was the only woman scheduled to speak at the podium from which Dr. Martin Luther King, Jr. would deliver his best-remembered line: “I have a dream.”

But Myrlie Evers, as she was known then, missed her turn at the microphone, stuck in traffic on her way from the airport. (Daisy Bates, who strategized the integration of Little Rock High School, was drafted to Evers’ slot, and spoke all of 142 words.)

At Saturday’s commemoration, Evers-Williams not only had her turn, but also had some female company. House Minority Leader Nancy Pelosi addressed the crowd, which numbered in the tens of thousands, as did Sybrina Fulton, who gave a tribute to her slain son, Trayvon Martin; National Organization for Women President Terry O’Neill; and Barbara Arnwine, president and executive director of Lawyers’ Committee for Civil Rights Under Law. Rev. Bernice King, president of the King Center and daughter of the late civil rights leader, offered a closing prayer. Other women, too, were given turns at the mic at the event, titled “Realize the Dream,” and keynoted by the Rev. Al Sharpton and Martin Luther King III.

“Stand your ground,” Evers-Williams said, invoking the name of the notorious laws on the books in 16 states that allow the use of a lethal weapon against anyone the weapon-holder feels threatened by. “We can think of standing your ground in the negative,” she continued, “but I ask you today to flip that coin and give ‘stand your ground’ a positive ring for all who stand for justice and equality, and stand firm on the ground that we have already made, and be sure that nothing is going to be taken away from us.”

Among the gains won through protests and pressure of civil rights activists was the 1965 Voting Rights Act, the heart of which was struck down in June by the Supreme Court. Jo Ann Watson and the Rev. Marcella Christie attend Saturday’s rally commemorating the 50th anniversary of the 1963 March on Washington for Jobs and Freedom.

Jo Ann Watson, a Detroit city council member, came to the 1963 march with her grandparents when she was 12 years old, she told Rewire. It was important for her to return not only as an African American, she said, but also as a woman. Watson, who served as the director of the Detroit YWCA and went on to serve in the organization’s national headquarters as assistant executive director and head of the Y’s Office of Racial Justice, claims as her mentor the late Dorothy I. Height, the longtime leader of the National Council of Negro Women, who also held two of the YWCA posts Watson went on to fill.

“[S]he often talked to me with tears gleaming in her eyes,” Watson said. “She said no women were allowed to speak [at the 1963 march].”

Watson said Height had helped to plan that original march, but was deprived of a turn at the podium. Aside from the singer Mahalia Jackson, who performed that day, Height was the only woman seated on the platform next to the podium.

I found Watson seated on a bench in the shade along a footpath, taking a breather. Dressed elegantly in a black skirt and top and a fashionable chunky necklace, she held a red sign emblazoned with the slogan “End Racism. Heal America. Tax Wall Street.”

Her clothing honored the memory of the Sunday-best she and all her fellow marchers wore in 1963. The sign was a reminder that the 1963 march was as much about jobs as it was about rights.

“Wall Street has been bailed out fully,” Watson said. “And when you look at the number of corporate entities that have been given special resources from the federal government to recoup their losses, and they’ve not passed along the … benefits to the people who desperately need it.”

Few are the places in which that sentiment is as keenly felt as in Detroit, a majority African-American town where an emergency manager appointed by the governor filed a bankruptcy claim for the city in July. Should the bankruptcy go through, thousands of retirees who worked for the city will likely lose their pensions.

Seated next to Watson was the Rev. Marcella Christie of Plainfield, New Jersey, who came to the United States from Jamaica in 1978. She had just completed her Masters of Divinity degree, and is a minister at the Fountain Baptist Church.

The two women, who had never met before, commiserated over one sort of gender dynamic that seems to exist in every setting in which men and women work together. “Women are doing a lot of work; it’s just that they’re not getting the credit for it most of the time, in our churches,” Christie said. “You know, we do a lot of the work but we don’t get mentioned because we’re in the background.”

Even Ida B. Wells-Barnett, the famed 19th-century investigative journalist, anti-lynching activist, women’s rights advocate and suffragist, suffered such treatment, said Watson, and Wells-Barnett was not one to go along quietly with it. When W.E.B. Du Bois compiled the list of the original founders of the NAACP, he left out the name of Wells-Barnett, even though she had been there, and deeply involved, from the start.

The board of directors, who were nearly all men, said Watson, “were too threatened [because] she was too powerful and articulate and resourceful and strong.” (Read more about Wells-Barnett and her role in the women’s rights movement here.)

For Christie, the historical significance of Saturday’s commemoration was a draw, but so was the opportunity to connect with like-minded women.

“It’s always very important to meet women. And I don’t know what brought me here,” she said, patting the bench on which she sat. “The spirit must have guided me to this lady,” she added, referring to Watson.

In pockets of the crowd, assertions of women’s rights mingled with demands for racial justice. A small group of African Americans made themselves comfortable on a bit of lawn adjacent to one of many fences used to control crowd traffic. On the fence, they posted a row of hand-made signs, including one that read “Women Vote, Too.” A line of six quaintly costumed older white women, holding a banner that read “The Raging Grannies” entertained passersby with a version of the “Battle Hymn of the Republic” that featured rewritten lyrics. 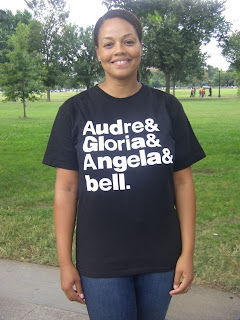 For one young woman, though, the appearance of women at the podium wasn’t quite enough. Emerald Christopher, a graduate student at the University of Maryland, Baltimore County, wore a shirt emblazoned with the first names of famous feminist and womanist writers of color: Audre & Gloria & Angela & bell (in apparent reference to Audre Lorde, Gloria Anzaldúa, Angela Davis, and bell hooks).

Christopher attended the march with her mother. It was fine to have all those women political figures and great to have Evers-Williams address the rally, she said.

But, where, she asked, were the African-American women movement leaders, the thought leaders?

It’s a permutation of a question that has plagued all corners of the progressive movement for decades. But the next generational shift could bring profound change. When the baby boomers who’ve controlled progressive spaces since the 1960s exit the stage, a moment will exist for new leaders. Young women may wish to keep their elbows sharp and their eyes peeled for the opening.