Meet Mark Critz. He got a huge chunk of cash from the Democratic Congressional Campaign Committee last election to hold the seat he’d won in a special election after the death of his old boss, John Murtha. How huge? $2,107,202.86

Murtha was best known for coming out loudly and angrily against the Iraq war–as the chairman of the House Defense Appropriations Subcommittee and a veteran, he was “taken seriously” the way us antiwar ladies usually aren’t. But Murtha wasn’t a dove by nature: he’d voted for the war in ’02, making his claims of being “pro-life” once again a little iffy. 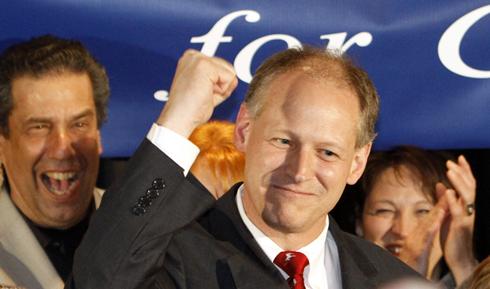 Critz follows in his boss’s footsteps and opposes our right to our own bodies–he’s a cosponsor of HR3 and HR358–the one that would let us die if a doctor thought that saving us might injure a fetus.

Real Clear Politics has some dirt on Critz from his first campaign:

“I’m pro life and pro gun. That’s not a liberal,” Critz says in his own spot.

Critz’s camp also says he opposes a proposed cap-and-trade law, something Murtha voted for when the House first acted on it last year.

These positions reflect the unique character of the district. Democrats have a heavy registration advantage on paper, and Murtha won his seat consistently with little trouble. But it was the only seat in the country carried by John Kerry in 2004 but not by Barack Obama four years later. In the heart of steel and coal country, the Democrats here are far more conservative than the national party, as Murtha was on many issues.

While Critz walks this fine line, his opponent is calling him out. To coincide with Tuesday night’s fundraiser, Republican Tim Burns’ campaign issued a release accusing him of “political double talk,” asking: “If we can’t trust candidate Mark Critz to be honest about his real support for Nancy Pelosi’s agenda, why would we ever send him to Congress?”

“Unique,” eh? Let’s just take five seconds to be honest about why Barack Obama didn’t carry that district. It’s the same reason that I and other people canvassing for Obama got chased off of Democratic-registered doorsteps in Pennsylvania during the Democratic primaries. Race.

Kristen McHugh notes “SW PA (Pittsburgh area, Allegheny County) would probably support far more progressive candidates than we get, but the machine rejects them, even at the mayoral level.” She sent me this post, which has more information about the 12th District, gerrymandering, and interestingly enough calls out from the Right the same things I call out from the left:

Puzzling, isn’t it, why a pro-life, pro-gun politician belongs to the political party that is neither pro-life nor pro-gun. But I suppose the 2 to 1 Democratic predominance in the district might have something to do with that. And Critz had better have very good balance: the longer he tries to straddle that fence over Obamacare, the more likely he is to slip up and hurt himself in a very painful fall.

As in, Republicans aren’t buying it, either.  But John Kerry was a clearly pro-choice politician–anyone else remember the controversy over denying him communion when he was running for president?  And he carried that district in the year that Bush still won the national election. You don’t HAVE to be antichoice to win these areas. (You may still have to be white.)

I’m getting off topic, though. So let’s return to Critz!

Critz’s top donor is a company called Progeny Systems, a defense department contractor, but not by much. Unsurprisingly, given his blue-collar district, he got a lot of union money too.

He’s a Catholic, like most antichoice Democrats (but certainly not all of them–and certainly there are plenty of prochoice Catholics as well).

He voted against Don’t Ask, Don’t Tell repeal, and just this week voted to extend the expiring provisions of the PATRIOT Act–even 26 Republicans broke with their party on that one.  Like Shuler, he voted against the Wall Street Reform and Consumer Protection Act, and he gets a 0% rating from Project Vote Smart as he’s refused to give them his positions. He does get an A from the NRA, though.

None of the bills he’s sponsored thus far have been enacted by Congress.

All of this could become irrelevant, though, if Critz’s heavily gerrymandered district is redistricted out of existence, as Republicans took control of Pennsylvania again this year.

The party invested heavily in Critz despite his “woulda, shoulda, coulda” comments that he’d have voted against health care reform and climate legislation and his demonstrated opposition to LGBT equality. And was that necessary?

After all, as the Christian Science Monitor notes, “Murtha had voted for health-care reform and cap-and-trade, for example, while Critz says he opposed both.”  Sure, Murtha had been there forever, but was it really necessary for his successor, wrapped in his mantle, to come out to his right?

You can ask Critz yourself, of course. Email him through his website, or: