The following was first published at ChoiceUSA.
————

Just another day in the life of an anti-choice wingnut: the American Life League and Jill Stanek are both reporting that, according to 2008 data, Planned Parenthood does little more than offer abortion services.

I wonder why that could be?  Maybe because Planned Parenthood clinics are virtually the only abortion providers in many communities.  They are not adoption agencies and they don’t claim to be, nor are many clinics capable of providing prenatal care.  Rampant survey bias here, and it clearly suggests something that the anti-choicers just can’t seem to get their heads around: women aren’t stupid.  Think about it.  If I’m pregnant and am planning a birth, I’m calling a midwife or an obstetric practice.  If I’m pregnant and thinking about adoption, I’m calling an adoption agency.  If I’m pregnant and considering abortion, well, I’m most certainly calling an abortion clinic!  This “stunning revelation” by the American Life League only proves what we already knew: that many Planned Parenthood clinics provide abortions.

More interesting is the reality of the data that ALL and Jill Stanek are “reporting” on.  The official report, a fact sheet on services provided by Planned Parenthood’s affiliate clinics in 2008, reveals much more than how many women received pregnancy-related services.  In 2008:

The other 1% involves primary care, adoption referrals, and additional services.  Additionally, Planned Parenthood clinics regularly provide non-medical services to the community, including education, support, and outreach.  In other words, ALL and Jill Stanek are running with grossly misrepresented data.  Never mind that the largest chunk of Planned Parenthood’s medical services go directly towards preventing the need for abortion in the first place; no, that fact doesn’t adequately fit the agenda of the antis, and it certainly doesn’t help them paint a picture of a Planned Parenthood that only exists to profit off of women’s abortions.

In all fairness, the American Life League report does address the other services, but only to highlight the fact that Planned Parenthood has seen an uptick in abortion services and a downturn in preventative care clients:

Once again, the American Life League proves it has little expertise in the interpretation of survey data. Failing to recognize cause and effect, ALL jumps to the unfounded conclusion that the data indicates that Planned Parenthood has some underlying agenda to get women pregnant and lure them into the clinics for abortions.  Such conclusions suggest that ALL might be lacking in the social awareness department and are woefully unaware of the economic downturn that became severe during the very year this data was taken.

In September of 2009, the Guttmacher Institute reported that about half of women surveyed said they are delaying getting pregnant or limiting the number of children they have due to economic concerns.  The report, A Real-Time Look at the Impact of the Recession on Women’s Family Planning and Pregnancy Decisions, did report that more women were being careful with their birth control, which does not adequately explain why Planned Parenthood would see a downturn in female contraception patients.  However, 12% of women said they were thinking of switching to long-term contraceptives such as the IUD to cut costs.  This would mean fewer visits to their providing clinic.  Additionally, 18% of women on the pill reported inconsistent use as a means to save money; this could easily lead to an increased need for abortion, not to mention fewer clinic visits to procure contraception.  The report also suggests that many women might be struggling to access contraception:

“Twenty-three percent of surveyed women report having a harder time paying for birth control than in the past … Nearly one out of four women report having put off a gynecological or birth control visit to save money in the past year … Forty-two percent of employed women agree with the following statement: ‘With the economy the way it is, I worry more about taking time off from work to visit a doctor or clinic.'”

But again, if you’re an anti, it’s probably just easier (and convenient) to blame the evil abortion chain. Reality has never been a strong suit for their camp, after all. But, while we’re playing with graphs: 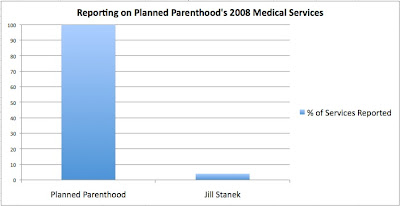 You “may need a magnifying glass” to see the Stanek bar.