The following was first published at CPC Watch.

The National Organization for Marriage, an anti-gay, anti-gender equality, unapologetically theocratic organization, is currently touring the nation in its “Summer for Marriage” tour.  According to the group’s website, the mission of the tour is to “stand up and make it clear that [they] will not let marriage be redefined.”  The NOM claims that “the institution of marriage, the very bedrock on which civilized society rests, has been under attack by radical activists who want to redefine its very meaning.”

Stopping in major cities all over the country, the NOM is promoting anti-gay candidates for office, intimidating local LGBT communities, and attempting to build its ranks.  I say “attempting” because the number of NOM supporters at all stops have been embarrassingly low.  According to the NOM itself, the largest crowd they’ve had at any stop has been in Madison, Wisconsin, with NOM-supporters topping 54 individuals.  The kicker?  Pro-marriage equality and LGBT rights activists outnumbered this “crowd” with a whopping 466. 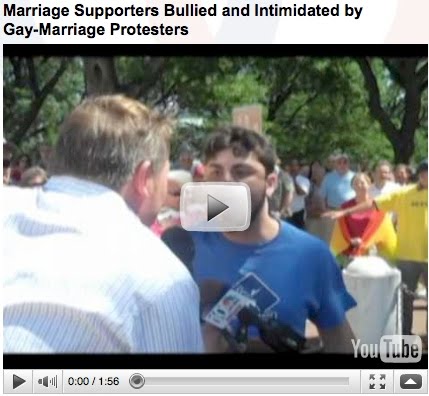 The problem with this, however, is now the NOM can play the victim card.  And play it they have.  Just as their buddies in the anti-choice movement have done in the past, the NOM’s organizers have found a way to convince supporters that their unifying belief in marriage inequality is the majority opinion while simultaneously being a poor, oppressed minority.  Their website is full of terms like “anti-marriage bigots” and “bullied by pro-homo activists;” not surprisingly, these blog entries contain story after story of undocumented (read: conveniently unprovable) “attacks” by the opposing side.  One member wrote that the pro-gay rights activists “frightened small children.”  Now, I’ve been going to demonstrations for a few years now, and one thing I’ve learned is that protests surrounding heated topics like abortion and gay rights are no place for children.  Unless of course you’re parading your children around specifically to prove your… oh, right.

It occurs to me that the NOM may be intentionally drawing small crowds in order to put on just such an act.  In fact, gay rights organizations such as the Human Rights Campaign fathom the same.  From Fred Sainz, HRC’s vice president of communications:

NOM’s highly-touted bus tour is less about so-called ‘traditional marriage’ and more about creating an elaborate and cynical stunt. NOM rolled out a summer of nationwide events in order to draw lawful protesters, all so that NOM and its allies can pepper ongoing lawsuits challenging public disclosure laws with made-up stories of harassment. This unprecedented victimization crusade is the lowest denominator of political activism, and it won’t fly. 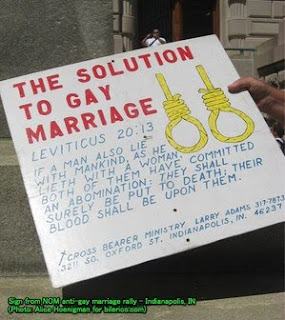 Stunt or not, I still believe it is vital for pro-equality forces to be highly visible at these anti-gay rallies.  These are not your run-of-the-mill homophobes; the NOM draws the worst of the worst to their rallies.  Still, the conservative-fringe nature of the NOM and supporters does not mean they lack political clout.  These highly radicalized organizations, in the vein of Operation Rescue and the Tea Party Movement, carry a high amount of influence over the voting population at large: they are not at all without a financial and social power.

The important thing, however, is not to allow their intentionally infuriating rhetoric lead “our side” to becoming reckless ourselves.  The anti-gay camp (just like the anti-choicers) know their presence is infuriating to us, and in many cases they present themselves in a way that is explicitly meant to incite rage from their opposition, rage that is videoed and edited together to make us look like the bad guys.  This is not to say we should be at all apologetic in our counter-protests and demands for equality, but we need to be aware that everything we do can be used against us.

Now, I am not one of those activists that believes marriage equality will somehow end all discrimination against the LGBT community.  How could it?  But I do believe that the “traditional marriage” camp is using marriage specifically to target the LGBT community as a whole, not to mention couples and individuals everywhere who refuse to define our relationships in such strictly hegemonic terms.  It’s one of the many things same-sex couples do not have the right to do in most U.S. states, and marriage in and of itself provides a way to not only attack same-sex couples, but unmarried couples, single parents, and couples with egalitarian views and “non-traditional” role sharing as well.  Under the incantation “One Man, One Woman,” the National Organization for Marriage exists to challenge not only LGBT rights, but the rights of all men, women, and everyone in between to choose their own way to express their commitments for one another and define our families on our own terms.

Is your city on the map?  Stand against the National Organization for Marriage in your community by connecting with Equality Across America or GetEqual today!