In recent months, my favorite romantic works
of art, "Emma" on TV and "Bright Star" in theaters, both
featured well-mannered Regency Brits in old-fashioned romances. Cultural
critics love saying that women viewers’ proclivity for costume drama represents
a backlash against sexual liberation, a longing for a return to decorum and
being treated like property. But to me, it’s the opposite. Both film’s visions
of love achieve the goal of being enrapturing and romantic while subtly
critiquing conventional conceptions of love.

This past month PBS broadcast a new adaptation of "Emma," Jane
Austen’s novel about a heroine, "handsome, clever, and rich" but also
spoiled, willful, blind to the feelings and attachments of all around her. As a
die-hard Austen fan, I never used to think of "Emma" as a love story
but rather a story about a woman’s self-realization. Then I re-read it and
watched the series this January, and I found it to be one of the most
thoughtful portrayals of love I’ve ever encountered. 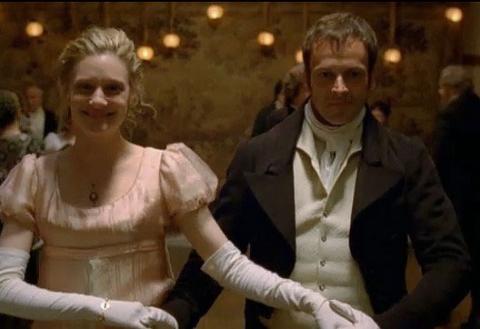 Austen champions enduring love over socially-constructed conceptions of
romance. She invariably presents her heroines with two choices: a charming,
witty, attractive "rake" and a hero who lacks such outward appeal but
who has a hidden reserve of goodness and intelligence. The fact that
pinup-worthy actors like Colin Firth and Johnny Lee Miller play Austen heroes
makes it easy to forget that these male characters are not the obvious romantic choices. They are initially overlooked by
Austen’s heroines, ignored for the kind of men who sweep women off their
feet–the kind of men that conformed to popular conceptions of heterosexual
romance, the kind of men women were supposed to
fall for.

But as Austen’s heroines grow and begin to notice the inner character of the
heroes, they begin to find these men desirable too. Emma herself spends much
time flirting with the charming, impulsive Frank Churchill who fits her
stereotype of the ideal lover. But she can’t get her emotions to rise to the
task of truly caring for him. Only after much anguish and soul-searching does
Emma recognize her true love in her lifeling friend Mr. Knightley, who is far
from dashing, but instead upright, loyal and unwilling to give her a pass when
she acts selfishly. Emma first notices Mr. Knightley’s physical attractiveness
when he kindly dances with a girl who has been snubbed by another man. He in
turn almost kisses her when he finds out she’s paid a visit to a poor widow
whom she’s mistreated in the past. The story seamlessly combines real romantic
attraction and blossoming love with burgeoning admiration and respect–the
foundations of an equal partnership. Knightley loves Emma for her open heart
and lack of affectations, while she loves him for his considerateness about
others’ welfare, something Frank lacks. Perhaps the best example of their brand
of love is that Mr. Knightley agrees to sacrifice his independence and status
as master of his own house to move in with Emma and help her follow her best
impulse: caring for her aging father. It sounds prosaic, but it’s stunningly
touching.

These kinds of matches are all very well in Austen’s time, where women were at
risk of being imprisoned by husbands or abandoned and shamed by seducers. But
in today’s culture, women are still sold a bill of
goods about romance. We’re still told to value a flowery, false construction of
love over that more prosaic, more durable, more real version. On Valentine’s
Day, we’re expected to participate in a charade of expensive wooing, to be
disappointed if we don’t get flowers, chocolate, an over-the-top night out. But
Austen would be suspicious of the man who brings the huge bouquet and tries to
make the priciest dinner reservations. She would ask whether he would be
willing to help you care for your family, whether he’d value your intellect,
whether he’d help you be your best self (and vice-versa; her stories are
peopled with examples of men who marry "silly" women for their beauty
and charm and find them unsatisfying partners).

Austen would find the hoopla over Valentine’s Day absurd, and she wouldn’t
excuse us for buying into it. She would be severe on women who privileged
potential diamond-givers over potential partners–just as she’d be severe on
men who chose arm candy over equals.

It makes sense to reject false social ideals of romance. But what if a person
you fall for is intrinsically romantic, or is in fact one of the famed
Romantics? My favorite movie of the year was Jane Campion’s "Bright
Star," which turned the "muse" trope on
its head by telling the story of poet John Keats from the perspective of his
wonderfully vivacious, unconventional "minx" of a love interest,
Fanny Brawne.  This story takes place at the same time as Austen’s, among
a slightly less genteel, more bohemian milieu. Instead of doing the expected
thing and portraying Brawne as the woman who inspired Keats, Campion asks us
what it would be like to be that woman, a curious
and eccentric teenager who happened across one of the world’s great, doomed
geniuses and fell deeply in love with him.

"Bright Star" is a slow-burning, sad love story which uses
breathtaking cinematography and shots of nature in bloom and decay to
illuminate the inner lives of its characters (tonally, it reminds me most of
one of my other favorite tragic love stories, "Brokeback Mountain"). Campion resists
nearly every impulse to portray Fanny as "the woman behind Keats" and
instead just tells the story of their love, describing the social and economic
obstacles the young couple faced, the post-adolescent moodiness they
experienced, the ultimately-transcendent connection they shared.

The relationship between Fanny and her mother is another beautiful aspect of
this film. Fanny’s public romance with Keats, who has no money and no prospects
for it, subjects the family to scandalous gossip. Mrs. Brawne is deeply worried
that her daughter will be penniless. And yet she sees how much Fanny cares for
this man and she can’t bring herself to stop the romance, against all her
social inclinations. It’s one of the most moving, least cliched mother-daughter
relationships I’ve ever seen onscreen.

The openly-feminist Campion was snubbed by the Oscars this year, despite
universally-rave reviews. It’s possible that if she had told this story in a
more traditional, "Shakespeare-in Love" manner–with a burning,
amorous poet and a delicate, conventionally-gorgeous woman as his muse–the
film would have gone farther and gotten more attention. But she in fact takes
this legendary romance and brings it down to earth, casting actors who look
like real people, making us understand that no matter how immortal Keats’ words
were, his love was of a time and place, and it both fulfilled and hurt its
participants. To Campion, love is flowers in bloom and poetry, but it’s also
sickness, and loneliness when your partner is away, and worrying and sacrifice.
"Bright Star" is a radical take on romantic love that’s easy on the
eye, and given how Keats’ real story ended, heartbreaking.