This interview is published in partnership with Zina Saunders and originally appeared on her site as part of her stunning series of painted portraits and interviews with gay
couples, entitled Love and Marriage, ©Zina Saunders 2009.

I was dismayed earlier this month when the New York State Senate
voted down the gay marriage bill, and I decided to interview and paint
long-standing gay couples, both men and women, and ask them about their
stories and their relationships and what marriage means to them. This
is the first of the series.

On a recent rainy afternoon in
Brooklyn, I sat down to talk with writer and communications specialist
Nancy Goldstein and syndicated cartoonist Joan Hilty, whose marriage in
Provincetown in May of 2004 has been recognized in New York State since
July of 2006. With their dog Juno trying to get in on the conversation,
Nancy and Joan talked about love and marriage. 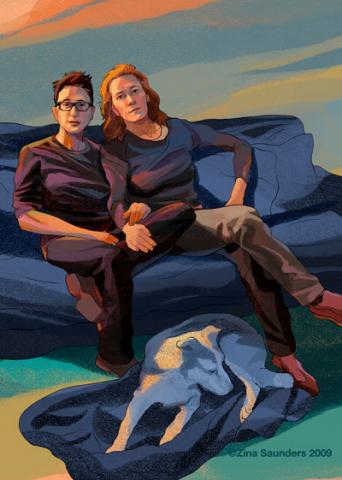 This is the first profile in my series, Love and Marriage, interviewing and painting long standing same-sex couples.


Joan:
We met online in the early, early days of internet dating, in mid-1999.
It was on a lesbian/gay dating website called Edwina.com. Its icon was
a little guy dressed up as your "Aunt Edwina who only wants the best
for you". You could browse other people’s personals, and only get an
idea of them through the quality of their writing because there were
barely any pictures up yet or videos or songs or anything.

Nancy: The chick you chose me over did have a picture of herself up with a cowboy hat. But she overused the ellipsis.

Joan:
Yeah, and no capitalizing, no nothing. But there was Nancy, who wrote
beautifully and talked about all the great places she liked to eat in
Prospect Heights, which was just a neighborhood away from me, and that
one was interesting to me.

Nancy: We wound
up meeting on a Sunday and staying up until one in the morning talking;
we just went from place to place as they closed down on us. And then we
went home and she didn’t call me. I subscribed to the Brooklyn Museum,
because the controversial art exhibit Sensation was going to be there,
so I could call her and say: I have an extra ticket to the opening of
Sensation. But when I called her, she was busy, and then she showed up
late for our second date. So I thought: She’s just not interested. But
our second date was lovely and we stayed up way late again.

Joan:
We were both wary of getting into a relationship at first. Nancy came
into warily because she had been dating unsuccessfully. I had had yet
another disastrous relationship breakup over the summer, but once we
started dating seriously, we were only a neighborhood away from each
other. So I would go over to her place and spend the night, and she
would come over to mine and spend the night, and we started spending
more and more time at my house until we just started to say, you know,
we’re actually finally comfortable sharing space.

Nancy:
We had both come out of relationships with people who wanted kids like
that [she snaps her fingers] and both of us are pretty independent and
I never thought Joan would want to get married again.

Joan:
I had been in a long-term relationship for almost eight years, with my
college girlfriend. When civil unions became legal in San Francisco in
1990 we went and signed up. We broke up in ’96 and in fact, had to
annul it, or whatever, in order for Nancy and I to marry. Actually I
should back up and say it wasn’t even a civil union, it was a domestic
partnership.

Nancy: Gradations of rights,
and of course, each state or city can define them differently. The joke
in New York was that domestic partnerships for gay people, back in the
‘90s, was when they were first granted the right to visit their partner
in jail. And then civil unions, of course, vary from state to state.

And
then there is marriage which has all the same benefits for same sex
couples as cross sex couples, except the federal benefits which include
things like immigration, inheritance, retirement benefits and health
insurance.

We were married in Massachusetts in 2004, and
right now, New York’s laws recognize the marriage as legally performed
elsewhere, but our legislature won’t allow marriages to be performed
here.

I just want to say off the bat, that I don’t think
that marriage should be the vehicle for the distribution of rights. I
really, really don’t.

So I just want to say that having said that, it’s also clearly the only vehicle for a number of rights that I want to have.

Neither of us were people who ever really wanted to get married. It wasn’t a childhood dream. It wasn’t even an adult dream.

Nancy:
Obviously marriage is completely different for us than our feminist
heterosexual friends: for them, marriage is the ultimate sign of
conformity, and knuckling under and doing everything their parents
expect. For you it’s compliance, for us it’s defiance.

We
decided that we would get married and the further we got into it, we
knew it was a civil rights issue and we knew we wanted to be there
pushing the envelope on it and we also knew that we wanted to get
married in an atmosphere where people are happy for us. So we arranged
to register on the very first morning, of the first day that it was
legal to get married in Massachusetts.

And then Mitt Romney
evokes the 1913 anti-miscegenation law that Massachusetts passed when
Jack Johnson, the black boxer, married a white woman. And that law says
that Massachusetts will not marry an out-of-state couple whose marriage
is not recognized in their home state.

Joan:
This was the way that states like Massachusetts, which was your big
freedom-from-religious-persecution state, could still honor Jim Crow
laws.

And this is what Romney pulls out of his back pocket
to put a stop to same-sex marriage: a law that is blatantly rooted in
racism.

Nancy: And the next Governor of Massachusetts, Deval Patrick, made sure that’s one of the first laws to be repealed.

Joan:
But it’s really the federal law that needs to change, because it can be
legalized in all 50 states and if the Feds don’t legalize it, there are
still 1,084 rights that are federally provided to straight couples that
gay couples cannot have, because something can be legal at the state
level, but not at the federal level. So we are legally married by a
state, but not in the eyes of the federal government, because of the
Defense of Marriage Act [DOMA].

Nancy:
Under DOMA, passed under Bill Clinton — as his sop to Newt Gingrich,
thank you — and not reversed under President Obama — who was going to
be such a big champion of gay rights, thank you — if I died tomorrow
and left everything to Joan, Joan would be taxed 50 percent on it. If
you die tomorrow and leave everything to your husband, he pays no tax
whatsoever. So think about this: if you own a $500,000 apartment
together, you would suddenly have the burden of paying 50 percent taxes
on a $500,000 apartment.

So the big difference is in our
pension rights, inheritance, and immigration; if Joan was from another
country, our marriage would not make her legal, which it does for
straight people.

Joan: I do believe within
my lifetime that DOMA will be overturned. It’s exciting when gay
marriage passes, in a state like Massachusetts, and it’s heartbreaking
when it doesn’t, in a state like New York, but it keeps coming up. It’s
coming up now, overlapping every six months or so, in states and
regions that nobody expected, and my feeling is that it can’t be
stopped.

Nancy: There are going to be too
many states that legalize it for the federal government to ignore the
issue anymore. It’s like a snowball rolling down a hill and you just
will not be able to stop it, it will be forced to address it.

Joan:
Things have changed so much in the last three or four decades, that now
I would say across the US in general, and not just on the coasts, more
and more people have at least one gay person in their lives, or are
familiar with gay celebrities whose gayness is talked about openly and
not whispered about. It’s just becoming less and less an issue for
people.

Nancy: This has all been an
educational process. I want to say that I use the word "marriage" and I
use the word "wife", because they are the words that are most likely to
make both conservative people and pseudo-liberals uncomfortable. And
also is because I want people to know, for damned sure, that I am not
trying to hide the gender of the person I am talking about: she’s not
my "partner", she’s not my "spouse". But the word “wife” is not
something I ever wanted to be or have – but in some ways it’s like
reclaiming the word “queer”: that you take the most despised term and
you say, wouldn’t the coolest thing in the world be, to take this
weird-ass term that means all of these horrible things and have it turn
into something really kind of fabulous.

So I use the term
wife, but we’ve seen it make plenty of our liberal friends and
relatives uncomfortable – because what I say when I say wife, is I’m
saying, I got the same thing that you got. I didn’t get an imitation of
it, this isn’t a faux ring, I got married, here is my certificate, here
we are.

I don’t think this is an instant prescription, and I
don’t think it happens to everyone who gets married, but for me, I love
being married. I love our home; it’s warm, we’re always cooking
something, we get along with each other, we have a dog, and it’s just
lovely. When there’s a public figure in the news, talking about our
right to marriage — especially a straight public figure, like when
Gavin Newsom says of course, people should be able to get married, of
course, it’s discrimination that they can’t — that’s when I usually
find myself crying. Because it’s such a basic, basic, recognition of
humanity and it’s so cruel and ultimately will be so futile to deny it
to people.

Anyway, I love it, and I have to say, our
relationship did change for me, after we got married. And I never would
have expected it to. I mean, if you had said to me, do you think you
would have wanted children more if you were married, I wouldn’t have
said yes. But the feeling of safety, I think over time, the feeling of
sureness, the feeling of being held by something, has increased for me,
and I totally dig it.