Unsurprisingly, human beings have
used and experimented with various methods of birth and fertility control
since the beginning of recorded history. Furthermore, birth control’s status
as taboo, acceptable or somewhere in between the two has varied over
time and across cultures. The history of fertility control reveals that it’s a practice common to almost all times and places — and dispels the myth that birth control is a selfish demand of the modern woman.

Although the sperm cell, egg
and the intricate mechanics of reproduction would not be discovered
until the advent of tools like the microscope, it is clear that the concept of preventing the exchange of fluids was understood
and used by many ancient communities.

According to a curriculum guide
by Kathleen London at the Yale-New Haven Teachers Institute called "The History of Birth
Control" (and
according to common sense, too) the most common pre-medical form of
birth control was coitus interruptus, or "pulling out," which was
frowned upon by Jewish and Catholic authorities but still used. Coitus
obstructus, which involved applying pressure to block the release of
semen, was advocated by some ancient Sanskrit texts.

But as we know today, these
methods have high failure rates, and just as today we have come up with the
pill, the patch, the ring, and multiple barrier methods, it appears
that our ancestors got quite creative in their efforts to plan their families.

Perhaps the most intriguing,
bizarre and possibly effective methods for birth control were pessaries.
In London’s words:

A pessary is a vaginal
suppository used to kill sperm and/or block their passage through the
cervix. The pessary was the most effective contraceptive device used
in ancient times and numerous recipes for pessaries from ancient times
are known. Ingredients for pessaries included: a base of crocodile dung
(dung was frequently a base), a mixture of honey and natural sodium
carbonate forming a kind of gum. All were of a consistency which would
melt at body temperature and form an impenetrable covering of the cervix.

The crocodile dung pessary,
in case you were wondering, was a specialty of the ancient Egyptians who also used various
mixtures of honey, acacia, dates, carob and cotton as pessaries. In India, incidentally, the preferred
form of dung was that of the elephant. Another method used in India
was salt soaked in oil. Why these specific materials, you ask? Not only
were the consistencies right for creating a barrier, but some of these
materials such as dung had spermicidal properties. Giovanni Giacomo Casanova,
of endless fame for his romantic prowess, encouraged his (many) lovers
to use squeezed lemon wedges as barriers, while rudimentary medical
versions of the cervical cap, from fitted rubber implements to sponges,
were used in England and America in the 19th century.

Of course, there were also
less successful and logical methods. A
paper on the history of birth control at the Planned Parenthood website (Jon Knowles is the primary author)
points out that in medieval Europe, superstition was often substituted
for even the rudimentary science.

During the Middle Ages
in Europe, magicians advised women to wear the testicles of a weasel
on their thighs or hang its amputated foot from around their necks (Lieberman,
1973). Other amulets of the time were wreaths of herbs, desiccated cat
livers or shards of bones from cats (but only the pure black ones),
flax lint tied in a cloth and soaked in menstrual blood, or the anus
of a hare. It was also believed that a woman could avoid pregnancy by
walking three times around the spot where a pregnant wolf had urinated.

And beyond the spells and patients,
one of the cruder ways communities controlled population was infanticide,
often by exposure. This practice, often aimed at girls, was so widespread
that it remains a common trope in folktales, fairytales, and ancient
literature from around the world.

According to the Planned Parenthood
paper, "Africans and Native American women of the 17th and 18th centuries
were among the first to actually understand their fertility cycles well
enough to plan their families." Women in these societies caught onto
the idea that keeping track of their cervical mucus was one way of understanding
how fertile they were at a given time, enabling them to decide whether
or not to abstain. In the western world, it wasn’t until 50 years
ago that cervical mucus monitoring was backed up by science. In combination
with body temperature and calendar, it was integrated into the the "sympto-thermal"
method of birth control.

As for reliance on the calendar
alone, many societies have attempted some variation on "the rhythm
method" but it rarely worked. Science did not verify the proper (but
still fallible) way to use this method until the last century.

From French cave paintings
to Egyptian art, images of condoms abound in ancient, even prehistoric
times, although whether they were used for contraceptive purposes is
unknown.

The oldest archaeological condom to be discovered, was made of lambskin and dated from the 17th
century in Scotland. Historians posit it was used to prevent STDs during
the English civil wars. 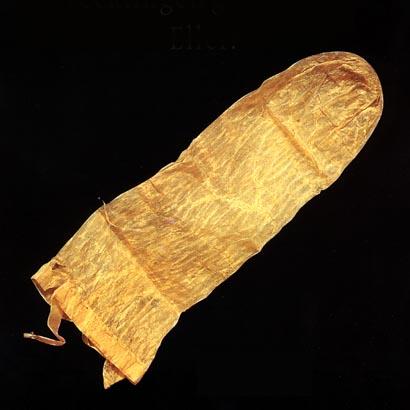 In more Casanova facts, the
famous lothario professed to using condoms made of linen. Meanwhile,
the rubber condom became widely available in the 19th century
when rubber was mass produced by – yep, the Goodyear clan.

However, it was still considered
"immoral" to distribute condoms to American WWI soldiers, and only
in WWII did the army deem that the health benefits of condoms outweighed
the risks.

Taboo or Must Do?

This is just a brief overview
of the different kinds of contraceptives used over time. But it’s
clear from their mention in several authoritative texts and widespread
use in ancient societies from India to Egypt to Europe that contraception
was not always forbidden; in fact it was often seen as necessary. Western religious
authorities have frowned on the practice as contraception appears to
run counter to biblical directives about being fruitful and multiplying – but
apparently people have been disobeying those authorities since the beginning,
too.

Kathleen
London writes that
one of the reasons abortion and birth control went from accepted folk-remedies
to taboo in the US coincided with the transfer of medical care from
women nurses, midwifes, and relatives to mostly-male doctors who were
more apt to disapprove of female sexuality. Population needs have also
had a strong influence on the "morality" of abortion and birth control-during
flush times; birth control has been discouraged when the demand for labor needs and
soldiers for armies is at its height. In times when survival was dicier, it may have been less of
a problem to limit childbearing. Today, as this site attests to, we’re
still engaged in a fight for recognition of the ethical and health benefits
of wide access to contraception.

The above information were
gleaned from the following sources, which are just at the tip
of the iceberg when it comes to exploring the history of birth
control.  Besides the methods listed above you can learn about the history
of abortifacents, douching, menstrual taboos and other traditions around
the world. And if you’re in Cleveland, be sure to visit the hall of contraception at Case Western Reserve University.

Article about the opening of museum
of contraception

Interview with curator of
museum of contraception