Abortion shouldn’t be a crime, according to opinions of the majority of people polled in some of the world’s most populous countries.

WorldPublicOpinion.org released data yesterday that shows that only 18 percent of people polled in 18 countries favor criminal penalties such as fines and imprisonment as a means to prevent abortion. Yet the laws of most countries that restrict abortion make criminals out of providers who perform abortion as well as women who seek abortion.

In other words, even if they disagree with a woman’s decision to have an abortion, people don’t want to see their sisters and daughters jailed for their reproductive health decisions.

The discord between the law and people’s opinions is starkly illustrated in an advocacy video created by Ipas Brazil, who is working to change the restrictive law that imprisons a woman for up to three years for "consenting" to an abortion. The video talks to people on the street and asks first whether they are for or against abortion (all answer "against"), then whether they know someone who has had an abortion (yes, they do) and finally, whether that person should be imprisoned.

This last question is met with confused and sometimes surprised silence. The final message of the video? "Think about it."

It’s in Portuguese – but you’ll get the gist of it!

Certainly with polling, the choice of questions is everything. And the questions chosen by WorldPublicOpinion.org and featured in the Ipas Brazil video bring to light what it means to make abortion illegal.

We’re not talking about simple disproval of someone’s health choices – abortion laws aren’t an abstract policy expression, like the Sense of the Senate. Abortion is penalized with fines, or in many countries, prison, which is one of the ways that governments control people’s choices (here in the U.S. we’ve got the Hyde and Helms amendments).

Women have abortions, regardless of the law. And, since most of us know someone who has had an abortion, the thought of criminal penalties for that woman or for the medical provider who helped her is very unsettling, regardless of whether we think abortion is okay.

The polling data released today shows that public opinion is on the side of less government interference with women’s choices around abortion. In Poland, Mexico and South Korea – three countries with restrictive abortion laws – the majority of those polled stated that decisions about abortion should be left to the individual.

Here in the U.S., where Congress recently enacted and the Supreme Court upheld a two-year jail sentence for doctors who perform a specific abortion procedure, only eight percent favored criminal enforcement of abortion laws. 69% of those polled were in favor of leaving the decision to the individual. 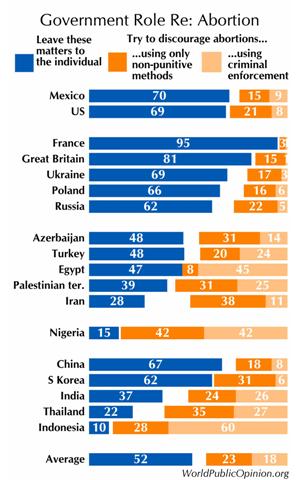 WorldPublicOpinion.org polls in 18 countries, which they purport to represent 59 percent of the world’s population. However, there is a dearth of opinions from places where unsafe abortion is a high contributor to maternal mortality. Half of the world’s 67,000 deaths from unsafe abortion take place in Africa, but Nigeria is the only African country represented in the data. More data from Africa and the other parts of the global south, where restrictive abortion laws are major contributors to the loss of women’s lives, would have made for interesting comparison.

That people are opposed to the criminalization of one of the most common medical interventions is at the very least, logical. At most, the polls can contribute to a growing movement to reform abortion laws around the world.

To ask the question of criminalization helps move the discussion beyond the rhetoric of morality, maybe even beyond the statistics of unsafe abortion. Restricting abortion by law can make a criminal out of an often desperate woman who seeks medical care or the provider that helps her. When advocating for legal reform, how the law treats individuals we know is something everyone should think about.

For the Center for Reproductive Rights’s map and fact sheet of abortion laws worldwide, click the image below! 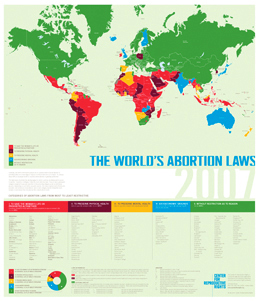