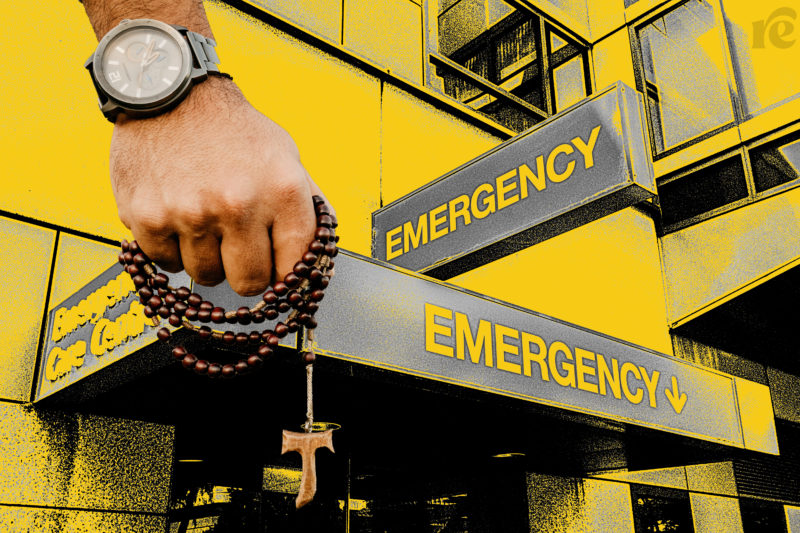 As an OB-GYN resident at a major Catholic hospital in Chicago from 2005 to 2009, Dr. Maryam Guiahi was not only forbidden from providing patients with abortions, birth control, or tubal ligations herself—she was also discouraged from informing patients that in her best medical judgment, they should seek care elsewhere.

“We had to wait until they got sick,” Guiahi, now a physician-researcher practicing in California, told Rewire News Group about how she would have to send patients miscarrying desired pregnancies home to wait until they developed potentially life-threatening complications. Only then could she intervene. Her patients were mostly low-income women on public assistance. While her hospital would provide abortion care or sterilization under certain circumstances, she had to apply through her department chair, a devout Catholic, for approval.

But when she would apply for a “uterine isolation”—a Catholic euphemism for tubal ligation—she noticed that her patients on private insurance seemed to be approved much more easily than her patients on Medicaid.

“It would take three or four c-sections for [the hospital] to approve those patients,” Guiahi said, “rather than two or three,” for wealthier women. Each successive cesarean increases the chances of a patient experiencing a life-threatening complication. And for every patient that asks for but does not get their tubes tied, nearly half have an unintended pregnancy within the next year.

Doctors working in Catholic facilities often find loopholes to provide desperately needed care—and they usually manage to do it before a patient dies. Multiple experts interviewed for this article suggested that in fact, Catholic hospitals in red states may wind up helping more patients than secular hospitals, simply because their largely secular staff are more skilled at working theocratic systems.

David Slusky, a University of Kansas economics professor, found that women of color, particularly Hispanic women, are more likely to be denied tubal ligations at Catholic facilities. Yet, women of color and those without a college education disproportionately rely on sterilization as a form of birth control. Worse, patients often don’t even know the hospital they’ve gone to for care is Catholic in the first place. Some Catholic hospitals don’t show any visible affiliation to the religion—but they still have to abide by Catholic doctrine.

“Zombie” hospitals as a religious institution

Religion and capitalism don’t mix. So why do we continue to allow Catholic hospitals to blatantly mix corporate mergers with communion?

Elizabeth Sepper, a law professor at the University of Texas at Austin, believes the public has been hoodwinked.

“There’s a myth of nuns caring for the poor in a charitable setting,” Sepper said. “That’s not what modern health care is in the United States. Nonprofit hospitals in the United States are not charities. They are not focused on providing care to the poor. They don’t operate through revenue from the church or from donations, but rather are funded at about two-thirds of their revenue by federal and state governments.”

The U.S. government grants broad freedoms to religious institutions, designed to foster pluralism, diversity, and the free exercise of religion. But those freedoms were designed to apply to only a small number of institutions, like churches, synagogues, religious schools, and religious hospitals. In other words, institutional religious exemptions were never intended to impede the rule of law.

At one point, most Catholic hospitals were small, owned and operated directly by female religious orders. But that hasn’t been the case since the 1980s. As nuns sold their hospitals to secular owners, they wrote religion into the sales contracts, some with millions of dollars in penalties if the new owners failed to fall in line with church hierarchy. These penalties can apply across multiple sales; in other words, a hospital on its second or third secular owner—with no meaningful Catholic identity—may still abide by the ruling of the local bishop.

Sepper calls these corporations “zombie” hospitals. Because they still qualify as a religious institution, zombie hospitals may legally break federal law in various ways: They discriminate in hiring, underfund and underinsure pension plans, and pay fewer taxes than secular institutions. Religious exceptions are so financially attractive and allow corporations to skirt so much federal law that otherwise secular institutions have little incentive to break their contractual ties to the Catholic Church. Freedom of religion, historically a narrow but deep exception in U.S. law, becomes a tawdry tax loophole large enough to drive a truck through.

That tax loophole burdens individual religious freedom. Like Guiahi, most of the physicians and nurses working at Catholic hospitals are not devout Catholics. But in an un-American twist, corporations force them to put their own consciences aside.

Moral injury and distress are not new

When physicians like Guiahi are forced to deny patients the care they know is best, they can experience “moral injury,” or moral distress. Known to lead to PTSD in health-care workers, moral injury only recently came to public attention with the COVID-19 pandemic. Doctors and nurses forced to ration lifesaving health care as an already broken system crumbled around them died by suicide and experienced trauma and depression in record numbers. But in Catholic hospitals, moral distress is nothing new.

The ownership of Catholic and zombie hospitals compels Jewish, Muslim, and most Christian employees to practice a faith not their own, against their best scientific and moral judgments. In 2011, a national survey showed 52 percent of OB-GYNs working at a Catholic hospital had experienced moral conflicts with their institution’s policies—compared to 17 percent at Protestant hospitals and 9 percent at Jewish hospitals. As abortion bans tighten their grip, two things will happen.

In blue states, Sepper believes we haven’t yet hit bottom.

“The dominance of Catholic health care is going to present a real obstacle to achieving goals of ensuring abortion access to in-state and out-of-state residents,” she said. “I think it’s going to get worse.”

In red states, Sepper predicts an ongoing battle over the Emergency Medical Treatment and Active Labor Act. In both scenarios, the number of health-care workers experiencing severe moral distress will only increase.

“Why is it OK that that little remote struggling hospital becomes a reproductive care-free place?” said Freedman, the sociology professor. “Reproductive health care is always considered so dispensable.”

Catholics for Choice President Jamie Manson never wants a Catholic institution to be forced to provide care against their beliefs. But when mergers, zombie hospitals, and opportunistic secular hospitals stretch the definition of a “religious institution” beyond belief, she draws a line.

“When you see Catholic hospitals merging with secular hospitals, the bishops become the final arbiter of what medical care they will and won’t get,” Manson said. “That’s very hard on poor neighborhoods. It’s always the most vulnerable who suffer the most from these mergers and the care they’re denied.”

Patients suffer the brunt of these policies. As a committed Catholic, however, Manson points also to the undue burden such hospital policies may place on an individual physician’s spiritual conscience.

With corporate capitalism dressed as religious “freedom,” Catholic hospitals violate a core tenant of catechism: the primacy of individual conscience in all moral decision-making.

“Thomas Aquinas, one of the most influential theologians in the history of the church, said that our conscience is a gift from God, and when law and conscience conflict with each other, you must follow your conscience,” Manson said. “To go against it would be to go against your human dignity.”

But every day, in every Catholic hospital across the country, more and more health-care workers must choose between their human dignity and their ability to provide for their families.

Of course, in the United States, the bishops who control church hierarchy also hold the power to dictate what a well-formed conscience looks like. But Manson insists this is not true to Catholic tradition, or to how Catholicism interacts with other governments across the world. She said that in the U.K., a Catholic school must still teach a sex-ed curriculum. The United States is the global exception, not the rule.

One patient still sticks out in Guiahi’s mind from her time at the Catholic hospital.

Midway through her second trimester, the patient was already bleeding from a chronic placental abruption, when the placenta starts to separate from the wall of the uterus. The complications increased her risk of hemorrhage—and her wanted pregnancy was already doomed.

The best practice for this type of case is dilation and evacuation, a safe procedure to remove the placenta and fetus from the uterus with minimal blood loss. The surgery was forbidden. Besides, the religious restrictions on staff training in abortion and miscarriage management meant was no one at the hospital was trained to do one safely, even were it allowed. To make matters worse, the patient was a devout Jehovah’s Witness who refused to consent to blood transfusions.

“She was never even offered the standard of care,” Guiahi said. Instead of a simple outpatient procedure, she underwent a high-risk c-section. If she had hemorrhaged during the surgery, the staff would have had to let her bleed to death.

Guiahis patient survived, but the chance of her having a c-section, uterine rupture, or placental complication in a future pregnancy shot up exponentially—for no reason.

When we talk about Catholic hospitals, we often discuss whether pregnant people die from negligent care, as if whether someone walks out of the hospital alive is the only relevant metric. But injustice comes in many forms, and it affects both provider and patient.

Guiahi, for example, was a medical resident when asked to follow the church directives. Young physicians, particularly Black doctors, often enter their training programs nearly a quarter of a million dollars—or more—in debt. Like patients, they are often unaware of the restrictions Catholic hospitals place on nationally accepted standards of care.

If a trainee physician is fired from a Catholic residency program after refusing to violate their conscience, they face the prospect of never paying off over $300,000 in loans. Entering another training program—their only viable path to financial solvency—after being fired from residency can be next to impossible.

Beyond the threat of job loss and lifetime debt, economic, religious, and social injustice muddy the water these doctors swim in. Dr. Debra Stulberg, the chair of family medicine at the University of Chicago and a leading researcher on religious restrictions on healthcare, highlights how our broken medical system makes it difficult for young physicians to even pick out the injustice of religious restriction as distinct from the many others—racism, economic injustice, ableism, and so forth—affecting their patients daily.

Under these conditions, many health-care workers simply suffer from moral distress, secondary PTSD, or compassion fatigue, all euphemistically called “burnout” in the medical world.

“When we try to say, ‘Did anything bad happen to you?’ to patients at these [Catholic] hospitals, it takes dialogue for people to recognize that they were impacted by a religious restriction,” Stulberg said. “The same is true for clinicians.”

Stulberg recalls one interview in particular, where a young physician did her residency at a Catholic hospital.

“After residency, she went to a secular clinic—only then could she see how much religious restriction on care had been normalized,” Stulberg said.

After working in a Catholic residency, some, like Guiahi, leave, and dedicate the rest of their career to researching and providing reproductive health care. Others stay, and learn to compartmentalize their consciences and work the system the best they can. Either way, the human dignity of both physician and patient is sacrificed for the corporation.